What were the highest quality photos and knowledge of Uranus and Neptune before Voyager?

From my related question, I'm still in search of historical knowledge of the outer planets. That is, how our understanding of them developed over time.

So right now I'm hunting for the highest quality photos of Uranus and Neptune that we had before Voyager flew by them.

I've looked here since it has a good one of Jupiter, but couldn't find any for Neptune or Uranus. I'm starting to wonder if those last 2 planets would even show up as resolvable disks, given the huge distances and relatively small telescopes of the era. I think the Hale Telescope at the Palomar Observatory was just 5 m wide in its primary mirror.

After googling this for so long, I've come to the conclusion that the best bet would be old astronomy books, which sadly, I do not have. Can anyone help me out?

My 1965 Sourcebook On The Space Sciences indicates that they are resolvable:

The polar flattening of [Uranus] is clear from its telescopic image and the ellipticity determined from the motion of the nearest satellite is 1/18. The result derived from direct measurement of the equatorial and polar diameters is about 1/12, but since the maximum angular diameter of Uranus as seen from Earth is only 4 sec of arc, it is evident that this value of the ellipticity cannot be very accurate...

In the telescope, Uranus is seen as a somewhat flattened spherical body with a greenish color... at certain times a whitish equatorial zone and other bands, similar to but fainter than those of Jupiter and Saturn, can be observed.

Like Uranus... Neptune has a greenish color... Observers have occasionally reported seeing faint irregular markings and a bright equatorial zone on Neptune, but the situation is uncertain.

However, there are no photos of either in the book, unlike Jupiter and Saturn, which both have fairly detailed mid-century photos from Hale-Palomar.

The 1964 English translation edition of Flammarion Book Of Astronomy has photos of Uranus from 1936! A very small disc is visible, with no evident features. No photos of Neptune are in the book, possibly because it would show merely a point. 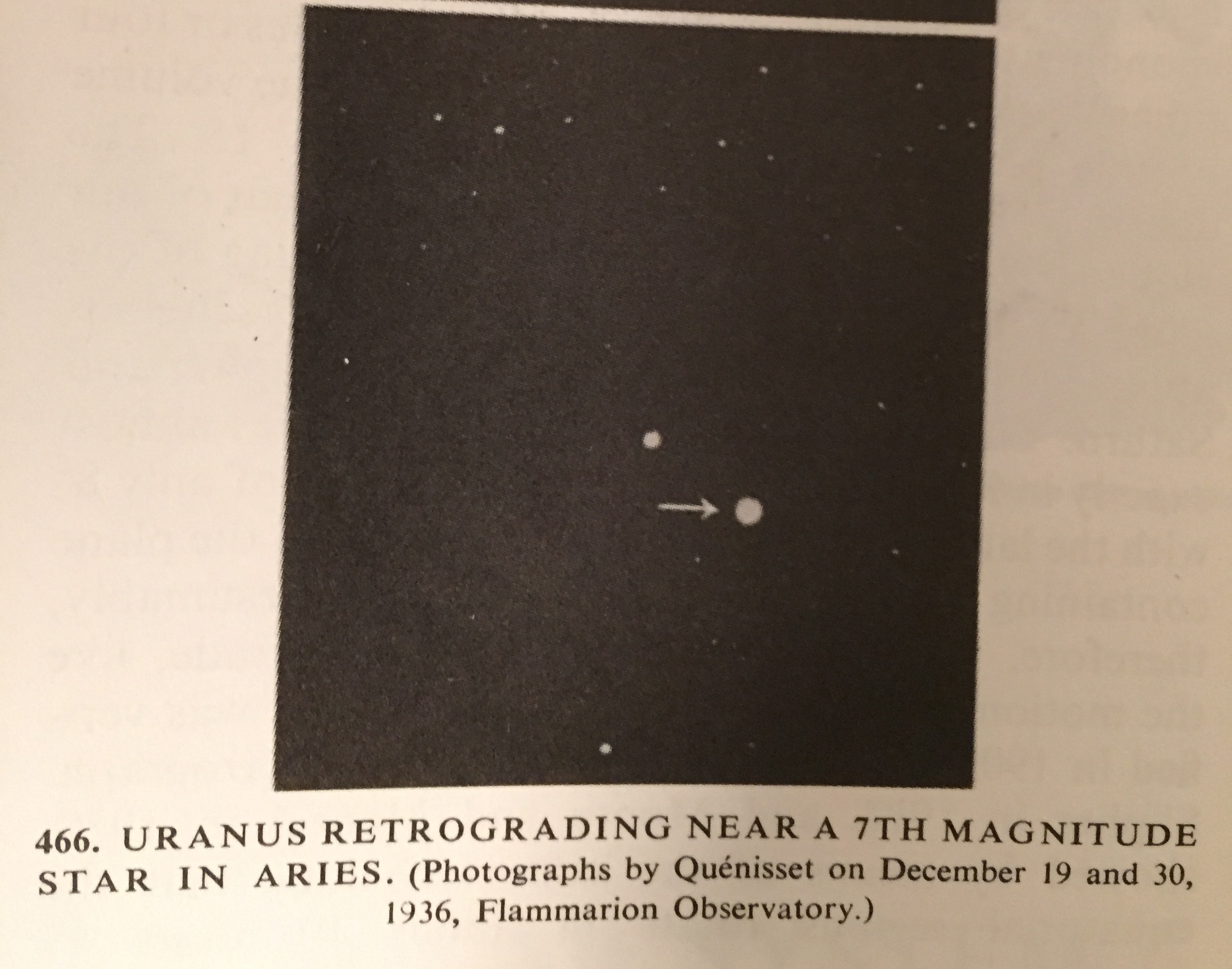 Interestingly, the book has a variety of pictures of Jupiter and Saturn from the 1910s through the 1950s, from different observatories (Flammarion, Lowell). Remarkably, they all show comparable levels of detail in Jupiter, with the main difference, as far as I can tell, being the quality of the photographic film grain.

I believe it's so hard to find a good picture because there wasn't one. The best telescope in the world in the 1980s was Hale telescope at Palomar Observatory. It was a 5m telescope, but subject to atmospheric effects.

Uranus has a resolution of about 18 urads from Earth, or about 3.7 arc seconds.

Pre-adaptive optics, the best one could hope for in terms of angular resolution was around 1 arc second. Given that, it seems that Uranus would be little more than a blur, resolvable, but with no real detail. Neptune would be even worse.

Keep in mind that for the most part, all of the fancy tricks that can be used today to observe planets weren't around. There was no adaptive optics, no digital cameras recording hundreds of frames to find a "lucky" frame, and other similar things. This was a serious challenge of the day, to get good pictures of items like planets.

Also keep in mind that Neptune and Uranus are less colorful than Saturn and Neptune, making photos of them less interesting than would otherwise be obtained.

Not the answer you're looking for? Browse other questions tagged history neptune uranus or ask your own question.

14
Did we know the gas planets were truly gaseous before Pioneer 10?

20
What is the highest number of humans in space at the same time and what vessels were they on when it happened?
15
Is it more challenging to put an airship in the Uranian than in the Venusian atmosphere?
14
Did we know the gas planets were truly gaseous before Pioneer 10?
23
Why didn't Pioneer 11 visit Uranus/Neptune, and why didn't Voyager 1 visit Pluto?
18
Before the Columbia accident, were there shuttle manifests/plans for after ISS assembly complete?
4
What scientific and technological advances were prompted directly by Sputnik 1?
20
Who were the youngest and oldest persons in space?
27
What were the differences between the STS Orbiters?
1
How did NASA fund searches for extraterrestrial life before 1993? How were the searches done?