What level of circuitry is built into the US EVA spacesuit (EMU)?

What is the sophistication of control algorithms used? (PID, discrete logic, $H_\infty$?)

The EMU is not smart at all. It was designed in the late 70s. There is no automated control of the suit. The astronaut controls the suit through the use of switches and rotary knobs on the Display and Control Module mounted on the suit's chest.

The only computer utilized in the suit is for the Caution and Warning system. This simply monitors various suit parameters, formats them for display on the LCD unit, and sets off alarms if they go out of limits.

A small, irregularly-shaped box, the Displays and Control Module (DCM), houses a variety of switches, valves, and displays.

Along the DCM top are four switches for power, feedwater, communications mode selection, and caution and warning. A suit-pressure purge valve projects from the top at the left. It is used for depressurizing the suit at the end of an EVA and can be used in an emergency to remove heat and humidity when oxygen is flowing from both the primary and secondary oxygen systems. Near the front on the top is an alpha-numeric display. A microprocessor inside the PLSS permits astronauts to monitor the condition of the various suit circuits by reading the data on the display.

Stepped down from the top of the DCM, on a small platform to the astronaut’s right, is a ventilation-fan switch and a push-to-talk switch. The astronaut has the option of having the radio channel open at all times or only when needed.

On a second platform, to the left, is an illuminated mechanical-suit pressure gauge. At the bottom, on the front of the DCM, are additional controls for communications volume, display lighting intensity, temperature control, and a four position selector for controlling suit pressure in different EVA operating modes. 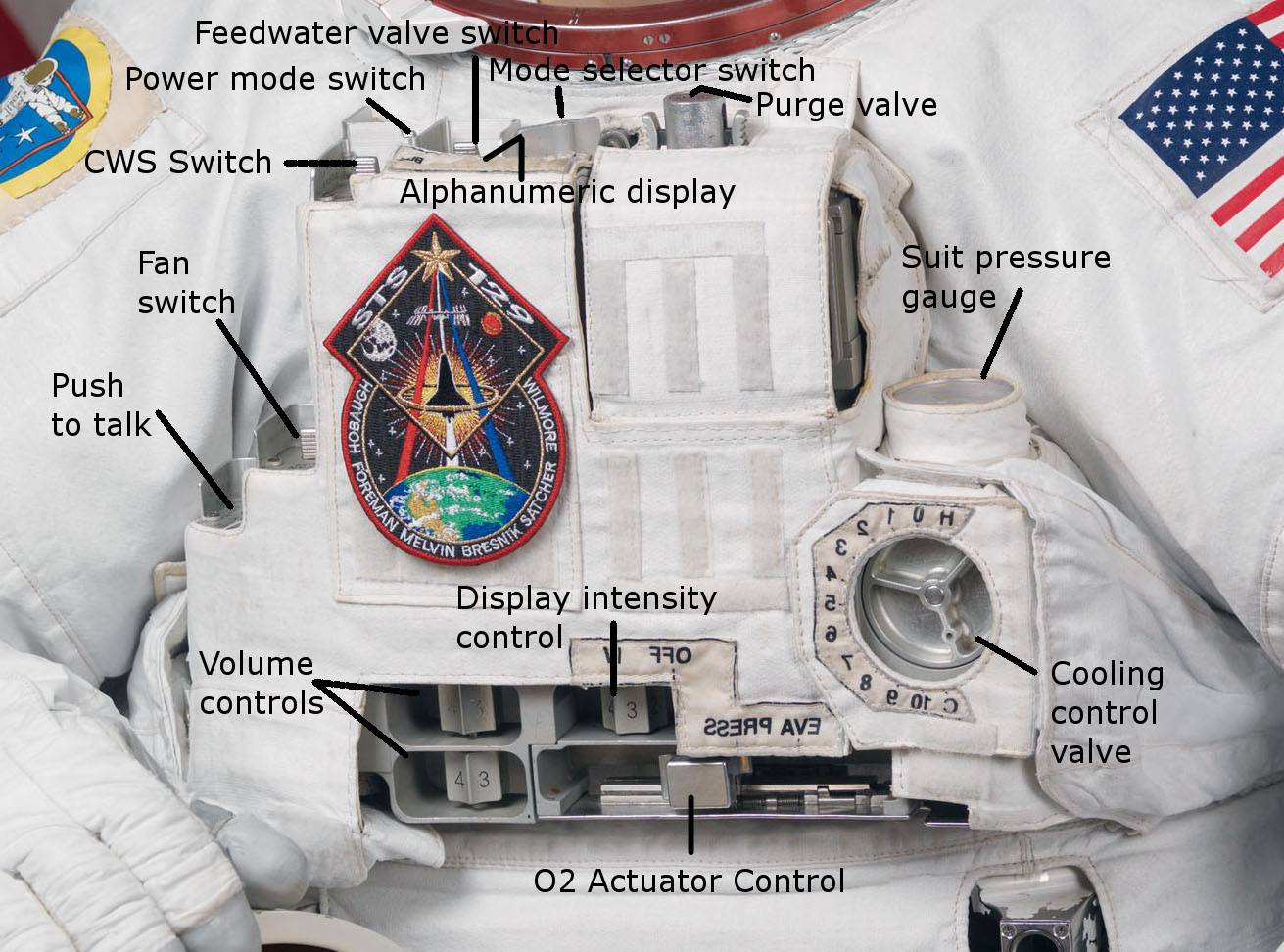 The text is reversed, because the astronaut can only view the controls by using a wrist mirror.

There is some information about the EMU in section 3.4 of the Suit Water Intrusion Mishap Report, but the technical information is heavily redacted, and what is left is actually less informative than the children's writeup.

Since this answer was originally written, an EMU Systems Training Workbook has appeared on the Internet Archive. It contains fairly detailed information on the suit's workings. The Display and Control Module and the Caution and Warning subsystem are described starting on page 3-37. Unfortunately, the manual assumes that the reader has access to the Space Shuttle Systems Handbook for schematics; that document is not publicly available. A partially labeled schematic can be found at NTRS here, I have reproduced it below. 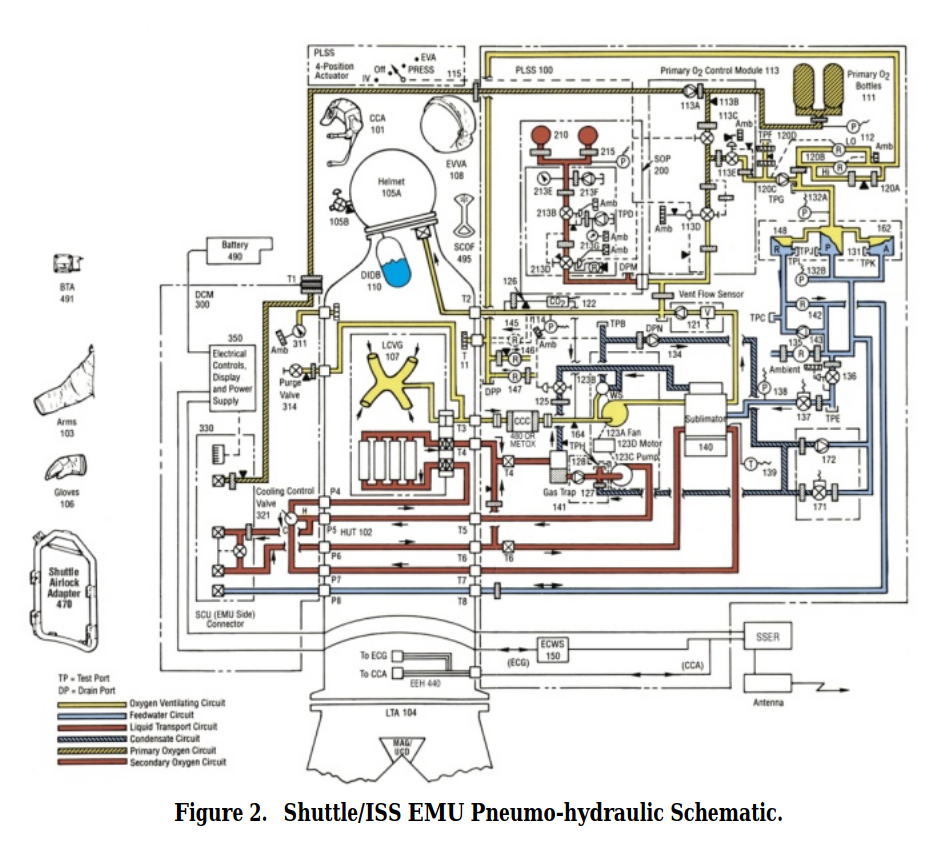 Not the answer you're looking for? Browse other questions tagged eva spacesuits or ask your own question.

36
What are these shiny wrist plates worn by astronauts in the SpaceX crew capsule
16
What's the normal leakage rate for a space suit?
14
Do space suits measure "methane" levels or other biological gases?
3
Plans for HUD in next-generation spacesuits
8
Smart suits in development
2
How will space suit computers likely be radiation hardened?

14
Could an EVA Suit meant for Mars be used for EVA on another celestial, or vice-versa?
10
Cost of an EVA on the ISS?
13
Can modern EVA spacesuit be put on/taken off by single person, without assistance?
4
Non-biological end effectors (hands) in spacesuit design
7
Who put their spacesuit boots on the wrong feet?
7
Do any spacesuit designs (including prototypes, conceptual, etc) use radiators rather than open-loop cooling?
1
Novel EVA spacesuit designs
3
How big are Extravehicular Mobility Unit (EMU) boots?
3
What was the first Soviet/Russian spacesuit to use closed-loop ventilation?