Why did the Venera missions land so close together?

I was reading about the Venera missions to Venus, and saw this map on Wikipedia: 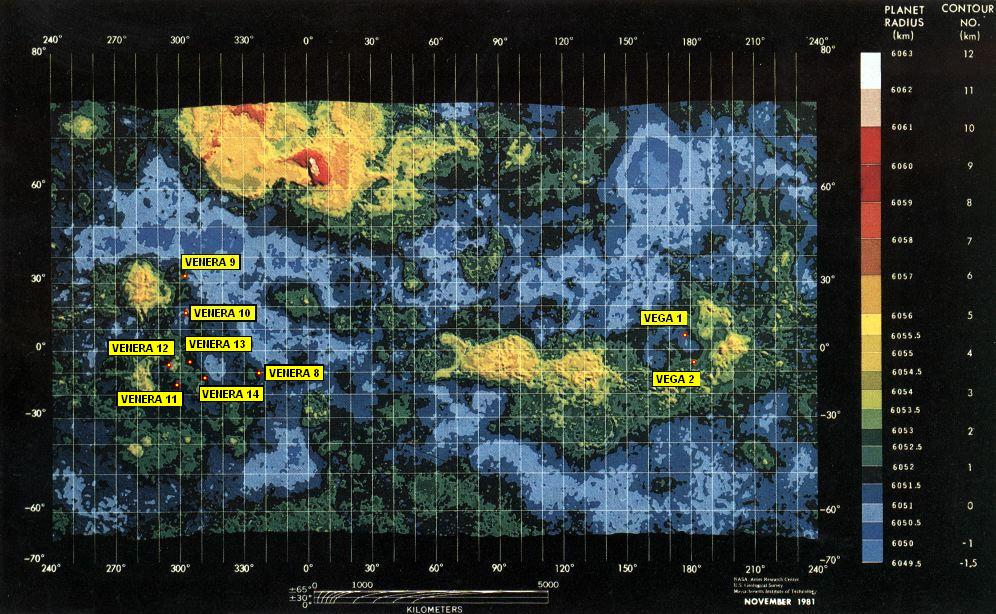 For reference, the Mars landing sites are here: 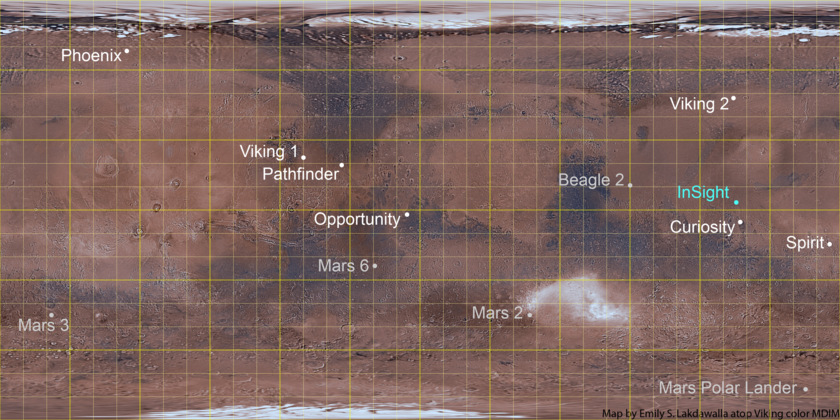 The Planetary Society - "Map of all Mars landing sites, failed and successful"

And here are the landing sites on the Moon: 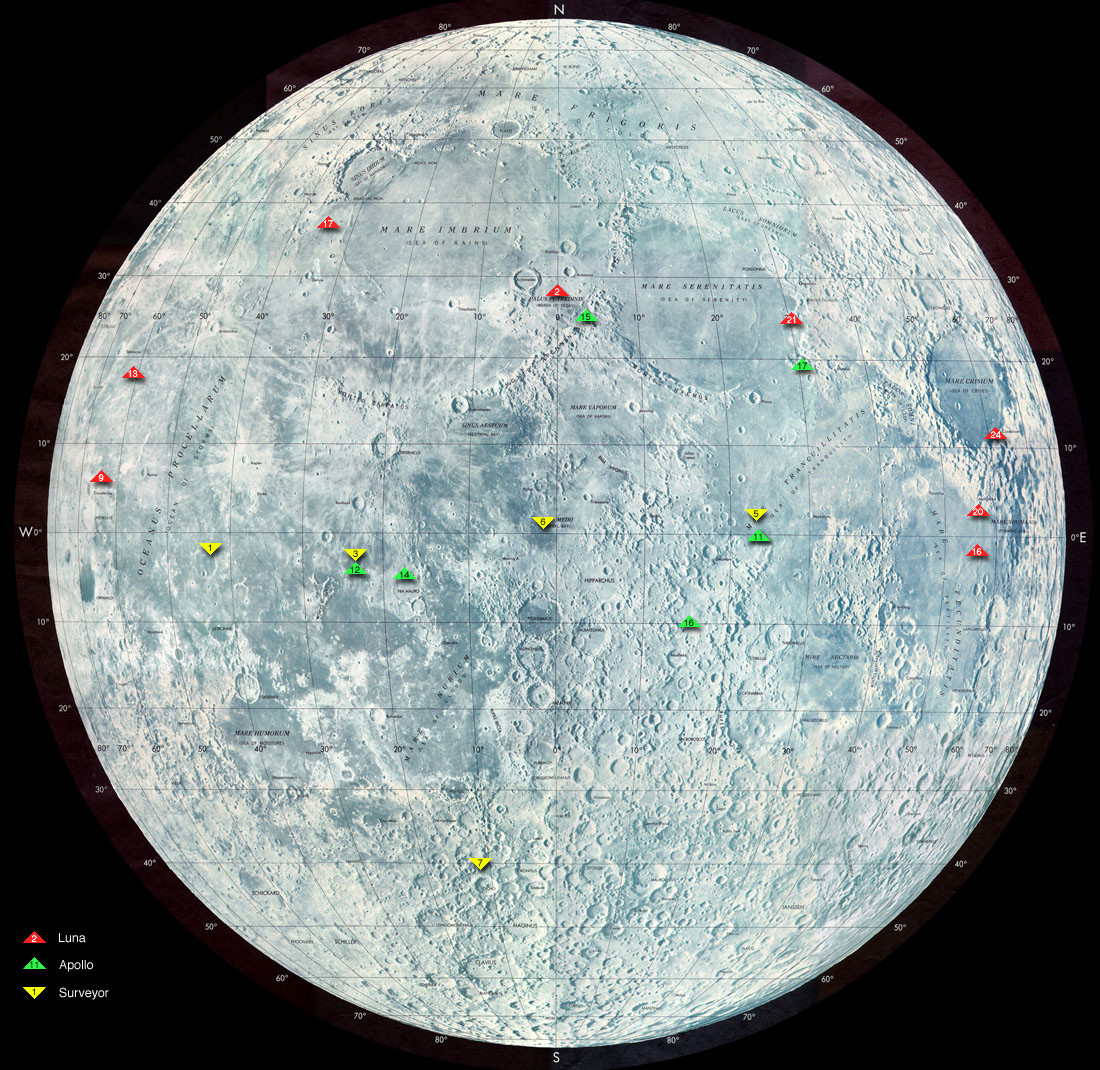 On Mars and the Moon the landing spots are very spread out across the surface, but on Venus the Venera mission landers were clumped together. What was the reason for this?

The simple answer is that taken as a whole the Venera missions didn't land particularly close together. Starting with Venera 4: 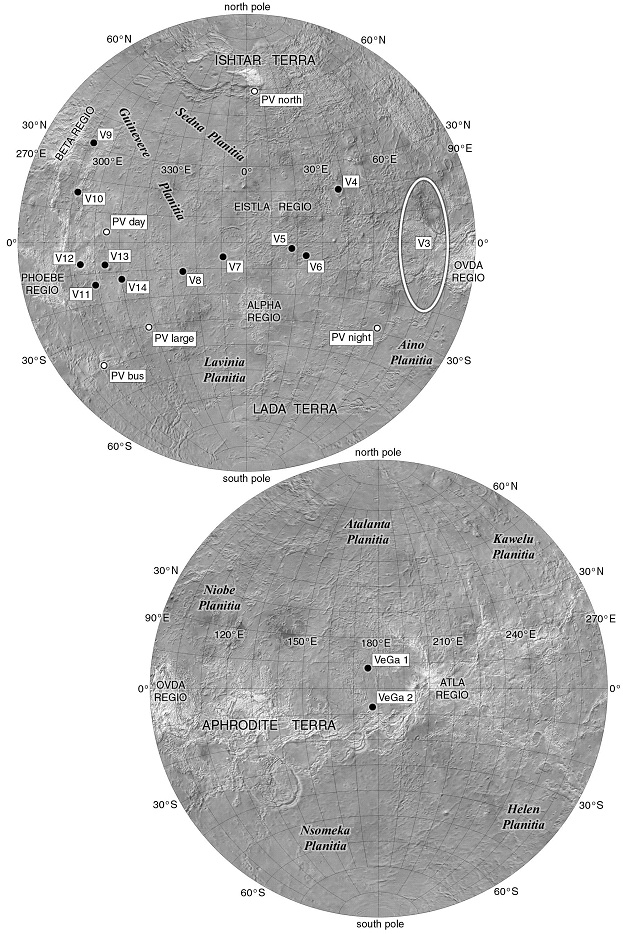 The overall spread of Venera landing sites (when you include the probes that didn't survive to the surface) is nearly 110° of longitude. For comparison, the spread of Luna landing sides on the map you provided of the moon is about 130°.

The last Venera landings did end up spread across only 60° longitude so I'll try to answer what drove the choices of individual landing sites.

To start with, the launch/landing dates of the Venera lander missions were:

Note that Venera 9-14 come in pairs - for each launch window they used the Soviets built two identical or very similar spacecraft and launched them both for redundancy (Venera 7 and 8 actually had sister ships that failed to leave Earth orbit1). When I saw the question I honestly expected to just see the landers paired off by launch window and was surprised that wasn't the whole answer (though each pair did end up fairly close together in terms of longitude).

That means that the only Venera landers that were launched when there was mapping data available were Venera 13 and 14.

In terms of general environment, Venus has an orbital period of 224.65 Earth days and a retrograde rotation slow enough that a full rotation takes 243 Earth days. That means that probes landing mere days apart have almost exactly the same landing options in terms of ballistics because the planet has barely moved relative to the orbital path of the probes.

Taken together the rotation and orbital period form a resonance with Earth: whenever Venus and Earth are at their closest approach the same side of Venus is facing Earth newscientist. That means that missions with similar constraints are likely to end up in similar places because the starting alignment of planets is the same every launch window.

Landed on the night side of the planet in line-of-sight of Earth for radio contact reasons1.

Venera 7 actually entered with its interplanetary bus still attached to keep the cooling system active as long as possible. That means that it didn't have the option of using the bus as a relay.

This was actually the first time the surface was reached with the probe intact and no mapping/imaging of the surface had been done. For that matter, this probe didn't have a camera and landed at night for optimal position with respect to radio contact with Earth 1.

Besides the temperature readings returned (pressure wasn't transmitted) the carrier signal was monitored for Doppler shifts to measure the wind during descent and rotation of the planet after landing. It seems that this is the first indication that the high wind speeds at high altitude weren't matched by the rotation speed of the planet1. Until this mission there was basically no data on the surface so there was nothing to aim for in terms of surface features.

To allow the V-72 missions to measure sunlight, they were designed to land within the illuminated crescent seen from Earth, still in radio line-of-sight.1

This was the first attempt at measuring light low in the atmosphere, but they used a photometer so only light intensity was returned, no images/mapping. That said, the light intensity readings near the morning terminator with the sun only 5° above the horizon provided the first evidence that the cloud layer had a floor and that there may be light at the surface to take pictures 1.

A major component of the mission was to take the first pictures of the surface of Venus. Not only did they land near local noon for the best possible natural lighting but they included halogen lamps (that went unused thanks to sunlight)3. The interplanetary bus of each craft was used as a communication relay to get around the line-of-sight to Earth limitations of previous landers.

Recall that Venus rotates extremely slowly so the three day separation between landings didn't mean that zenith would have moved far. On the map it's clear that these two landers ended up at different latitudes but nearly the same longitude (291.64° E vs 291.51° E).

This launch window was a poor opportunity to orbit Venus, because the vehicles would arrive with three times the kinetic energy that Venera-9 and 10 did. Instead, hyperbolic trajectories and precise timing permitted sufficiently long radio links after landing. 3

The bus had to remain in sight to act as a relay and these were the first probes to include color cameras so good lighting would have again been desirable (though due to a design flaw all 4 of the identical cameras failed to eject their lens caps)3.

I did find a reference claiming that "the targeting was based purely on ballistic considerations"4, but that seems at odds with the goal of returning pictures which drove them to land on the day side of the planet. Still, ballistic considerations would have limited their options without forcing them into a specific landing area.

This was the first mission for which there was mapping data available, though the wording of this report makes it sound like they used the mapping to better understand the areas they landed on instead of using it to plan a landing site:

From high resolution radar imaging of the landing site, Russian geologists A.M. Abdrakhimov and A.T. Bazilevskii concluded that Venera-13 probably landed on the most common type of Venusian terrain, plains with wrinkle ridges.

Radar imaging of the site reveals a younger volcanic plain with lobate flows of lava, probably formed a few million years ago. The rock, which was first considered to be solidified lava, is actually layered and crunchy (as determined by impact deceleration analysis).

That seems to be somewhat at odds with 4:

Starting with the Venera 13 mission, maps of the radar properties of Venus surface, acquired by the Pioneer Venus orbiter, became available, so within the ballistically achievable zones, areas with low surface roughness were selected and used for targeting.

On the other hand, they were using spherical entry capsules with no ability to steer during entry then parachutes in the higher altitude region of the atmosphere (where the wind speeds reach 100 m/s5) so it's possible they vaguely aimed at easy to hit (based on ballistic constraints) apparently flat regions then examined the radar maps closer for the areas where they actually landed.

Venera 4-7 were simply dropped into the atmosphere in line-of-sight of Earth for radio contact.

Venera 8 had to be in line-of-sight of Earth but also in sunlight, forcing it to land in the narrow band of Venus that met both constraints.

Venera 9/10 wanted to land with the sun directly overhead for imaging and did so because they didn't have to be in line-of-sight of Earth.

Venera 11/12 also wanted sunlight but had constraints based on the energetic transfer and geometry for using the fast-moving interplanetary bus for a relay to Earth.

Venera 13/14 were roughly targeted at flat areas based on available radar mapping data but subject to the same constraints as 11/12.

The extremely slow rotation of Venus kept mission pairs (shared constraints) within 10° longitude of each other. The resonance of planetary alignment mentioned in the environment section above drove all the landers with cameras (9-14) to land within a 20° longitude band (the same place on the planet had optimal lighting every launch window).

Not the answer you're looking for? Browse other questions tagged probe venus lander site-selection venera or ask your own question.

23
What cooling improvements did the Venera missions make?
6
Why has no lander or rover visited Hellas Planitia on Mars?
1
How would a robotic landing on an icy moon like Europa differ from landings on the Moon, Mars, Venus, Jupiter, Titan, asteroids, comets?
6
How was the radius of Venus measured so accurately (± 3 km) via radar in the mid 1960's, before Venera 4 and Mariner 5?
2
What criteria was used to select potential landing sites for Hayabusa-2's rovers on Ryugu?
7
Does exploration of Venus' atmosphere now require any planetary protection protocols?
1
How were Venera's variometers able to measure extremely weak, nano-Tesla magnetic fields?
25
What would the Venus landers look like today?
11
Is there independent evidence that China landed a robot on Mars in May 2021?
6
Premature detonation of explosive bolts when landing on hot Venus?