Have there been any recent lunar rovers?

It seems that most rover-related attention recently has been on Mars, with Curiosity recently getting there.

However, it seems there are also benefits to exploring places a little closer to home, such as the moon.

Not in the last decade, no. The Russian Luna 24 was the last unmanned lunar rover, and it was deployed in 1976.

However, there are several planned lunar rovers, such as the Chinese Chang'e 3 rover. It is scheduled for launch in December 2013 - fairly soon! 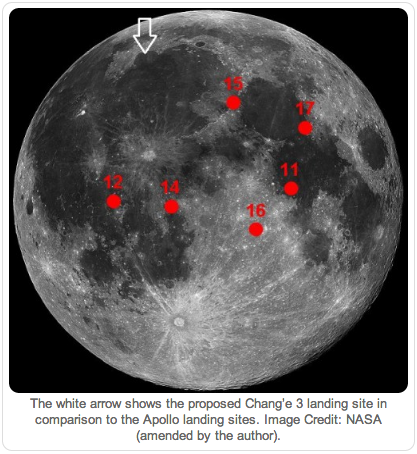 After landing, a solar-powered rover will roll off the lander and commence its mission, which is expected to last for at least three months, although presumably that will include a lot of down-time while the two-week-long lunar nights prevail.

The Changâ€™e 3 lander itself will continue to operate as a stationary science platform. It will be powered by a radioisotope thermoelectric generator and hence will be largely unaffected by the presence or absence of direct sunlight. The lander will operate a number of science instruments, including an optical telescope and a â€śsoil probeâ€ť to conduct analyses of lunar regolith.

The Changâ€™e 3 rover will have a mass of 120 kilograms, including a 20 kg science payload.

10
How will the NASA 2020 Mars rover's instrumentation differ from Curiosity?
42
What was NASA's "Hack" to improve Opportunity's memory in 2015? Did it help?
5
Are there any planned non-lunar, non-Mars rovers?
2
Have there been long-term observations of the effects of lunar exposure to equipment?
3
Has a lander/rover ever examined or photographed another mission?
4
Have any lunar probes used a cold shield?
8
What "flickering goggles" do JPL scientists rely on to explore the Martian surface "in genuine 3D"?
3
In their first 100 sols which NASA Mars rover drove the furthest and which one the least?