What is the fastest speed ever reached in space travel as measured from the point in space from which it was launched to its current/final position?

Answers.com lists the New Horizons to have the fastest rocket. Is this info still valid? 7 light hours in 11 years at 50,000 km/h?

Velocity relative to what? There's no central universal point to measure velocity at, so your answer is likely going to change based on your frame of reference.

New Horizons did indeed have the fasted launch velocity of any spacecraft that has left Earth (relative to Earth):

After three years of construction, and several delays at the launch site, New Horizons was launched on January 19, 2006, from Cape Canaveral, directly into an Earth-and-solar-escape trajectory with an Earth-relative speed of about 16.26 kilometers per second (58,536 km/h; 36,373 mph); it set the record for the highest launch speed of a human-made object from Earth.

This is equivalent to a C3 (Characteristic Energy) of approximately 164 km2/s2 (Source).

But, Voyager 1 is leaving the solar system faster (despite launching at a slower velocity), due to the dual gravity assists it recieved from both Jupiter and Saturn. As of January 2015, it was travelling at 17.027 km/s relative to the sun (Source).

So despite leaving Earth both slower than escape velocity and New Horizons, Voyager 1 maintains the record. These graphs demonstrate this: 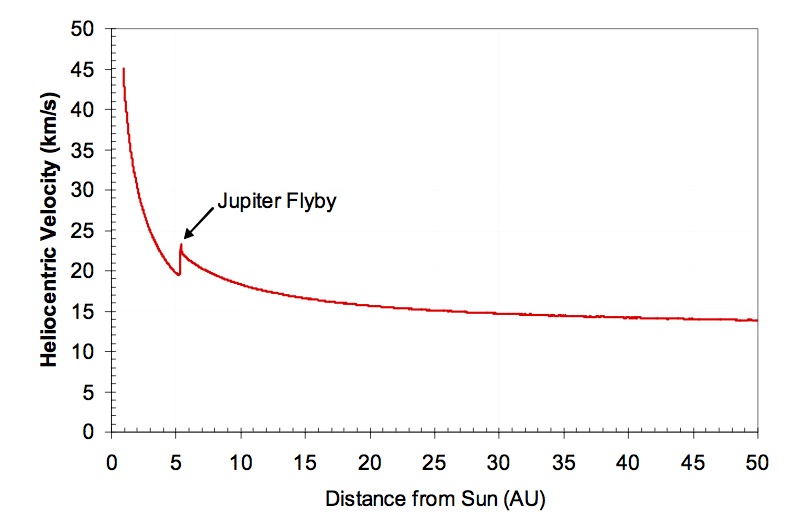 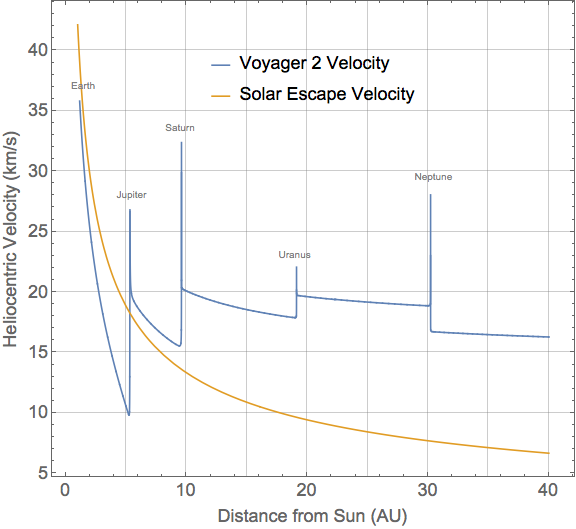 Of course, we aren't done here. The solar-studying Helios Probes, achieved a maximum velocity of 252,792km/h (70.22km/s) (Source) as they passed perihelion in their solar orbits. So do you consider this the record?

How about future missions? The title holder here is arguably Solar Probe Plus, scheduled for launch in 2018:

As the probe passes around the Sun, it will achieve a velocity of up to 200 km/s (120 mi/s) at that time making it the fastest manmade object ever, almost three times faster than the current record holder, Helios II.

The point I'm trying to make it's all relative man! I hope this answers your question.

EchoLogic's answer is great, and I like the chart of Voyager 2 because it shows escape velocity.

But there's a few different approaches (maybe I should say, points of view, from a layman like me) that can be used, for example, the Earth orbits the sun at 30 km/s (67,000 miles per hour), so any object leaving the Earth's orbit, even if it leaves the Earth ever so slowly, like let's say, it climbs a space elevator and then is given a push, just enough to escape Earth's gravity - that object is already traveling at 67,000 miles per hour compared to the Sun (and it's a good thing, if it wasn't, it would fall towards the Sun). So, 67,000 and 0 can be used for the same ship; which do you use as a starting point?

Fastest velocity relative to the Sun can be reached by ships flying towards the inner planets because the Sun's gravity adds to the ship's velocity. Messenger, which orbited Mercury had to do a few slow down maneuvers to get slow enough to orbit Mercury, or it had to slow down to about 106,000 MPH or there abouts to get into a good orbit. http://www.space.com/11147-nasa-mercury-spacecraft-surprising-facts-messenger.html

I think a better, truer but less traditional measurement of velocity would be ship velocity minus orbital velocity at that distance from the sun. Ship velocity minus escape velocity also works as a measurement of the ship's final speed as it gets far from our solar-system, but the cool thing about ship's velocity minus orbital velocity is that it tells us how fast the ship is moving relative to what it's close to. For example, for the recent Pluto fly-by, the ship was traveling far too fast to do anything other than a fly-by, but on the Messenger journey to Mercury, Messenger had to match orbital speed around Mercury, so, relative to orbital speed around the Sun, it was traveling quite slowly for a ship.

It's all in how you look at it, but I personally like velocity relative to the Sun minus orbital velocity at that distance from the Sun for solar-system travel and I like velocity minus escape velocity for travel outside the solar system, which in a practical sense, hasn't really been done yet.

Not the answer you're looking for? Browse other questions tagged spacecraft interstellar-travel pluto travel or ask your own question.

49
Why did Voyager 2 receive a gravitational slowdown (as opposed to a slingshot) at Neptune?
4
What is the fastest we could travel in space, or have ever traveled in space?
10
Are there any accurate velocity plots of all spacecraft that achieved escape velocity from the solar system? (Pioneers, Voyagers, & New Horizons)

20
At what approximate distance will the New Horizons spacecraft resolve Pluto better than the Hubble Space Telescope?
8
Can New Horizons be turned into an orbiter for the Pluto system?
5
New Horizon's disabling safe mode near flyby (in 2007)
4
Can we not get outside the Local Galactic group?
9
Compounds causing the various colors on Pluto's surface?
3
What is the largest delta-v ever produced in space from mechanically stored energy?
4
What is the fastest we could travel in space, or have ever traveled in space?
6
Was there any launch vehicle possible that could have been used for a heavier New Horizons with enough fuel to enter Pluto orbit? (adding ~10 years)