Rotating a spacecraft to create a simulated 1 g should cure most medical problems with microgravity. But can one play ball? A rotating spacecraft with several 10s or 100 meter to the center of rotation, seems to cause funny effects for items thrown "upwards" (inwards to the hub). How big are these effects and would they make for games which for once were interesting to watch? Would the players adapt quickly, or would they remain utterly frustrated? Illustration below from Theodore W. Hall 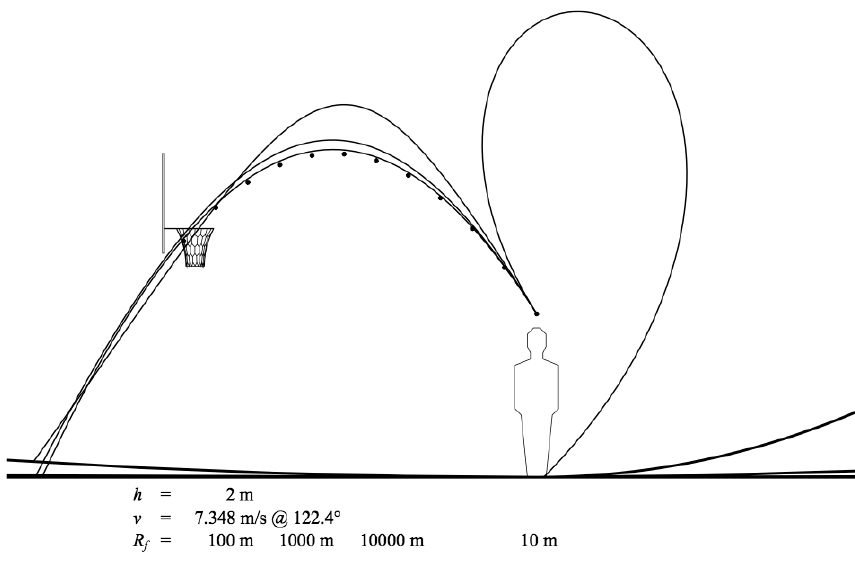 How quickly human adapts to other kinds of force fields is hard to answer, because no one has ever lived in one. For weightlessness however, we have a lot of data showing that humans quickly learn how to move around and predicting movement of objects.

Let us consider some of the interesting effects in a rotating cylinder. For a hab with a radius of 10 meters and simulated Earth gravity, walking against the direction of rotation at 1.5 m/s will make you feel about 28% lighter. In the opposite direction you will feel 32% heavier. Throwing a ball towards the direction of rotation will cause it to fall down as expected, but the harder you throw it, the faster it falls. In the other direction we have a lot of confusing behaviour. If you throw the ball gently, it would just arc and fall like normal. Throwing it harder causes the ball to fall slower, up to a point where it is not falling at all, orbiting inside the hab. After six and a half second the ball returns to you, making it possible to catch your own throw. An orbiting ball will be slowed by the air eventually falling to the floor.
Throwing the ball even harder would cause it to at first fall, then falling slower when air has slowed it down a bit, after that it would start to orbit, and finally it will fall and hit the ground.

Throwing the ball straight up would make it rise at first, then its trajectory will be bended to the side and fall down. No matter how hard you throw it, it would always miss the centre. If you instead throw it at an angle sidewards it follows the type of trajectory showed in your diagram. This makes it possible for the ball to pass the middle using a loop, or even a spiral path.

This effects are adding a great deal of unpredictability to a ball game, especially if the ball ends up slowly floating in the middle, and then returns after an unpredictable time depending on how close it was to the middle.

A somewhat related non-uniform force field environment is a rotating parabola constructed on Earth. Here it will always feel like you are on a flat floor too, with similar weird effects like your weight increasing towards the edge, and ball trajectories apparently bending to the side.

Not the answer you're looking for? Browse other questions tagged artificial-gravity reduced-gravity-sports or ask your own question.

6
With so little gravity, would swimming on Enceladus be feasible for humans?
5
Have any mammals been exposed to micogravity longer than humans?
2
static energy artificial gravity
22
Qualitative differences between gravity and a spinning habitat