How does a lander get from orbit to the ground?

I've played a lot of Kerbal Space Program and always wondered: When in orbit around a body without an atmosphere, which trajectory does a lander take to approach and land using minimum delta-v, without wasting too much time, and landing at the exact right place that has been chosen during mission planning?

If the body on which you want to land has no atmosphere, you need to reduce the spacecraft velocity using the onboard propulsion system.

If you perform an Hohmann-like manoeuvre you end up having a touch down which is not vertical and the resulting $\Delta$v is actually an underestimation of the real value. 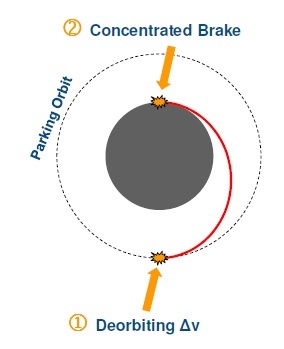 Instead, if you try to perfom a landing like the one shown in the second figure, you will have a vertical terminal trajectory but the $\Delta$v required for the break makes this manoeuvre unfeasible. 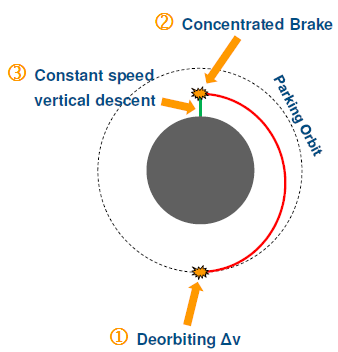 A better estimation of the actual $\Delta$v needed can be found applying an optimal control theory, which will lead to a trajectory more like the one in the third picture. 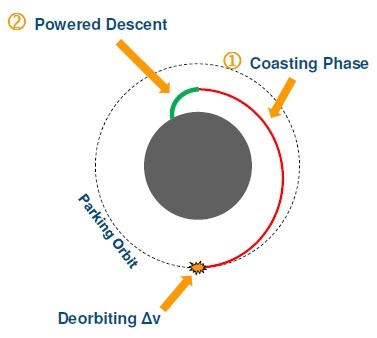 Like any optimization problem, you need to set a goal (what you want to optimize, in this case could be the amount of fuel used for the manoeuvre), then choose a model for the process and parameterize it (to have a finite number of parameters to be tuned). Finally tou have to define a cost function and some constraints. The third case I have presented represents a 2-phases landing:

For this case, you need also to make some assumptions about the panet gravity field (which is assumed to be perfectly spherical) and also you have to assume the the manoeuvre is 2D and that during the power descent the magnitude of the thrust is constant.

When you have set all these things you are ready for the numerical optimization which will give you the resulting trajectory which will minimize the amount of fuel needed.

All what I have told you was part of a lecture I had last year. The lecturer had developed all this during his master thesis and you can download it here: http://hdl.handle.net/10589/79781

The minimum $\Delta V$ is effectively a Hohmann transfer. You would de-orbit just enough to barely touch the surface at periapsis, and right at the surface you would do an instantaneous impulsive burn (also known as a "suicide burn") to exactly cancel your velocity relative to the surface. Done! A perfect landing.

In the real world however you don't have instantaneous burns. So you need to start sometime before you get to the surface and do a gravity turn to minimize the gravity loss during the finite burn. The higher your thrust-to-weight ratio, the shorter the burn and the less gravity loss that you'll have.

As for the accuracy, you want to have the landing site in the plane of the orbit. Then its just a matter of timing your de-orbit properly. The residual error can be taken out with a smidge more $\Delta V$ and some means of sensing your location relative to the intended landing point, ideally before you start your landing burn.

Not the answer you're looking for? Browse other questions tagged landing trajectory delta-v lander or ask your own question.

5
Why did Philae the comet lander bounce?
5
How much harder is it to land on the Moon away from the equator and the poles?
15
Multiple aerobraking
7
How to optimize time of ignition for an on-orbit burn and/or coast phase on ascent?
4
Does the Mars2020 lander need a new parachute design?
6
How does the delta v for leaving Earth orbit change in different directions from the Earth?
1
How does this spinach-growing Mars lander design work?
4
How much delta-v does it take to get from a Lunar Transfer Orbit to a Near Rectilinear Halo Orbit around the moon
11
What caused STS-129's low energy condition on the HAC?