I am an amateur in space, and I usually read here to better my understanding.

I was camping Saturday night (July 25, 2015), and while I was looking at the sky I noticed a bright object moving really fast (maybe it looked like a comet), I saw several of them and they were so beautiful.

Is it normal to see several fast objects moving at night? (I saw that 6 times in 2 hours. I don't know what to call them, but they had a tail.)

They were extremely fast, vanished in 1 or 2 seconds maximum. They were as bright as the other stars and planets. As for the angle, they were somehow at top of me, and went somehow straight. It was at night around 2 a.m.. What made them interesting to me is that I saw several of them, about six of them.

There is no specific direction, they appeared from different directions. I mean, if they appeared from north they would go in a straight line to south or east. They got brighter, though I noticed something in one of them--its direction wasn't straight line. It had a really small diversion. I don't know how to explain that. It covered maximum 2 seconds. They didn't reach the horizon. They covered small parts of the sky. There was no change in colors, just bright white. I did notice a dust trail for seconds after they disappeared. I was on a mountain and it was a clear sky.

I was in the Middle East, specifically Lebanon.

You most likely saw meteors. Around this time, it could be the Delta Aquarids meteor swarm. 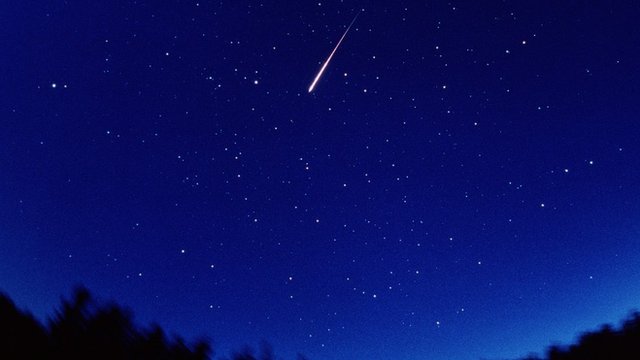 (from the BBC site)

Fast-moving objects without a tail are usually satellites.

If you saw a tail on the objects, it was very likely a meteor. The trail is caused by the object impacting with the Earth's atmosphere, and the pressure causing it to vaporize. There are several meteor shower events each year where you can see dozens of these occuring over the span of a few hours.

Oddly enough, I also went camping on Saturday. When I reached the location I spent a good 30 minutes outside and noticed many fast moving objects in the sky too. However, these objects did not have a tail on them, and were much more dim than what you report to have seen. These were almost surely satellites, which in dark skys can be picked out with little difficulty.

Not the answer you're looking for? Browse other questions tagged atmosphere observation or ask your own question.

3
What are the odds of finding a lifeless planet with breathable air?
7
Orbiting object with oscillating brightness
8
What are the known historic global and regional dust storms on Mars?
4
What would a Venus sky look like above the cloud tops night and day?
8
What are the characteristics of the Earth's atmosphere near the Karman line and why?
2
What are the ranges a human can survive AND breathe in?
0
What could the fast moving item I just saw on July 27, 2018 have been?
2
What are the temperature and pressure inside the CO$_2$ deposit on Mars?
4
What are InSight's barometric and seismic digitization rates and frequency responses when it "listens to the wind"?