Did New Horizons capture enough of Pluto's surface to create its global map?

Given the short amount of time that New Horizons focused on Pluto, did it capture enough of its surface to create a global map of it?

If you mean if New Horizons' data return could produce a global high-resolution map of Pluto's surface, then no, and here's why: 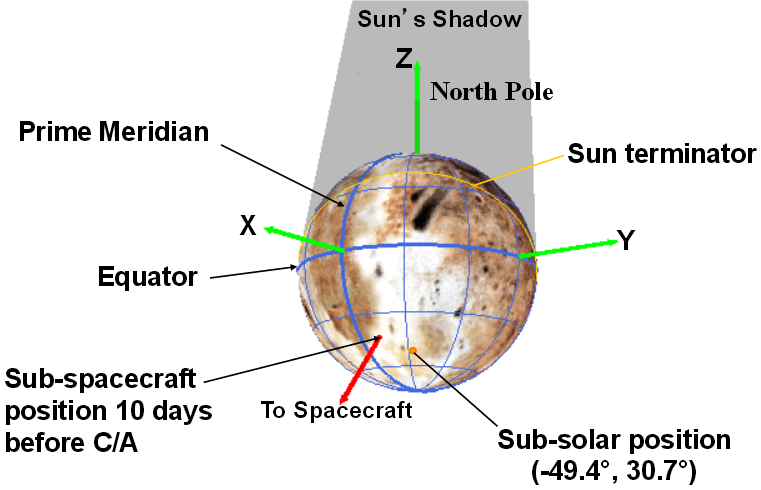 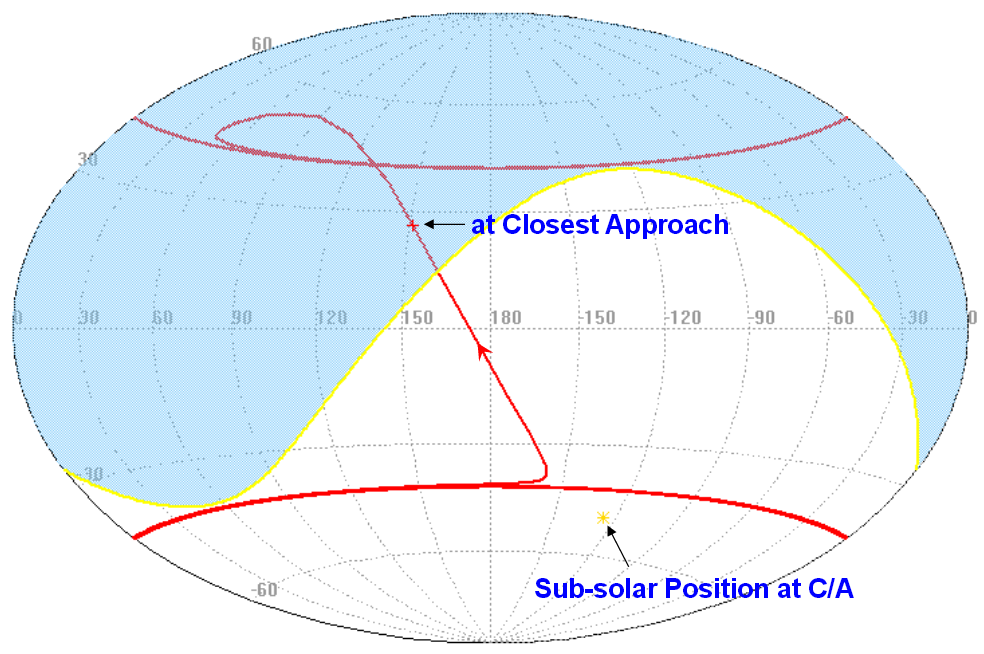 The Whale and the Donut: 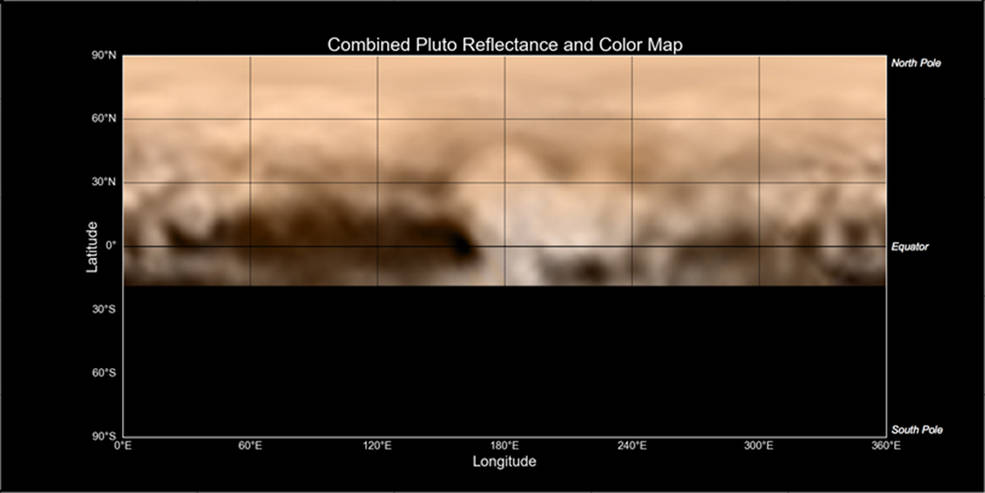 This map of Pluto, created from images taken from June 27-July 3, 2015, by the Long Range Reconnaissance Imager (LORRI) on New Horizons, was combined with lower-resolution color data from the spacecraft's Ralph instrument. The center of the map corresponds to the side of Pluto that will be seen close-up during New Horizons' July 14 flyby.

This map gives mission scientists an important tool to decipher the complex and intriguing pattern of bright and dark markings on Pluto's surface. Features from all sides of Pluto can now be seen at a glance and from a consistent perspective, making it much easier to compare their shapes and sizes.

The elongated dark area informally known as "the whale," along the equator on the left side of the map, is one of the darkest regions visible to New Horizons. It measures some 1,860 miles (3,000 kilometers) in length. Directly to the right of the whale’s "snout" is the brightest region visible on the planet, which is roughly 990 miles (1,600 kilometers) across. This may be a region where relatively fresh deposits of frost—perhaps including frozen methane, nitrogen and/or carbon monoxide—form a bright coating.

Since the flyby, Pluto is showing New Horizons its dark side, with only a thin sliver, or a crescent, illuminated by the Sun and showing its atmosphere, and the rest of it is in the shadow. Which is bad for high resolution mapping, but also good for a number of science experiments the probe will do now, including e.g. occultation radio science measurements of Pluto's atmosphere, science requiring long exposure without bright background burn-out, and so on. But it got a good deal of Pluto's surface topography with its instruments, too. For a single flyby, a pretty good return, and expect many more high-resolution images focused on smaller areas, showing a lot more detail than this global map, as it transmits the rest of its flyby data in the following year and a half or so.

You can view the partial global map of Pluto also in Google Earth, if you follow instructions here.

Global Map of Pluto (with grid): 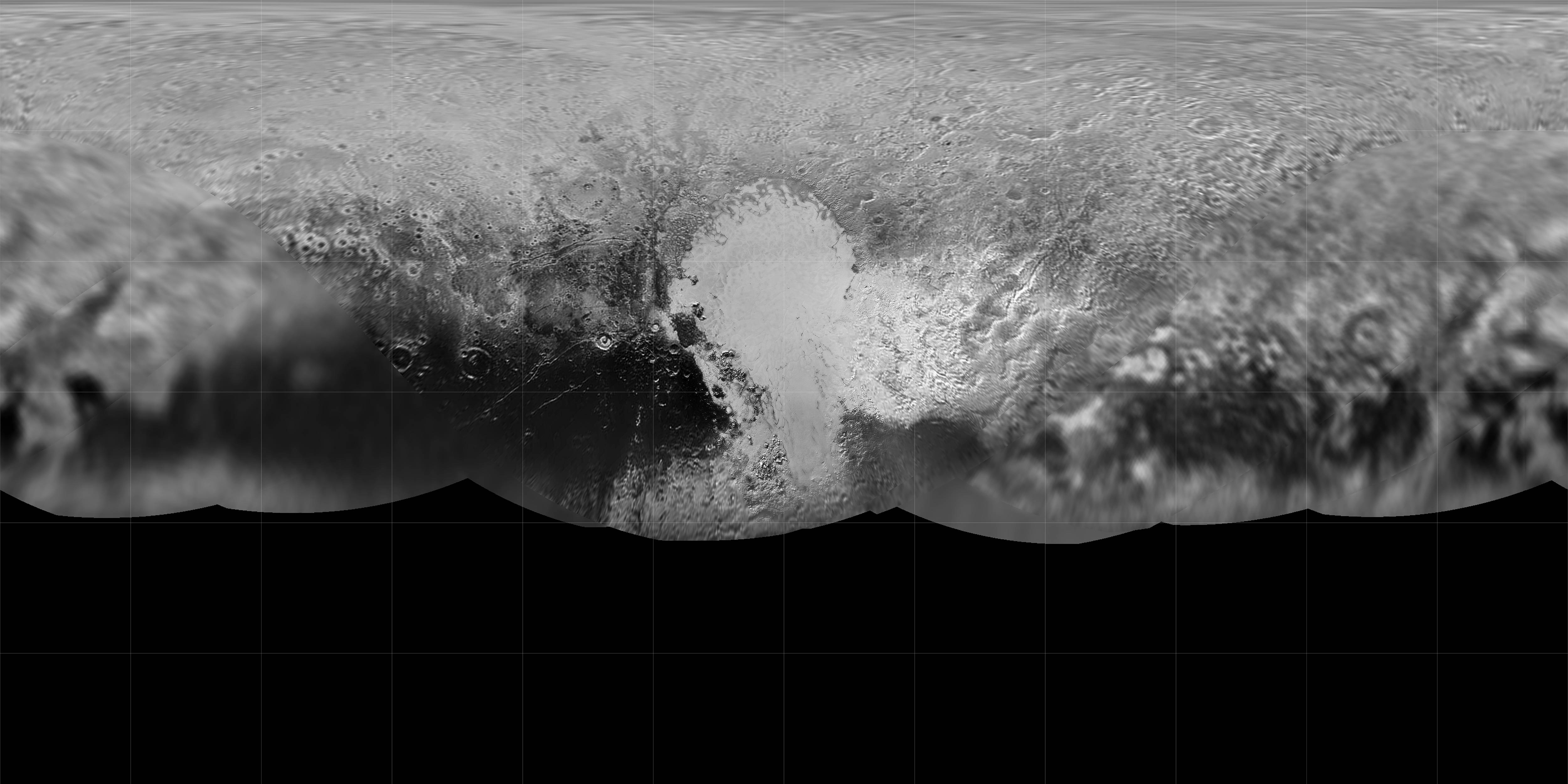 The science team of NASA’s New Horizons mission has produced an updated global map of the dwarf planet Pluto. The map includes all resolved images of the surface acquired between July 7-14, 2015, at pixel resolutions ranging from 40 kilometers (24 miles) on the Charon-facing hemisphere (left and right sides of the map) to 400 meters (1,250 feet) on the anti-Charon facing hemisphere (map center). Many additional images are expected in fall of 2015 and these will be used to complete the global map.

Grid here is apparently drawn at every 30°, but isn't labeled. Also obvious is that the map was created with early failsafe New horizons science return using many highly compressed JPeG images, so this will get better over time as complete datasets are transmitted.

Commentary: There's an obvious confusion over North and South hemispheres between released The Whale and the Donut map of Pluto and Alan Stern's presentation. I'm not exactly sure who's in error here, but something got mislabeled. Clarification by APL would be appreciated, but the point stands, we won't get a complete high resolution map of Pluto with this single flyby, despite APL release descriptions being somewhat ambiguous about that. And with all the raw data they're preparing for release on short notice, often requiring a lot of processing, such errors will happen, but should be corrected with higher level releases later on.

Not the answer you're looking for? Browse other questions tagged probe new-horizons pluto imaging mapping or ask your own question.

4
Latitude and longitude lines for Pluto and Charon