What was the procedure to stop the descent engine on the Apollo 11 LEM?

What was the correct procedure to stop the descent engine on the Apollo 11 LEM?

When the LEM had a contact light on Apollo 11, there was some terminology spoken that I'm assuming is important (and which I find quite interesting regardless).

However, what of this was actually required to stop the engine? As an aside, I think it is highly relevant to ask for a clarification for the following terminology without making a separate question for each phrase. In particular the meaning of:

"ENGINE STOP": Does this actually stop the engine, or is it simply a part of the steps that must be taken? If not, then what is the meaning of the other phrases spoken?

"ACA -- out of detent": What is this? A mechanical fuel pump that is stopped? What is ACA? Attitude Control Assembly (https://www.hq.nasa.gov/alsj/apollo.glossary.html)?

"MODE CONTROL—both AUTO": I don't know what this is.

"DESCENT ENGINE COMMAND OVERRIDE—OFF": I'm assuming this is to prevent the abort stage from firing automatically.

As the LEM descent engine uses hypergolic fuel with a pintle injector, it doesn't seem like a mechanical pump is required.

The annotated transcripts are great for this stuff. Also O'Brien's AGC book. 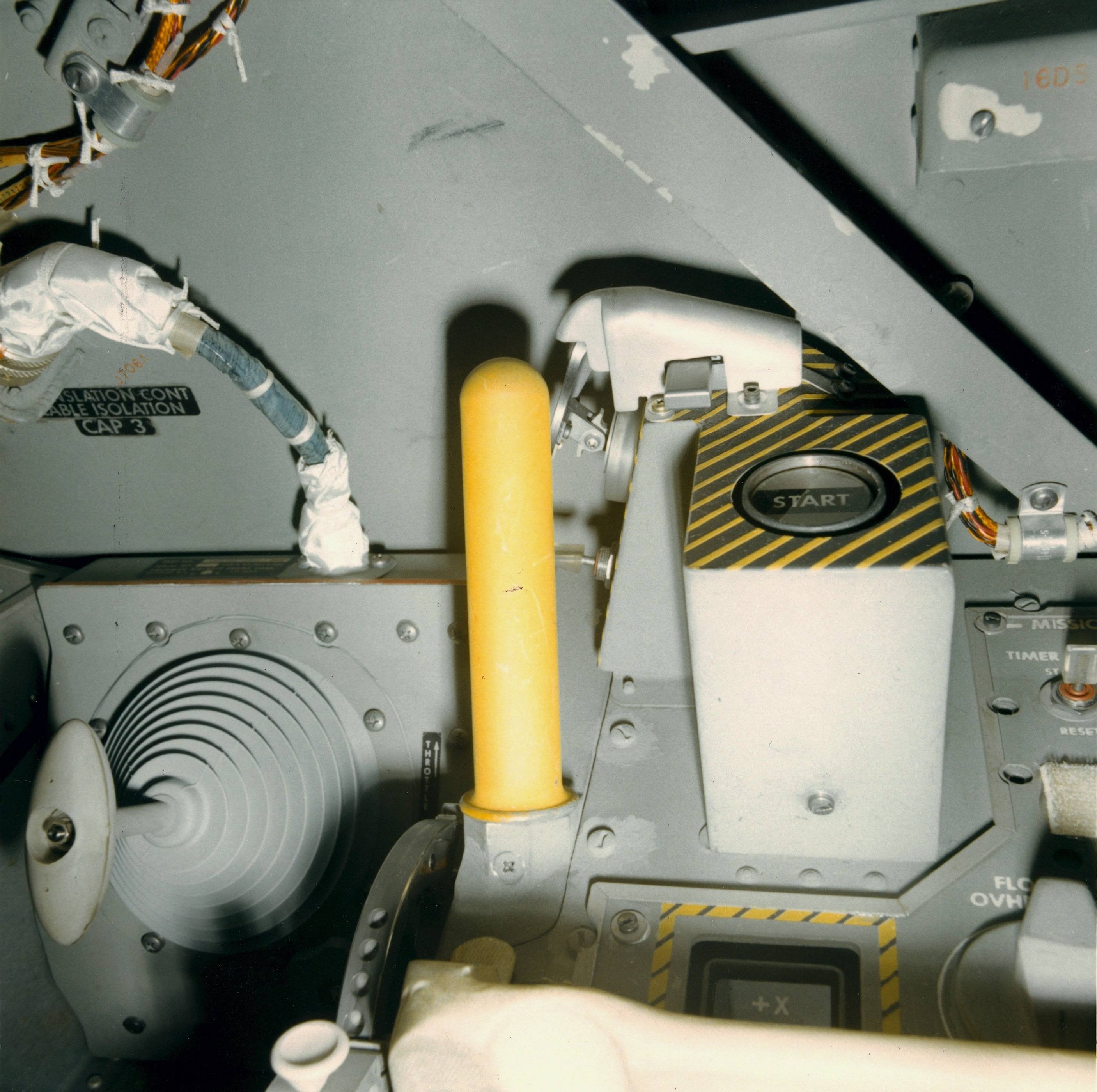 Once the contact light came on (about 1.6m above the surface), the commander would hit the button, the engine would stop, and landing would be inevitable. Everything else after that is safing/stabilizing.

ACA out of detent: The control system was in "attitude hold" mode; as long as the commander wasn't actively trying to rotate the ship, the system would try to maintain the same orientation. At touchdown, the attitude control thrusters would be trying to hold the last commanded attitude. By barely moving the control, the system is instructed that the current attitude is the desired attitude, stopping the RCS rockets from firing.

Mode control both auto: I assume this is related to the guidance mode control -- automatic landing (LM commander designates a landing spot and the LM computer does the rest) versus attitude hold (LM computer holds the LM's orientation stable and the commander does the rest). I imagine you'd want it back in automatic mode in case you needed to do an emergency ascent. Not sure what "both" refers to; best guess would be that the PGNS (primary guidance) and AGS (abort guidance) each had mode controls.

Command Override is a shorthand for 'Descent Engine Command Override', which will allow either pilot to assume control of the descent engine's thrust using the Thrust/Translational Hand Controllers, if required.

Engine arm off: I think this is just a master switch for the descent engine, independent of the throttle. In the transcript, Aldrin arms the descent engine at 102:32:34, but ignition occurs some 30 seconds later.

Not the answer you're looking for? Browse other questions tagged engine-design terminology lunar-landing apollo-11 or ask your own question.

43
How did NASA choose who descended in the LEM during the Apollo missions?
8
How different was the Apollo LM descent trajectory from the most fuel-efficient?
0
What do you call the Apollo LEM plus CM (Command Module) when they are connected?
6
Looking for Apollo 11 powered descent video
27
What were the problems on the Apollo 11 lunar module?
16
Are there photos of the Apollo LM showing disturbed lunar soil resulting from descent engine exhaust?
12
Viking Lander descent engine design feature
8
What was the nature of the communication problems during Apollo 11's Eagle's descent? How were other antennas selected?