Why did Voyager 2's velocity drop far below escape velocity before the first gravity assist?

Looking at the graph below, it appears that Voyager 2 started at just over escape velocity of the solar system. Just before the Jupiter flyby, it was travelling much slower than escape velocity. Presumably, travelling to Jupiter the only thing that would have changed the probe's velocity is the Sun's gravity. As the probe went further away from the Sun, you would expect it to slow down, but why would it drop below escape velocity if it started above it?

You are correct that Voyager did not change from above escape velocity to below escape velocity shortly after launch. The plot is misleading in that it is just not very accurate right there at 1 AU. The plot lines are kind of thick and a smidge off.

Now that I look at it more closely, the escape velocity line in that plot is wrong in other places as well.

Here is a better plot:

The image (original at Wikimedia Commons) is only an approximation, as evidenced by the noticeable change in shape of the solar system escape velocity line at 14AU. The line is only defined with three points, and my guess would be that the creator of the graph tried to shape the curve manually.

According to Wikipedia the solar system escape velocity at the earth's orbit (1 AU) is 42.1km/s, considerably more than the ~35.5km/s of this graph. The graph's author notes that it is based on this image, which despite being from NASA, seems to share the same inaccuracies.

According to another Wikipedia page:

The only objects to date to be launched directly into a solar escape trajectory were the New Horizons spacecraft, its third stage and its two small de-spin masses.

At first glance, both orbital velocity and escape velocity are proportional to $\sqrt {\frac1{distance to the sun}}$, so I expected the curves to run parallel, with an offset for the launch velocity of the probe, plus further offsets for each gravity assist. Mark's answer shows it's more complicated than this.

For a spherically symmetric massive body such as a (non-rotating) star or planet, the escape velocity at a given distance is calculated by the formula:

Plugging this into Excel gets me this graph for escape velocity vs. distance: 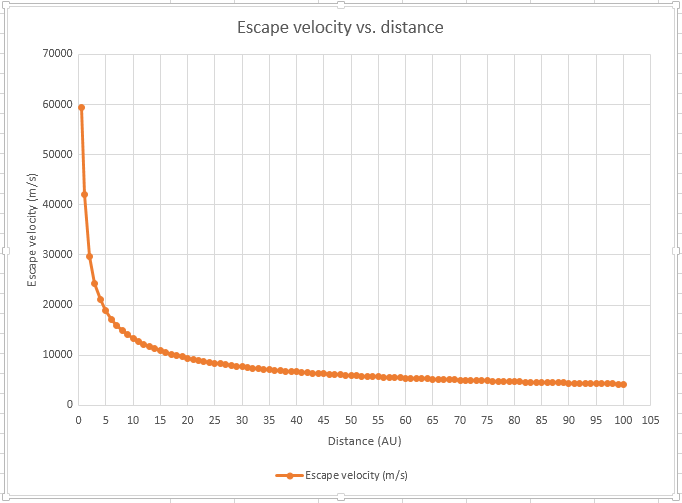 I'm still working on orbital velocity data, to be continued.

voyager's speed dropped below escape velocity b/c its escape path was convoluted. It was a planetary flyby mission, necessitating extra delta V (and gravity assists) so that voyager could 'weave' its way out, rather than a straight escape path.

Not the answer you're looking for? Browse other questions tagged gravity voyager delta-v escape-velocity or ask your own question.

3
Isn't the escape velocity for the solar system at the Earth 42.1 km/s? Then why does the graph show 36 km/s for the same value? Is the plot wrong?
72
When will New Horizons overtake Voyager 1 in distance from the Sun?
16
Why didn't Voyager 1 and Voyager 2 crash on into Jupiter or Uranus when they approached near to these massive planets?
20
Why not send Voyager 3 and 4 following up the paths taken by Voyager 1 and 2 to re-transmit signals of later as they fly away from Earth?
15
What is the most fuel efficient way out of the Solar System?
11
Why is Voyager/Pioneer so slow compared to Parker Solar Probe?
11
Where is Voyager 1 now (2021)?
4
How much does a swing-by change the orbit of the planet?
9
Are there any accurate velocity plots of all spacecraft that achieved escape velocity from the solar system? (Pioneers, Voyagers, & New Horizons)

49
Why did Voyager 2 receive a gravitational slowdown (as opposed to a slingshot) at Neptune?
15
What is the most fuel efficient way out of the Solar System?
10
what happens to particles that escape the atmosphere on planets in the solar system?
16
Non-orbital takeoff and landing?
19
Why does Voyager 1 lose speed after the sudden gain in speed from gravity assist?
23
Do you need 0 km/s velocity to crash into the sun?
3
What's the escape velocity at the near/far end of Phobos considering tidal forces?