The L-2 point of the Sun-Earth system is away from the Earth on the night-side of the Earth; i.e. it's always local midnight at the sub-satellite point. This is an attractive property for some spacecraft. 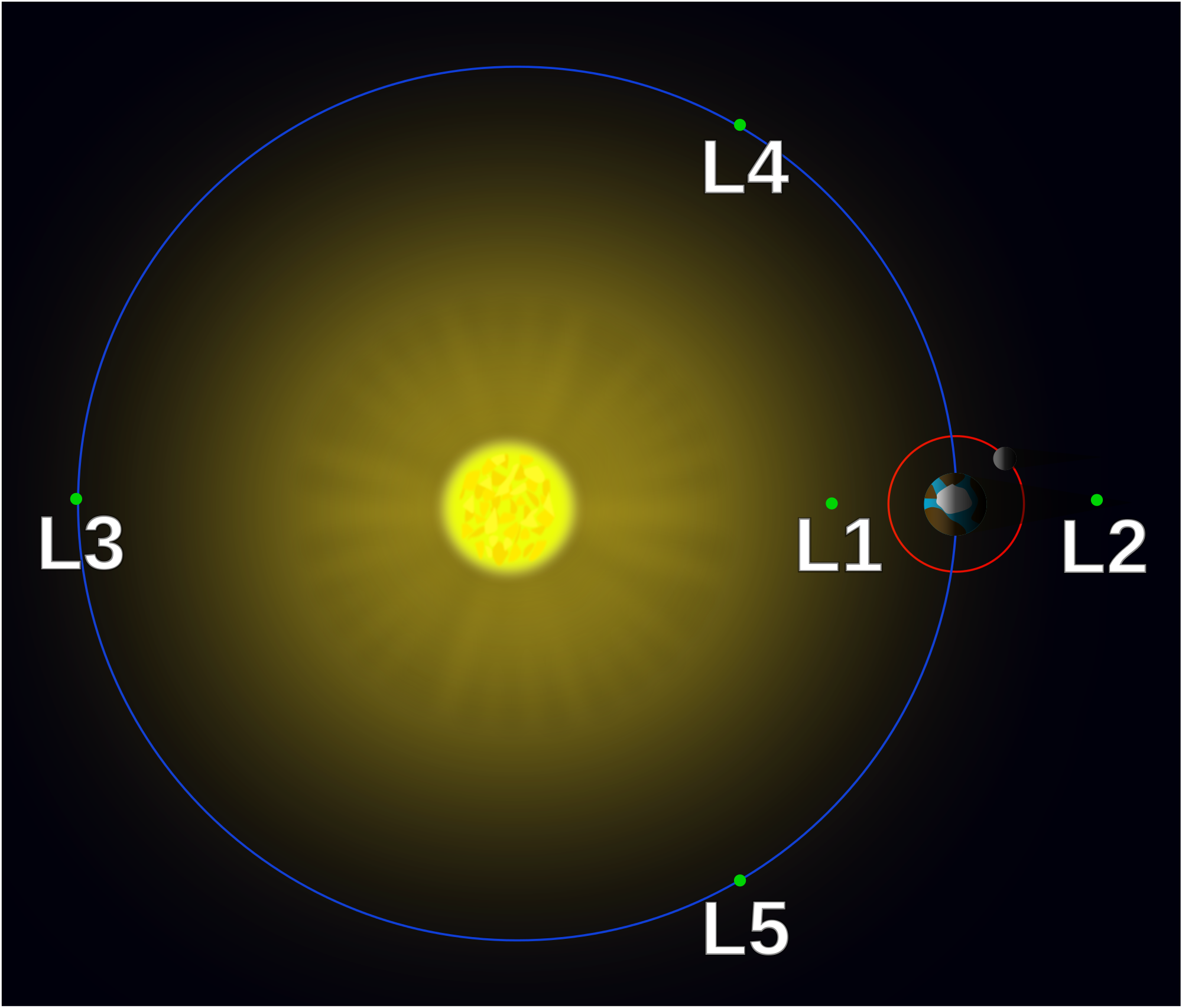 Illustration from Wikimedia Commons. Not to scale.

Fortunately for solar-powered spacecraft, the Sun is still visible, or those satellites couldn't be solar powered. But the disk of the Earth must be a sizeable fraction of the disk of the Sun (this should affect energy budgets too...). What does the Sun-Earth-Moon system look like from the Earth-Sun L-2 point? It should be extra interesting when Earth-based observers see a lunar eclipse. Have there been any photos of Earth taken from this point?

I treated this as a problem of geometry and came up with this: 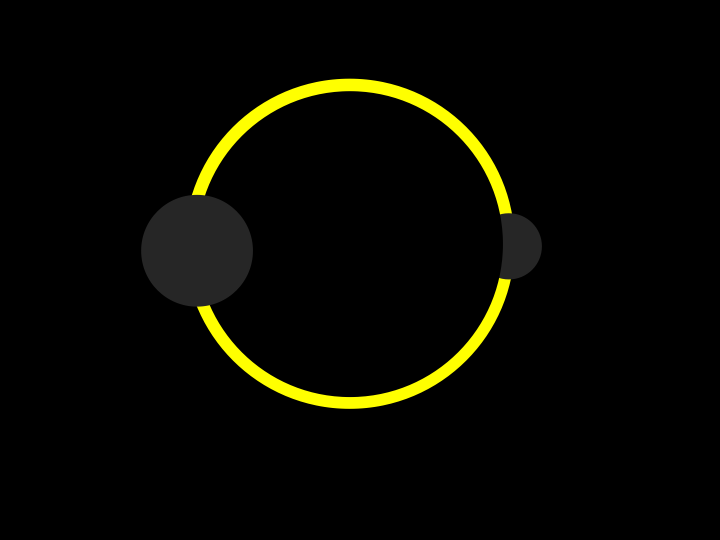 My numbers look a little different to @PearsonArtPhoto's, so here they are:

From these I calculated:

Notes - my terminology may be inaccurate. Here are some clarifications:

I just saw this from NASA today. While this is taken from L1, and this question is about L2, these two Lagrange points are similar distances from the Earth (in opposite directions), so we can see that the proportions, at least of the Earth and moon, are more or less correct in my simulation.

Earth from L2 in photo (similar distance to L1, obviously lit differently though)

The spacecraft that orbit at L2 usually don't just stay at the L2 point, but do what's called a Halo Orbit, or related Lissajous Orbit. Essentially they orbit the L2 point, instead of right at it. As a result, they actually see the Earth and Moon as distinct from the Sun. And they usually orbit the point in such a way that they will not have a direct line from Earth to Sun, which makes communication much easier (The Sun produces a significant amount of RF noise)

As for the view, if at the exact L2 point, the Earth would show up as a disc about 0.48 degrees, and would thus actually be in partial eclipse perpetually, as the sun is a disc about 0.53 degrees from the L2 point. Thus, most (~82%) of the Sun would be covered all of the time by the Earth, with slightly more if the Moon was also covering the Sun. The atmosphere of Earth would also cover some, perhaps another few percent. This would be a significant annular eclipse. A typical annular eclipse on Earth of the Moon is over 90%.

A reasonably accurate1 rendering can be made with Celestia. Here we are at 1,500,000 km from Earth's center, on August 26, 2018 (the next full moon as I write this), at approximately the Earth-Sun L2 point. 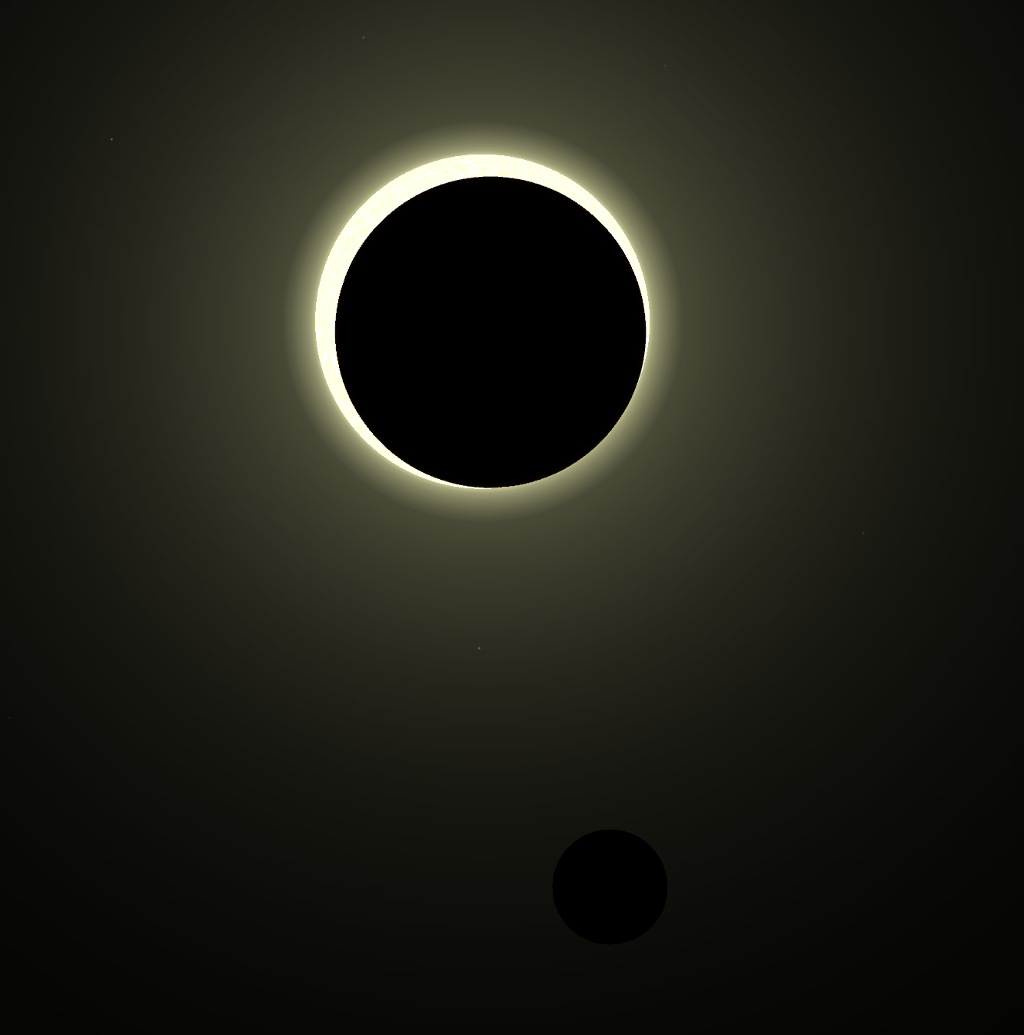 Earth mostly but not completely eclipses the Sun's disk. The Earth and Moon appear as completely black disks in comparison to the Sun's intensity.

Because it's a full moon, the Moon is closer to us than Earth in this image. It's barely visible as a small black disk near the bottom of the image.

Going forward a few weeks to Sep 9 we get to the new moon: 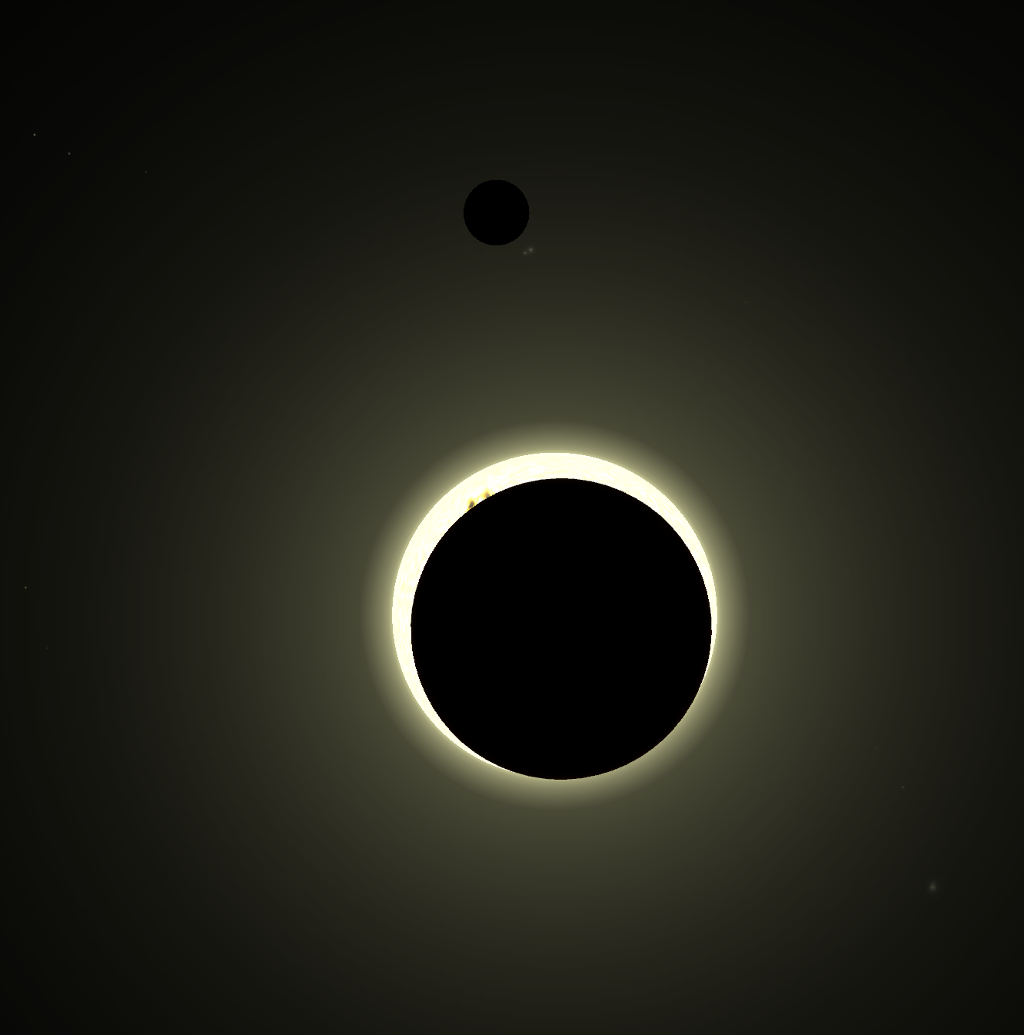 The Moon looks a little smaller due to the increased distance. We also see a few sunspots.

In Celestia, a lunar eclipse from this perspective doesn't look like anything, as the Moon is just a black disk atop another black disk. I suspect this is accurate: the illumination on the Moon is very faint relative to the Sun's disk which is directly visible, and besides at the L2 point we are on the wrong side of the Moon to observe even that.

Here's first quarter, Aug 16, 2018. I've enabled artificial ambient light so the dark side of the Moon is illuminated: otherwise it wouldn't be visible in this perspective. Earth is on the right, the Moon on the left. The brightest star near the middle is Regulus, and the fuzzy spot just above it is Leo I. 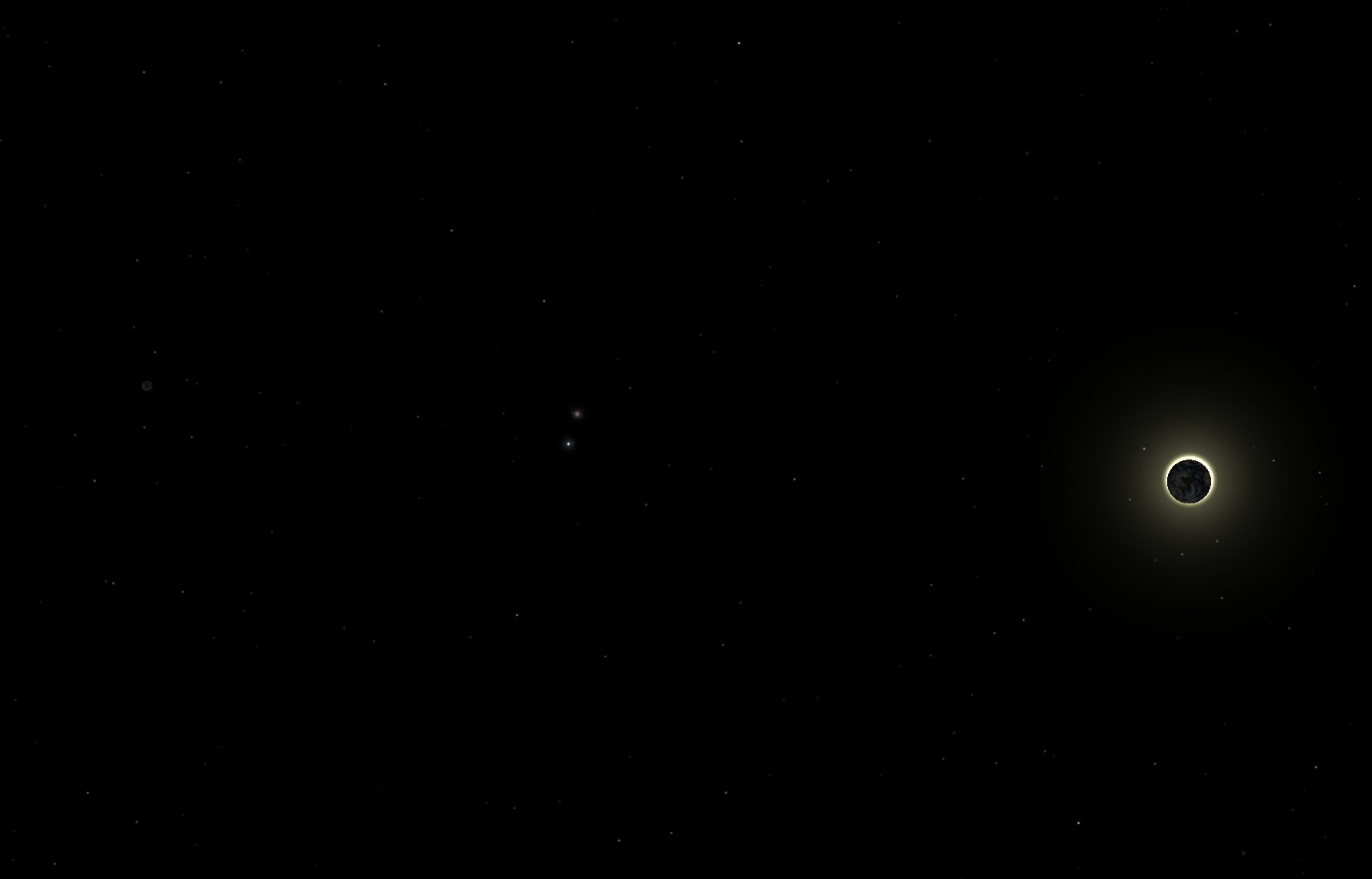 Zooming in on the Moon and disabling the artificial ambient light reveals a tiny crescent, with IC 613 at the top of the frame. This is as "full" as the Moon ever gets from this perspective. 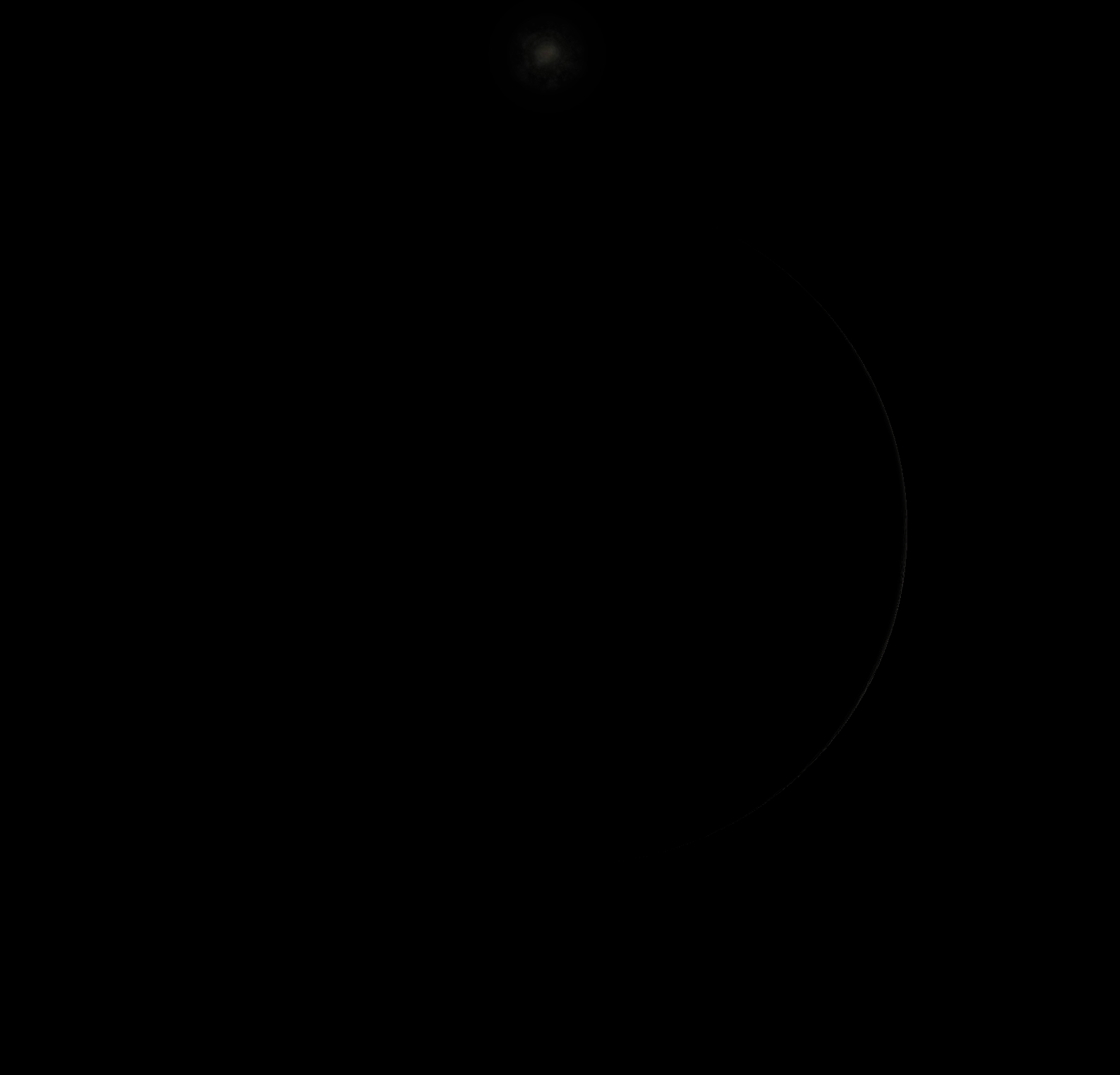 I believe the Moon should be slightly illuminated indirectly by light reflected from Earth in this view. There's some talk of planetshine being implemented in 2008 in Celestia, but apparently it was either never committed or isn't working.

1 Celestia is very accurate with regard to geometry, but has its limitations. In some of these images we see stars and possibly deep space objects, the sun's disk, and sunspots at the same time. I'm doubtful any real imaging instrument would have sufficient dynamic range to generate such an image without compositing.

Not the answer you're looking for? Browse other questions tagged orbit lagrangian-points earth or ask your own question.

18
Are there any (Lagrange) points in the Solar System in perpetual shade?
13
Have there been any photos taken of a total Earth-Sun eclipse from the Moon, or its vicinity?

19
How deep is the force well of L4 and L5 Lagrangian Points of Earth-Sun set?
9
What is the diameter of magnetopause 1.5 millions kilometers behind the Earth?
12
Low Energy Transfer within Earth-Moon system
1
from L1 to L2 (earth-sun system) using gravity assistance with the moon
15
Is this what station keeping maneuvers look like, or just glitches in data? (SOHO via Horizons)
1
Why has the Earth-Sun libration point L1 been chosen over L2 for NEOCam to detect new NEOs?
2
Is communication from a spacecraft in SEL1 disturbed by the Sun?
1
L2 point in multi-moon system
18
If the Earth spun clockwise, how would that affect Space Exploration?
1
Does the Earth's orbiting the Sun influence spacecraft in Earth's orbit?