What, if any, libration points exist in systems of multiple orbiting bodies?

Jovian system must have its periodic or quasi-periodic libration points. Would two or more of its Galilean moons in orbital resonance with Jupiter play a role despite their low masses relative to the primary, or is an orbiting system of 3 bodies of significant mass required for such libration points to remain stable? How does such a system's effective potential change and could any of these libration points be periodic?

In a system with libration points, none of the bodies move relative to the point. Therefore, the Earth/Moon points are not valid 4-body solutions, because they move relative to the Sun. For true 4-body or higher n-body systems that are not simply coupled 3-body systems, we have to look at Klemperer rosettes and similar arrangements. If the barycentre in the middle is not occupied, this would be a libration point. If we use a rotating frame of reference, we can model inertia as a fictitious force acting away from the middle. If an object occupies the barycentre, an equivalent of the L1 point will exist between the centre and one of the objects in the orbiting polygon. That is not a stable point, and the many other possible points are not stable either. As the inertial force of an object stationary in a rotating frame of reference grows linear with distance, and the gravitational influence from the object with the inverse square law, a equilibrium where this forces cancel out exist on every axis of symmetry of the system. 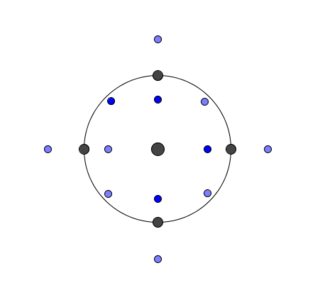 Not the answer you're looking for? Browse other questions tagged orbital-mechanics n-body-problem lagrangian-points or ask your own question.

19
How deep is the force well of L4 and L5 Lagrangian Points of Earth-Sun set?
5
Do Lagrange-like regions temporarily appear around planets with multiple moons?
4
Is Dawn's upcoming low periapsis orbit for XMO7 "resonant"?
7
Do Lagrangian points apply to eccentric orbits or binary systems?
3
Are there some three-body orbits that can't be escaped? Can we know without propagating forever?
4
Can mascons have Lagrange-like points? In principle? At the Moon?