How do astronauts sleep in zero G?

Perhaps this is a strange question but I've always wondered how astronauts, particularly those aboard the ISS, sleep in zero G.

Do they just hang out in "space" or do they have beds they strap themselves into? I'd imagine if you were free floating whilst asleep you might bump into something, but maybe not?

Astronaut Susan Helms slept in the huge Destiny Laboratory Module by herself while she was living aboard the International Space Station. This is on the opposite side of the station from the Service Module where her crewmates slept. …

That is the basics of how the crew sleep. Here is a more detailed discussion of where they sleep as well as more details on the cabins etc.

@geoffc This info is pre-ISS full build. Node 2 has 4 sleeping quarters, and there are 3 sleeping berths in the Russian side.

… The station provides crew quarters for each member of the expedition's crew, with two 'sleep stations' in the Zvezda and four more installed in Harmony. The American quarters are private, approximately person-sized soundproof booths. The Russian crew quarters include a small window, but do not provide the same amount of ventilation or block the same amount of noise as their American counterparts. A crewmember can sleep in a crew quarter in a tethered sleeping bag, listen to music, use a laptop, and store personal items in a large drawer or in nets attached to the module's walls. The module also provides a reading lamp, a shelf and a desktop. Visiting crews have no allocated sleep module, and attach a sleeping bag to an available space on a wall — it is possible to sleep floating freely through the station, but this is generally avoided because of the possibility of bumping into sensitive equipment. It is important that crew accommodations be well ventilated; otherwise, astronauts can wake up oxygen-deprived and gasping for air, because a bubble of their own exhaled carbon dioxide has formed around their heads. 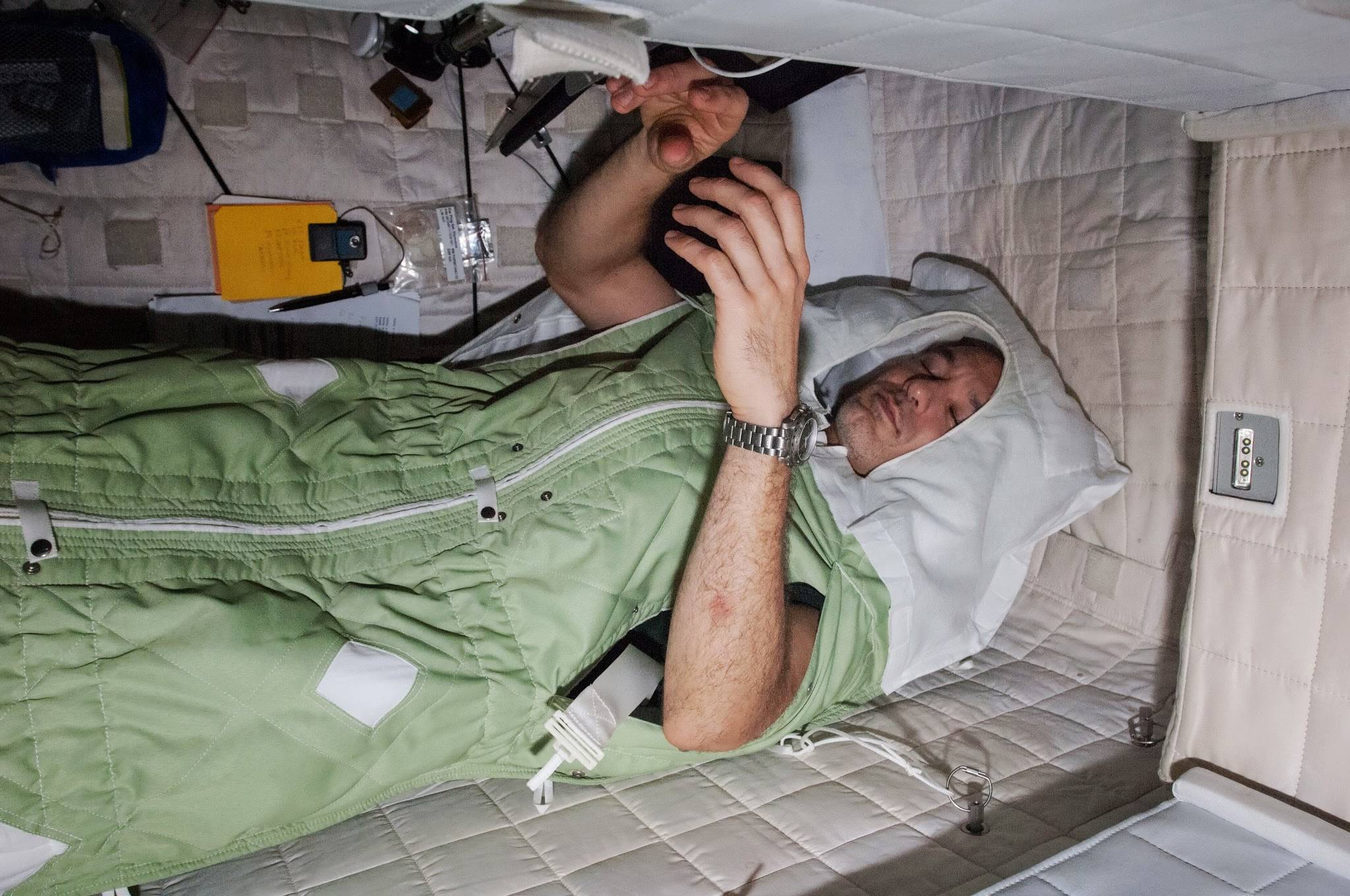 You would want to watch Suni Williams' tour of the station videos:

It's the easiest to understand it. But in essence, they have sleeping stations like for example in the Node 2 (Harmony) module shown in video, with sleeping bags inside. If the video gets a bit confusing where some direction is, note that there's labels with orientations around the bulkhead behind Suni (OVHD for overhead, PORT,...).

You might wonder where the need to have those sleeping bags tied down comes from, if they're sleeping in microgravity. It's essentially to prevent them from unwittingly pushing themselves around during sleep, but there are slight external forces acting on them too, mainly air ventilation system preventing pockets of carbon dioxide, and slight gravity gradient that still exists in orbit and where the term microgravity comes from, describing its amplitude relative to 1 g. The bags are needed because the temperature at the station is kept slightly on the cold side of things if you're used to warmer climates (currently 23.20 °C in the Destiny module but the crew is up now with three out of six doing exercises) for various reasons, including the air itself serving as a coolant for various equipment, for hygienic reasons to prevent body odor, sweating, slow down growth of fungi and yeasts,... and due to air ventilation. And the doors are of course there to ensure some privacy.

Not the answer you're looking for? Browse other questions tagged iss microgravity astronauts astronaut-lifestyle sleep or ask your own question.

5
Variable Gravity, how long in each?
1
Where do the crew sleep on the ISS? Where are the sleeping quarters?

20
Do astronauts aboard the International Space Station (ISS) actually use their legs?
11
Do Astronauts snore when sleeping in Zero G?
6
How do we create a zero gravity environment on earth?
15
How do astronauts and cosmonauts sleep on a Soyuz?
1
Where do the crew sleep on the ISS? Where are the sleeping quarters?
43
Why isn't a centrifuge used for astronauts on the space station?
5
Do astronauts use their toes to grip with in zero gravity?
96
Who was the first human to sleep - perchance to dream - on the Moon?
8
Where will the fourth crew dragon astronaut sleep?