Could a rescue spacecraft be in an orbit with rendezvous windows for ordinary LEO, GTO or deep space launches?

Sometimes orbital insertion fails which could be fixed by a space tug. I wonder if a tug could be placed in a long term orbit such that it sometimes matches the intended orbit of a launch from Earth. If the orbital insertion fails, then the tug would not be far away. Application could be for GTO, deep space and for human spaceflight to LEO. It would be available for many launches, those who choose to match their launch window, but would only be consumed when it is needed. Are such rendezvous windows too rare to wait for?

An on-orbit rescue tug isn't likely to be viable in the near future.

Automated docking is typically only done at the ISS and requires extra hardware, both the docking port and the radar systems to align vessels. This is a non-trivial amount of additional mass and power required just to allow a space tug to have a chance of rescuing your satellite in the unlikely case of failure.

Any thrust you apply must be through the center of mass of the combined tug + satellite or you'll get rotation. That adds an additional design constraint in limiting where the docking attachment point is on anything that would want to take advantage of your space tug. Also, the satellite is going to need to support docking in-line with the direction that it can tolerate thrust. Unfortunately, that's the perfect place to put an engine so anything self-propelled is likely to have an engine right where you want to dock.

Many satellites deploy mission-related hardware after they're inserted into their final orbit (extend solar panels, antennas, sensors, etc). I understand they typically rely on internal battery power through launch/insertion. They won't be able to extend solar panels when there is still thrust to be applied (or the panels would bend/snap off) and batteries don't last forever, so your window of rescue is likely to be very small to fetch the satellite from the failed insertion and place it where it needs to be.

In LEO if orbital insertion outright fails then the satellite is reentering the atmosphere within the next couple of hours. That doesn't give much time for rendez-vous. It would be possible (given that the desired orbit lines up) to launch specifically to meet up with the tug, but that puts additional constraints on the launch window, just so that if something that usually works happens to fail you could recover from it.

Also, plane changes are expensive to the point that mission planners avoid them if at all possible. There are a wide variety of LEO missions in different inclinations: 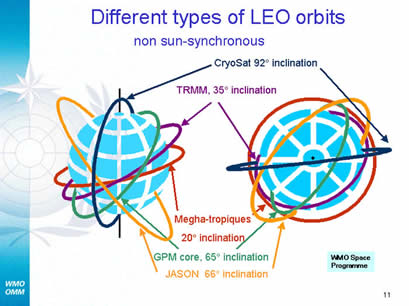 Even if your inclination matches that of the launched satellite you also have to align your longitude of ascending node to be in the same plane, and again, different missions have different desired planes so they are very unlikely to be launching into the plane your tug is parked in.

If your orbital insertion mostly works (you're in orbit, just not where you wanted to be) then you may have time to catch the satellite but the manner in which it failed becomes important. If the satellite is left tumbling rapidly like the Progress flight that failed a while back then you won't be able to dock with it anyway.

In terms of time before decay and alignment boosting a satellite from an equatorial LEO parking orbit to GEO is more reasonable: your tug could already be in a LEO equatorial orbit and would just need to rendez-vous with the satellite. On the other hand, according to this chart the delta-v required to get from LEO to GEO is nearly 4 km/s (or ~2.5 km/s if the satellite will cover the transfer orbit to GEO burn). That's nearly half the delta-v required to just get to orbit (9.5 km/s), meaning your tug is going to have to be fairly large to carry enough fuel to even go one way and if you want to bring it back to LEO to reuse at least double that.

In this case you've also got to deal with an upper stage that failed to (re)ignite to get from the parking orbit to transfer orbit. Even assuming correct separation of the stage from the satellite to allow your tug to attach the stage will be nearby with the potential for collision (depending on how quickly you get the tug there and why it failed).

Rescue of interplanetary missions stuck in LEO would probably have the biggest pay-off because launch windows come so infrequently. On the other hand, providing the delta-v to get a mission on an interplanetary trajectory would require a large tug and to complete the mission it's likely the tug would have to go along for the entire mission. That means you're not getting it back for reuse, and it also has to have enough power to send a signal back to Earth from wherever it ends up.

Also, if the propulsion for the mission is built into the spacecraft (rather than being a detachable stage) you now have to haul all the fuel that would have been used with you, adding mass to what the tug has to move.

A lot has to go right for a tug to have a chance at working, and mission planning/spacecraft design would have to support the rescue tug (docking ports, launch into a plane with the tug). Also, all planning to support the tug is planning specifically for propulsion to fail in specific places (but not catastrophically) and if that were so compelling a reason I would think we'd see backup systems to recover (I know Falcon 9 has engine-out capability on the first stage, I can't find any indication that upper stages have backup systems).

Considering how rare failure in a situation where a tug could help out I can't see the support for a tug being built into satellites as a backup plan. On the other hand, if you could build a space tug that were efficient and cheap to operate that may have potential for being incorporated in mission planning as the first option.

This is probably not worthwhile. Essentially, a mission would have to remain in orbit to rescue a mission that made it most of the way there, but not completely. These types of mission are fairly rare. Making the rendezvous would be difficult, the fuel from the tug would have to work long term, the objects would somehow have to dock, and the launch window would have to match pretty closely. All of these put together are pretty unlikely to happen, and even if they did, one is still launching a satellite into orbit to make it happen, which could probably do better if it had a real launch.

What might work better is to have a secondary launch to fix a spacecraft that had too low of an insertion, launched shortly after the issue with the primary launch. That should reduce the cost of the mission, and make it more likely to succeed.

Not the answer you're looking for? Browse other questions tagged orbital-mechanics rendezvous rescue-missions space-tug or ask your own question.

16
Why was TESS' launch window open for only 40 seconds per day?
6
Would any manned orbital launches to date have been possible (but lower) if they were launched retrograde instead of prograde?
2
Is there any kind of research on *sub*-orbital rendezvous-ing with a space tug outside the atmosphere?
4
What are the orbital-mechanical advantages of a long (100+ second) sub-orbital coast phase?
0
“NASA's Europa Clipper has been liberated from the Space Launch System” How would the “physics” of a Starship-based mission differ from SLS?