What is the ISS maximum altitude?

I see two threats to the ISS as its altitude goes up:

Disregarding the fact that it would be impractical because of higher service cost, how high could we put the ISS while maintaining it safe?

Additionally, how high could we push it with current technology? (Perhaps using a better launch site like Kourou)

All of these IGAs, MOUs, SPIP volumes, and control centers are required to support a vehicle that, at Assembly Complete, is to be the largest man-made object ever to orbit the Earth. The ISS is to have

• A pressurized volume of 1200 cubic meters

• A crew of six (three until Assembly Complete)

Rationale for these limits is given in section 1-5:

The driving factor for the ISS altitude is cheaper maintenance, and orbital debris mitigation. There is an optimal altitude for maintenance, which would actually be a bit higher than it is, because the ISS has to actively maintain its altitude by thrusting on a regular basis, while if it was higher that wouldn't be the case.

Okay, so looking at the chart below, above 1600 would also be a good area. Let's take away the fact that this is harder to maintain, and would create more space debris. This, however brings one to the Van Allen belts, which start around 1000 km. The ISS doesn't really have the radiation shielding to manage that environment well, although it could be added.

Bottom line is, even if cost wasn't a factor, it still makes sense to have the ISS at or near the altitude it is currently orbiting, until the space debris can be removed, or better radiation shielding added. 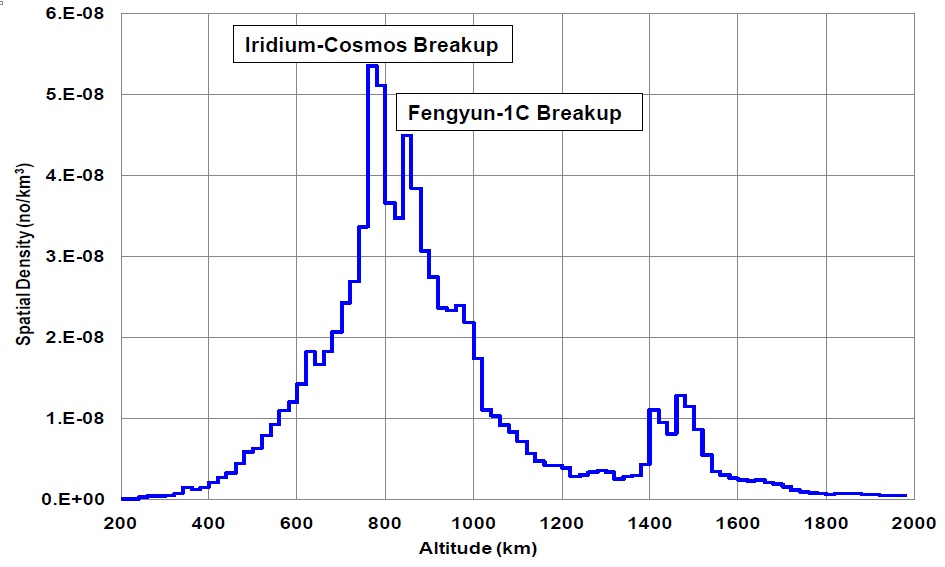 Not the answer you're looking for? Browse other questions tagged iss nasa low-earth-orbit soyuz-spacecraft altitude or ask your own question.

6
What orbit would a space station need to stay in orbit for N years?
6
Does the ISS still "need" to be at around 400 km?
4
Have there ever been significant changes in the altitude of the ISS?

13
Does it snow in LEO?
4
Do meteor showers from 209P/LINEAR cometary debris pose a threat to the ISS and other Earth-orbiting satellites?
4
LEO insertion altitude
3
What is the power required to move the space station?
2
Altitude control of ISS via Progress-MS
4
Have there ever been significant changes in the altitude of the ISS?
8
Why doesn't the ISS use ion engines to maintain altitude?
7
To what extent is the orbital Time Period of ISS affected by soyuz thrusters?
7
What are the causes of these episodes of faster than average altitude loss by the ISS?
7
What is the maximum allowed occupancy of the ISS?