Highest number of satellites launched on a single rocket

What is the highest number of satellites that have been launched on a single rocket? What were the number of stages used in that launch?

(It may be from the past or a future mission)

(This answer is up to date as of the end of 2013, the answer changes periodically, however, so...)

Depends on your definition a bit. I'm going to say that satellites must be able to communicate with the ground independently. Given that definition, The highest attempted (That I know about) was the DNEPR launch of 2006, with 18 satellites on board. The highest successful appears to be an DNEPER launch on 17.04.2007, with 12 satellites on board. The highest planned is a 29 satellite launch of a DNEPR planned sometime in 2013. The most I can find of a single design that was successful appears to be the latest ORBCOMM Falcon 9 launches, which carried 11 satellites of the same design. Globalstar attempted to launch 12 on the same mission on 9/9/1998 on a Zenit 2, but the mission failed.

For non-communicating satellites, the most is no doubt Project West Ford, which launched 480,000,000 needles in to space to serve as an artificial ionosphere.

For the record, here's some of the statistics about the number of stages for each vehicle (Thanks Paul!):

In 2014, the record for the maximum number of satellites to be launched in a single mission was set by the DNEPR rocket from Russia, releasing 37 satellites, 34 of them directly. Source: NASA News

On the 24th of January 2021, the SpaceX Falcon 9 rideshare mission Transporter-1 deployed 143 satellites to a sun-synchronous orbit. 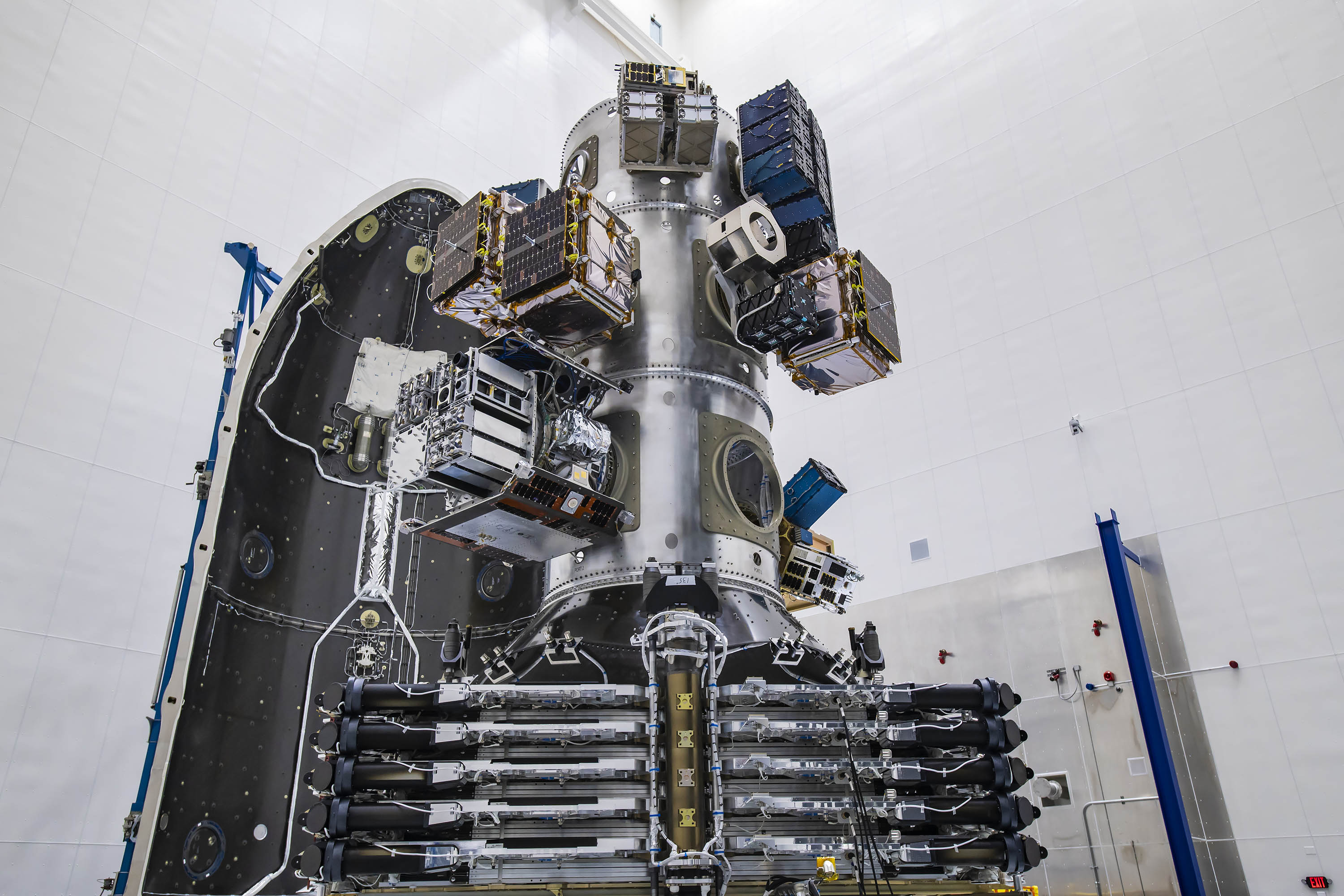 (NASASpaceflight also made a labelled image)

List of the satellites (roughly in order of deployment):

Strangely, when you add up the timeline of satellite deployments, you only get a number of 141. The D-Orbit Launcher and the SHERPA-FX might be counted as satellites because of their hosted payloads.

Depending on how fine (or creative!) your definitions are, the answer may be "about a hundred, and either 2014 or later this year".

The SpaceX CRS-3 flight in 2014 carried the main payload, a Dragon resupply flight for the space station, and five cubesats. One of these, KickSat, was a container designed to release 104 independently orbiting microsatellites. Each would have a small radio, and is apparently capable of independent ground communication. However, the timer on the satellite failed, and it did not release the microsatellites before re-entering.

A second attempt is due to fly in July 2016; it's not clear exactly how many microsatellites are involved this time around, or how many other secondary payloads are on the launch, but "around a hundred" seems a good estimate.

ISRO is scheduled to launch 103 satellites on a single PSLV next month (Feb 2017).

Now the previous answer might be outdated. ISRO sets the record with 20 satellites launched at once.

The Indian Space Research Organisation (ISRO)’s big mission 22nd June 2016 has seen 20 satellites launched successfully in an orbit. The PSLV-C34 mission is being called as the biggest ever mission for India’s space agency.

Largest amount of satellites launched on a single rocket:

Using the definition of "Satellite" as something designed and capable of communicating with ground independently, on April 28, 2008 a C9 mission PSLV rocket of Indian Space Research Organisation successfully placed 10 satellites in orbit

There was a mission to launch hundreds of microsatellites from a canister by some university program. The AF was worried about this launch because of their capabilities to track object <10 cm is extremely limited. The canister went up in orbit and failed to deploy the hundreds of satellites to the relief of the USAF.

I cannot remember the University Project. It would be great if someone figured this out.

1) PSLV February ,2017 ISRO is going to launch 103 satellites in this PSLV. The present record for launching the highest number of satellites at one launch is held by Russia which launched 37 satellites on June 19, 2004 earlier this was planned to be launched in January with 83 satellites

2) PSLV 28 December 2017 This launch is contracted by Team Indus, for Google Lunar X Prize , this would be an exceptional launch since this would be carrying 3 rovers to moon ,while never have a rocket carried even 2

3) GSLV Mk III 20 January 2017 This will launch GSAT-19E , a successful launch will make ISRO self reliable for launching satellites of 3200 kgs range to geostationary orbits

user18185user18185
1
$\endgroup$
1
Add a comment  |
Highly active question. Earn 10 reputation (not counting the association bonus) in order to answer this question. The reputation requirement helps protect this question from spam and non-answer activity.

Not the answer you're looking for? Browse other questions tagged launch rockets record or ask your own question.

13
Which currently operational orbital launch vehicle achieves highest system-specific impulse?
1
Websites about past and future missions
0
Highest number of distinctly different satellite designs on a single rocket
7
What is the most number of stages, including fractional stages?
10
Why aren’t rocket stages modular and interchangeable?
3
What is the maximum practical deltaV obtainable from a chemical rocket launched from earths surface?
7
Has any rocket been launched into orbit from a plain flat surface?
3
Most noodle-like (highest aspect ratio) orbital launch vehicle ever?
3
Largest number of rockets launched into space from a given launch site in a 24 hour period?