ESA provides commercial satellite launches. But is this actually a profitable business?

When you would subtract the cost of any purely scientific activities and only look at the commercial launches, would ESA generate a profit or at least be able to operate without requiring subsidiaries from the member countries? The financial statements in the ESA Annual reports accumulate the costs of both commercial and scientific operations, so it is hard for a layman to tell how much of the expenses are which.

It might be more meaningful to look at Arianespace rather than ESA - Arianespace is the commercial operation (owned ~1/3 by CNES and ~2/3 by various European aerospace firms) which actually operates the launcher. ESA currently gives it a fixed cash payment every year (~100m euro in 2013 & 2014, 145m in 2012, possibly less in 2011).

In recent years (after taking account of the ESA subsidy) it's about broken even - in 2014 it posted a slight profit & similarly in 2012; I can't find a precise figure for 2013 but it was apparently a small loss. So it's not making a profit, but nor is it falling apart or in a declining spiral; ESA are presumably happy to pay a (relatively!) small regular subsidy to ensure Arianespace stays in operation. Note that subsidies have declined substantially since 2005.

Strictly speaking this will include "non-commercial" Ariane launches purchased by ESA (presumably on a cash basis), but it's probably still useful.

According to FAA estimates, European commercial launch revenue was about $920 million in 2014, which was a 30% increase from 2013. This was the second highest of the regions compared after the USA. 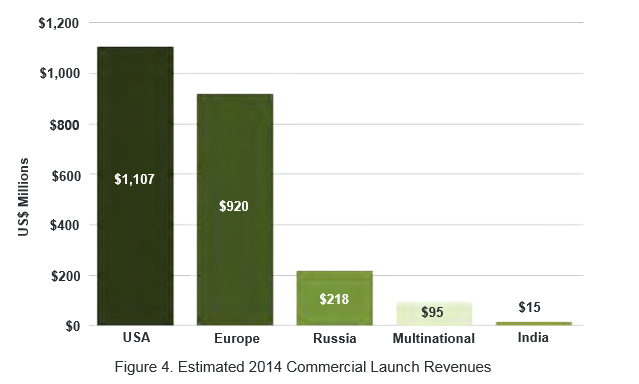 The FAA states the following method was used to derive the estimate:

These revenues are assessed based on commercial launch price estimates for each launch vehicle using publically available information.

The ESA's total revenues for 2013 were about $4300 million. If we assume a similar amount for 2014, then commercial launch revenue would be about 20% of total revenues. This seems to be a reasonable amount.

Unfortunately, we can't compare directly to expenses since the ESA doesn't seem to distinguish commercial and non-commercial costs.

NASA's entire Commercial Spaceflight budget for 2014 is $821 million. If the ESA has comparable expenses, then commercial launches are certainly profitable.

Not the answer you're looking for? Browse other questions tagged launch commercial esa or ask your own question.