Is the Polar Satellite Launch Vehicle capable of taking a 1,350 kg orbiter from the Earth to Mars as this article states?

Yes, but to do so they're having to make significant compromises to the mission. It was originally intended to fly on India's next generation, significantly higher performing, Geosynchronous Satellite Launch Vehicle (GSLV) but delays and problems (3 of 7 flights have failed catastrophically, only 2 were fully successful) in that program forced them to use the older Polar Satellite Launch Vehicle (PSLV) instead.

The MOM/Mangalyaan probe has a higher fuel to payload mix than the NASA/ESA probes mentioned above, and will be entering in a highly inclined orbit to save on the amount of fuel needed to enter orbit. My supposition is that a large fraction of the fuel in the orbiter originally intended to put it in a low Mars orbit is instead being used to compensate for the less powerful launch and send it into interplanetary transfer orbit instead. 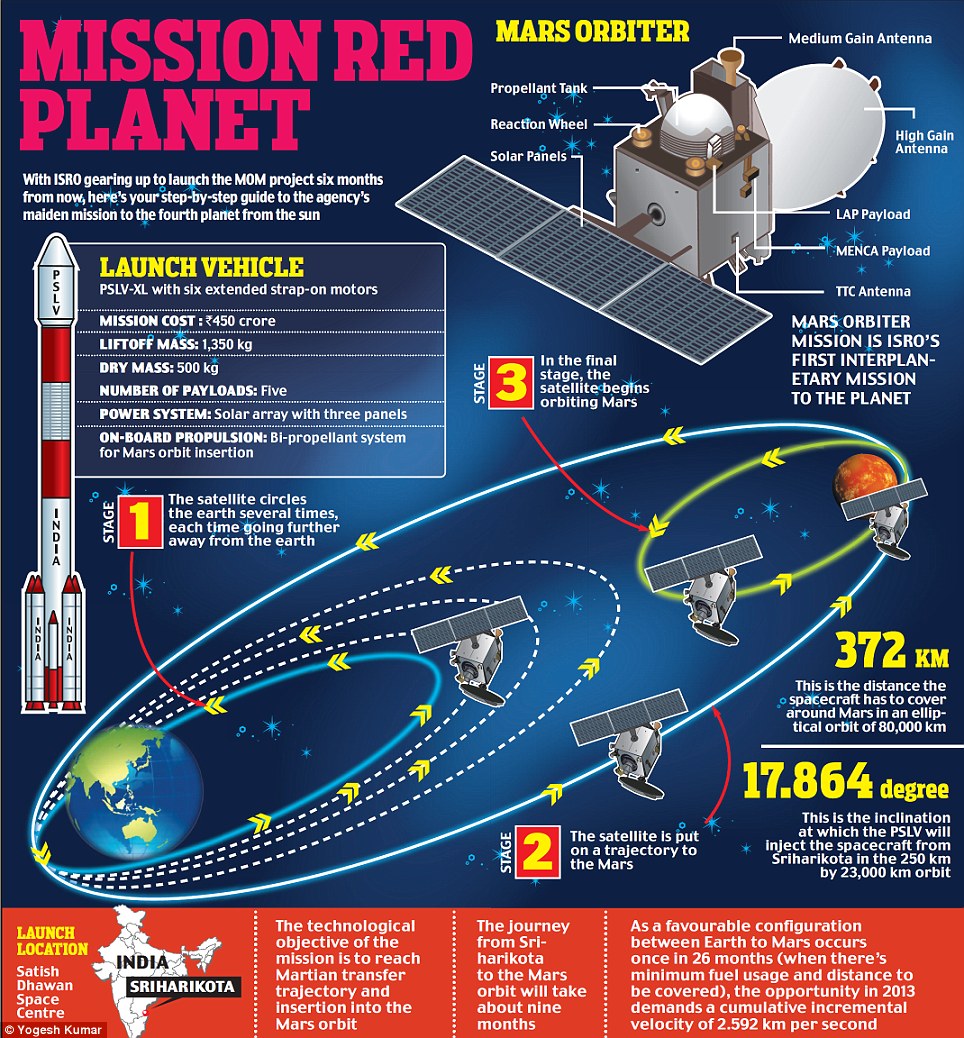 The highly inclined 80,000 / 580 km orbit means it will only spend a minority of its time close to the planet, and severely limiting it's sensors effectiveness except for a small fraction of each orbit. However, in some ways this is less severe a problem than it may first seem. Some of the instruments are cameras: And for imaging purposes the limiting factor is not how fast pictures can be taken by the orbiter; but the low bandwidth available to return data to Earth. As a result for imaging, the limitation will primarily be in what they can take pictures of at any given time; not the total number they can send home.

Comparing it to other Mars orbiters:

Not the answer you're looking for? Browse other questions tagged mars isro pslv or ask your own question.

28
Does India have plans to explore Mars after Mangalyaan?
7
Approximately how much fuel will ISRO Mars Orbiter have available when it enter Mars' orbit?
6
Was the ISRO Mars mission really scaled down?
10
Why did ISRO require additional tracking ships in the South Pacific for its MOM mission?
34
Why is there a "coasting" phase in some space launches?
7
What are the falling parts in this ISRO rocket launch?
2
Why is ISRO's PSLV named "Polar"? Are there challenges for other inclinations?
1
What is the purpose of the pairs of cylinders on the interstage of PSLV?
28
Why does the Indian PSLV rocket have tiny boosters?