Is there a map or list of all the lava tube skylights the LRO has detected on the Moon?

I have read that so far the LRO has detected about 200 skylights - they appear to be holes into larger spaces below them, which could be lava tubes or domes.

I would really like to know where all of them are. ASU's LRO site has all the images and multiple ways to search through them, but I don't know how to search for this. There is the RDR product search page... I don't know what that means but it looks like it might be the place if I knew how to use it.

But also, these are being actively searched for and there has to be a list out there of all of them, even a map. Does anyone know where?

There is a map of lunar pits, created by R. V. Wagner and M. S. Robinson of the School of Earth and Space Exploration, Arizona State University, in 2014. From Distribution, Age, and Formation Mechanisms of Lunar Pits (PDF) by mentioned authors: 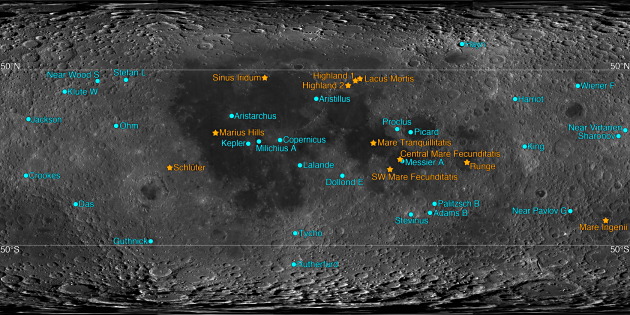 Click on the image for a higher resolution version. Complete list with locations should be available in the Distribution, formation mechanisms, and significance of lunar pits Icarus volume by same authors, but is paywalled. From its highlights:

Authors have searched for lunar pits with own PitScan, a semi-automated search algorithm that scanned LROC NAC images for pit candidates, and 200x200 pixel crops were created for human confirmation. The algorithm went through a three-step process:

About that RDR, it stands for Reduced Data Record and is described in this LROC page:

LROC utilizes more than one million images we've colleted in a variety of data products. An EDR (Engineering Data Record) is an image and its associated metadata. A CDR is and EDR that has been decompanded and calibrated. An RDR (Reduced Data Record) can be made from as few as one image or as many as thousands that are processed and reduced for the purpose of, for example, making a mosaic that combines multiple images of a particular area or feature, or a high resolution global digital elevation model created with stereo observations.

There are many way to search through LROC's Data products:

More info about lunar pits from Lunar and Planetary Science Conferences (this was bugging me because I couldn't remember where I saw talks on the topic):

Not the answer you're looking for? Browse other questions tagged the-moon planetary-science mapping lro or ask your own question.

7
Could there be caves/underground tunnels in Venus?
2
What would happen in this cavern on the Moon?

9
How do I properly use the LROC Image Search tool?
10
How deep is the regolith around this crater?
2
Mapping the moon: how to use the Lunar Reconnaissance Orbiter (LRO) image data?
11
Why was the 100m Green Bank dish needed together with DSN's 70m Goldstone dish to detect Chandrayaan-1 in lunar orbit?
1
Was there magma on the moon ? Is it still there
7
Could there be caves/underground tunnels in Venus?
3
Did NASA remove four major photographic atlases of the Moon from its Technical Report Server? Gone for good, or just hype?
4
Is there a list of world wide upcoming space events on the web?
5
Where to find the full reflectance map of the Moon?