Question is rewritten, so some details are probably lost.
Here I make a sketch of the launch principle and I want to know, if it could improve the whole launch process regarding its safety in first place. In other words, I suppose that this method should reduce the probability of a fault by a launch.
This is a possible carrier, which should be reusable in ideal case. The rocket is placed on the top and splits off at certain height:

A ramp is ca 30 degrees on its end. This looks realistic, since more inclination means more construction complexity and thus safety. After liftoff it should smoothly correct it's trajectory to more vertical position, but that is not a must, it depends on how much fuel I can save due to total air resistance difference: 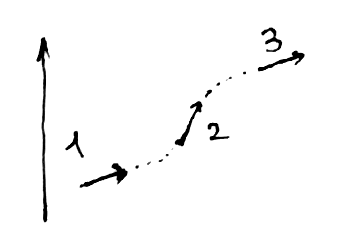 Rocket detachement happens when it is time to make the trajectory more horizontal again, lets say at 10 km altitude.

Mass of the vehicle I suppose should be also optimised, it should not be too big. The carrier should land after split off, how exactly, I don't know, it is subject to a separate question.

Please note, this all is to a known grade just a speculation, since I am not expert and do not know specific parameters. Also it is not focused on fuel consumption aspects in first place.
Main benefit as I see it, we don't need a huge engine on first stage, which I believe is unnecessarily powerful.
Also the vehicle by vertical start does not seem to be much controllable, if at all. Small crack on the nozzle edge - and it will loose stability. Mechanical vibrations in engine area, overheating, it all adds scepticism. Looks so freaking dangerous even compared to jet fighter take off from an aircraft carrier.

More safety, since we don't have such mechanical stress on start, which is essential for the rocket itself and its cargo.

In a vertical launch, mechanical stress due to acceleration is lowest at liftoff, and increases gradually as you go up: as fuel is used up, the rocket gets lighter while thrust stays the same. The point where acceleration stress is highest is somewhere near the end of the first-stage burn.
Also, mechanical stress is all in one direction: vertical. This means you can build a rocket that's strong in the vertical direction, but weak in the horizontal directions (because the forces in those directions are much smaller). Some rockets take this to such extremes that you can't transport them horizontally unless their tanks are pressurized.

A second source of stress is aerodynamic drag. The point where this is highest is called max-Q. This is a function of altitude (higher altitude=thinner air and less drag) versus speed (more speed = more drag). In a vertical launch, max-Q is at high altitude and often near the end of the first stage burn.

Now let's look at a horizontal launch. The acceleration force now has two components: you've added a lateral force throughout the bend in your ramp. You need to make the rocket stronger (=heavier) to compensate for this. If you want to decrease acceleration, you need to make the ramp longer. Pretty soon you're building a structure that's capable of supporting several hundred tons and has to be 10 km long and 1 km high. This is not cheap by any means.

Because you do some of the acceleration while horizontal, the rocket will be going faster at low altitudes. This means more drag, and a higher max-Q. Again, you need to make the rocket stronger (=heavier) to compensate for this.

As for safety: in a vertical launch, you can ignite the engines and make sure they're working well before the rocket leaves the ground. In a ramp launch, you have to start the engines while the rocket is almost at the end of the ramp. Any delays or engine problems, and your rocket will fall off the end of the ramp and be destroyed (or alternatively, you'll have to make the ramp twice as long to provide a safe runout area).

Any space launch system should be capable of taking the payload (satellite) to a certain altitude. The amount of work done in this lifting is the same whatever may be the method/trajectory used to do this lifting (because gravitational potential energy depends only on height).

As for the forces acting on the rocket, the aerodynamic forces will be the same and the only force that can be reduced thrust so that the acceleration is very small.

However, this increases the time spent in atmosphere and associated drag. It is important to note that all horizontal launch systems which have been developed use air breathing engines and are aimed at reducing the requirement of oxidizer to be carried.

35
Why don't we use catapults to get to space?
11
What would make a rocket sled launch feasible?
14
Horizontal space launch
5
Is non-evacuated tube maglev launch possible?
5
Why are these Falcon 9 1st stage bodies (apparently) wrapped in black plastic for transport?
5
How are fragile rocket stages, built to withstand vertical stress, transported horizontally?

10
If Space Adventures actually does a Soyuz around the Moon, will this be the first real Earth Orbit Rendezvous launch?
5
Splitting water quickly to turn a water rocket into a H/O rocket at launch: could it work?
16
Was SpaceX's launch of Formosat-5 more vertical than normal for any particular reason?
2
Is there an optimal accelaration for first stage going in LEO?
3
How to find the optimal launch trajectory for a rocket launched from a planet with an atmosphere?