Why are rocket mass on the launch pad and payload mass to LEO not strongly correlated?

What explains the relation between how much a launcher weights on the launch pad, and how much mass it can lift to orbit?

I had expected that more payload requires more fuel to be launched and that a launcher is built around that fuel mass. I'm surprised to see that these two measures are just weakly correlated. The data I use here is indeed sloppy but it can't be that much off, or can it? (I'm getting suspicious). I can understand that Falcon 9 v1.1 is much heavier than v1.0 because it is supposed to be more robust and have fuel enough to be reusable. I note that the (older style) Russian and Chinese launchers are the least efficient according to this simple ratio, but with Ariane 5 a bit worse than Proton. I'm surprised to realize that Atlas V 551 and Ariane 5 both lift about the same mass to orbit, but that Ariane 5 is well more than twice as heavy on the launch pad! Is it because of the large solid fuel boosters? What other factors explain this lack of general relation?

Below are figures I took from Wikipedia about eleven different launchers. I've picked values for the maximum LEO capacity configuration. The four columns are: 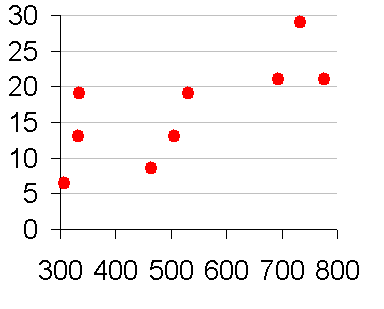 Chart: Tons payload to LEO versus tons of rocket on the launch pad.

It typically takes a total expenditure of 9400-10000 meters per second of delta-v to reach LEO.

Solid rocket boosters have relatively low specific impulse: 275 sec for Atlas V's SRBs. Liquid hydrogen engines have high specific impulse: 449 sec for the Atlas Centaur upper stage. Kerosene engines fall in between. So depending on how heavily a launcher relies on (cheap but inefficient) solids, you can see that the mass efficiency of the launcher as a whole is going to be very different.

In the end, mass at launch -- particularly first stage mass -- is less important than launch cost, so a heavier but simpler to construct structure may be preferred.

In addition to the other answers, larger rockets are more efficient:

And speaking of the Falcon 9: the v1.1 in your chart has its payload listed for the 'reuse the first stage' flight mode. In expendable mode, you can expect the payload ration to be slightly better than the Falcon 9 v1.0.

I believe Russell Borogove's answer is correct but maybe could be stated a little more directly:

The reason your 2 factors of payload mass and liftoff mass don't correlate is that you are ignoring the other factor in the equation. The 3 main factors in the rocket equation are mass ratio, delta-v, and specific impulse.

Since your delta-v is basically fixed (to LEO) you are trying to correlate mass ratio without using specific impulse. If you can calculate a back of the envelope value of system specific impulse for the launchers in your list, I think your data will make a lot more sense.

Here's a simple thought experiment- take 2 boosters that deliver the exact same payload weight to LEO. One has a system specific impulse of 300 and the other has a system specific impulse of 450. The one with bad engines is going to be enormously bigger at liftoff and yet it delivers the exact same payload, so on your chart these data points would look uncorrelated.

I don't know if that adds anything useful, but lets see:

The second part of the equation is the only practical correlation between total mass and payload mass that I am aware of.

It's my first answer here at Space Exploration and I'm still a student, so please go easy on me :)

10
GSLV MK2 vs Falcon 9 - Reasons for Huge performance difference
10
How could we make a fair comparison between space rockets regarding their payload mass in low Earth orbit and Earth escaping?
2
Can a lighter rocket lift more than a heavier rocket?
1
Have there been any correlations between rocket size and the delta V it achieves

9
What tonnage can current heavy rockets land on the Moon?
9
Why are there such large differences in launcher payloads to higher orbits (GEO, Lunar) compared to LEO?
8
How is "payload to LEO" estimated for a launcher?
11
How does static test firing before launch affect design of rocket mass and structure?
8
Why is the Dragon small compared with the Falcon 9 LEO payload
5
How much fuel can Falcon 9's upper stage bring to orbit, without any other payload?
8
Why will SLS Block I bring less mass to LEO than the STS shuttle system did?
2
Was the Space Shuttle the most efficient orbital launcher, based on the launch/LEO mass ratio?
11
Why aren’t rocket stages modular and interchangeable?
4
Rocket fuel cost to launch 1 kg to orbit