Shapes of rockets on the Earth with no atmosphere

What would rockets look like if the Earth had no atmosphere?

Atmospheric drag and gravity losses account for about 1.5-2km/s of the normal 9.4-10km/s launch-to-LEO budget.

With the trajectories we use, the atmospheric drag accounts for only a small portion of that, but we'd use more efficient trajectories and lower orbital altitudes if we didn't have to worry about the atmosphere! So at a guess, we'd need 8.5km/s instead of 10km/s of ∆v, which because of the nonlinear nature of the rocket equation, suggests you'd need only about 55-60% as much rocket for a given payload.

However, the design of Earth-launched rockets is heavily constrained by the atmosphere. They're made tall and skinny to minimize drag, and have a streamlined skin around their tankage and payload, all of which adds weight. A rocket made to launch from a vacuum world would be made mostly of big spherical tanks attached to a minimal frame. The more compact shape would lead to a lot of miscellaneous weight savings -- shorter cable runs, propellant lines, etc -- which, while individually small, would add up.

Return missions would be just brutal, though. In our manned missions, atmospheric braking provides essentially all the deceleration from orbital speed. Without the atmosphere, if you needed 8.5km/s to get up, you need 8.5km/s to get back down in one piece. To land a one man capsule like Mercury you might need to get something like 50 tons of payload into orbit!

If Earth had no atmosphere I think you would see a far more radical change to spaceflight that the rocket redesigns other posters are talking about. While rockets might have been used at the dawn of the space age I think we would be using something akin to maglev trains for launch. Take a big flat area and put a very, very long track on it. Unlike a train it would boost at rocket-type accelerations. You boost your craft until it reaches the velocity of an orbit with perigee at 0 and apogee at the desired altitude. The craft heads off into space, the train slows and is recovered. When it reaches apogee it does a circularization burn.

If your accuracy is good enough you can even use a similar system to land--although I would do so with cables to grapple the returning spacecraft rather than attempting to actually dock with the train.

Fundamentally, the atmosphere of the earth affects the launch vehicle in two ways:

A simple rocket equation shows how the thrust produced by the rocket is used to overcome the forces acting against it. The thrust, $T$ can be given as,

As for landing, it is instructive to see how NASA landed in MARS, which has about 1$\%$ of earth's atmosphere.

For landing the Phoenix in MARS, NASA had to use a two stage system- a parachute first slowed the spacecraft down and then retro rockets were used to land it.

If there is no atmosphere, it is useful in one way because there is no reentry heating of the spacecraft; however, the only way to land will be using retro rocket thrusters. 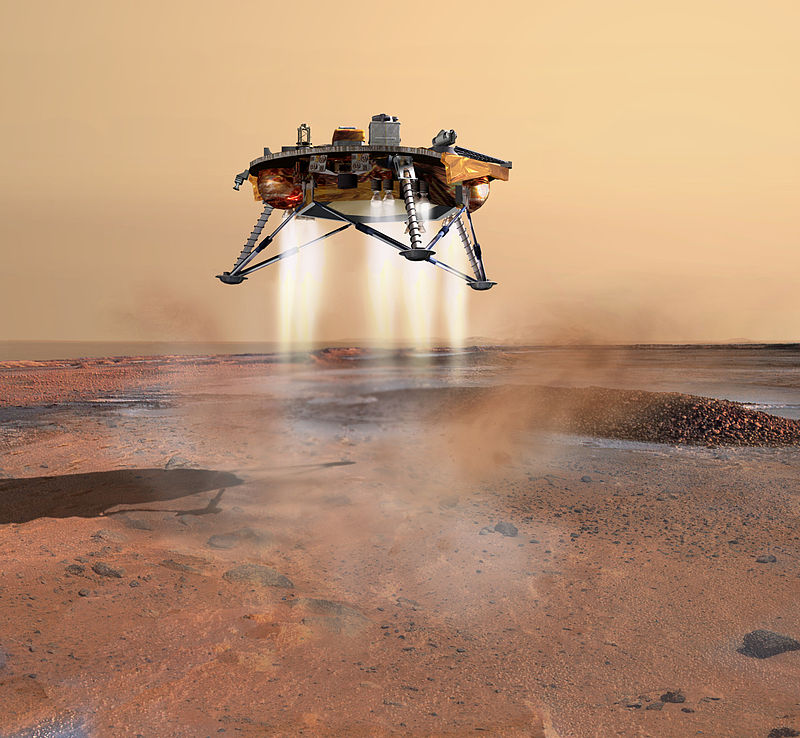 This will make the system much more complicated. Note that I'm comparing only the usual single-use systems, not reusable space systems like the shuttle.

So, if we were to consider only the launch/recovery, if there is no atmosphere, it will be comparatively much easier to launch the rockets into space while it will be as much if not more difficult in the return leg.

Not the answer you're looking for? Browse other questions tagged rockets crewed-spaceflight atmospheric-drag or ask your own question.

9
How would one come up with an optimal team-size for a manned interplanetary mission?
21
What is the ideal shape for a rocket?
86
How much bigger could Earth be, before rockets wouldn't work?
0
Are there studies on human Mars missions available?
17
Are rockets faster than airplanes?
45
Would it be easier to put humans on Venus rather than Mars?