Do any spacecraft orbit Mars on a polar orbit?

Polar orbit is quite common for observation satellites. It seems logic to put probes whose goal is to observe Mars (pictures, cartography) on a polar orbit around Mars. But traveling from Earth to any Mars orbit is difficult enough to avoid targeting any orbit whose inclination is far away from the ecliptic.

Have we sent any observation satellites or any other kind of probe designed to orbit over Mars on a polar orbit?

Targeting an inclination for a satellite is much easier than targeting a landing spot, and both are routinely done. The trick is to know exactly what you are aiming for, and take frequent small corrective steps to ensure it will happen. Here's a list of the objects I know orbit Mars in polar (Which I define as between 80-100 inclination) orbits:

In addition, MAVEN is in a near polar inclination (75), although not quite what I consider polar.

From NASA's May 2015 story Traffic Around Mars Gets Busy, here's a graphic depicting the relative shapes and distances from Mars for five active orbiter missions plus the planet's two natural satellites (Mars Global Surveyor is inactive and likely in safe mode since 2006): 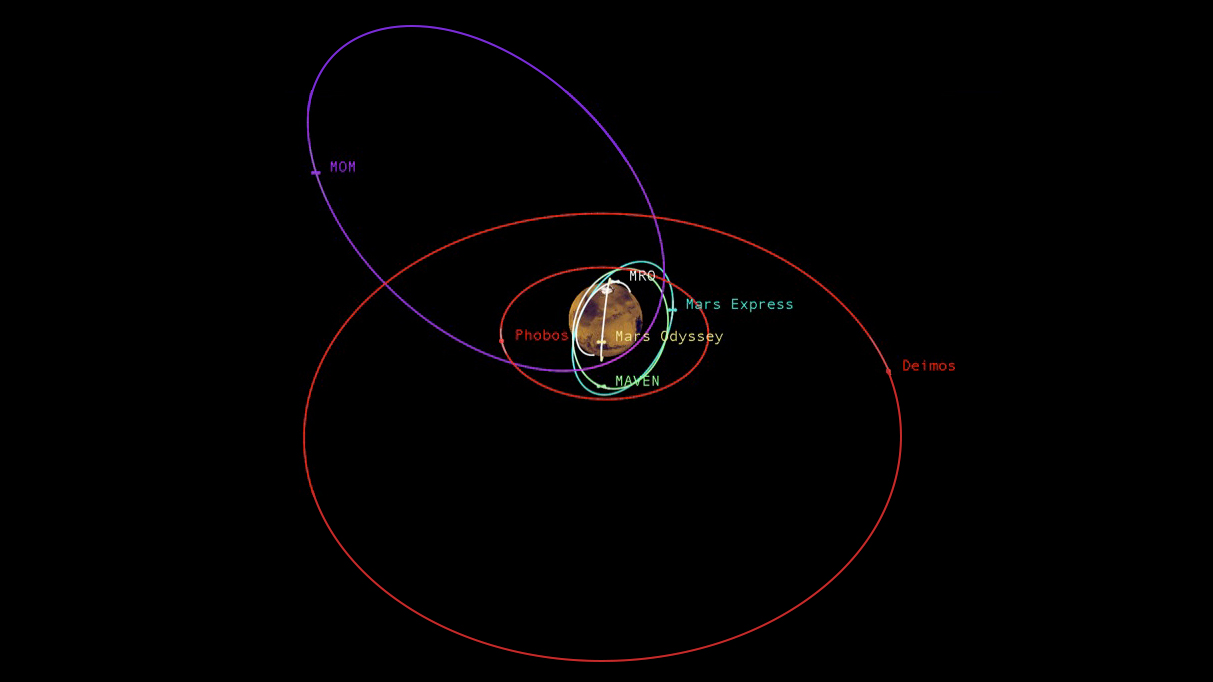 Not the answer you're looking for? Browse other questions tagged orbital-mechanics mars artificial-satellite orbit polar-orbit or ask your own question.

4
Optimal turning from equatorial to polar orbit
2
Lunar Polar Orbit
4
Orbits that allows observation of a polar region
1
Diamagnetic Polar Orbit
5
How will Chandrayaan-2 reach a polar orbit?
14
Is an Earth synchronous (?) polar orbit possible?
4
Was there a spacecraft that was clearly the first to be put in a polar orbit?
2
Why aren't satellites launched into a Polar LEO to get into Polar Heliocentric Orbit?
2
Why can Amazônia-1 observe the Amazon "every day or two" while Landsat takes 16 days between observations? Is "orbital magic" at play here?
11
Is there independent evidence that China landed a robot on Mars in May 2021?