Practical aspects of a total low energy transfer to the Moon have been seen in missions like GENESIS, which uses Weak stability Boundary legs of Earth and Sun to reach ESL-2. This four body model transfers justifies that:

Thus transferring the spacecraft around EML2 which

act as separatrices in the energy manifold of the flow through the equilibrium point, provide the dynamical channels in phase space that enable ballistic captures of the spacecraft by the Moon.

Such Transfers have theoretically been proved to have 25-40% delta-v savings.

Now, instead of going 1.5 million miles away, can we use just the Earth-Moon system? Dynamical nature of CRTBP in Earth-Moon system suggests that certain states in phase space if attained, can lead spacecraft to asymptotically approach L-points into periodic/quasiperiodic orbits (In case of Earth-Moon system, lets just have Jacobi Energy constant, just enough to open up zero-velocity surface at both EML-1 and EML-2)

Also, Homo/Heteroclinic connection between Lyapunov orbits between two L-points, like utilized in ARTEMIS allows us to traverse space in a way shown here: 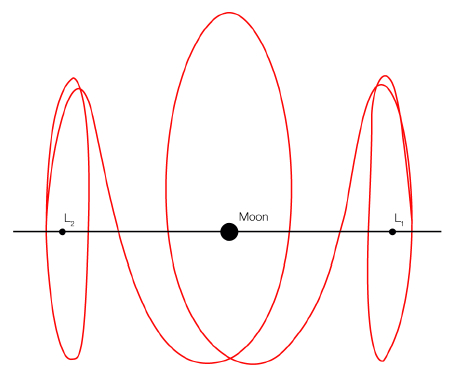 Can we in intermediate stage of such trajectory execute a decay manoeuvrer to get captured around the Moon in some way (because I'm guessing, we cannot get ballistically captured by the Moon from EML-1) ? What margin of delta-v would be needed in such case?

Alternatively, is there a possibility of ballistic capture from a periodic orbit around EML-2, spacecraft being transferred to EML-2 from EML-1 as in the figure ?

Wow, three years and still no answers!. I will give it a try. 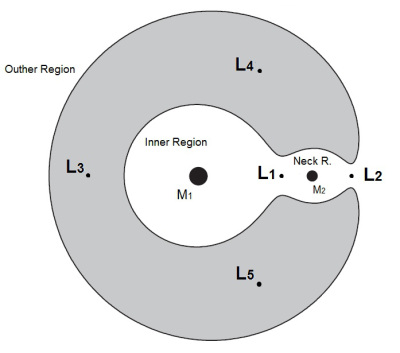 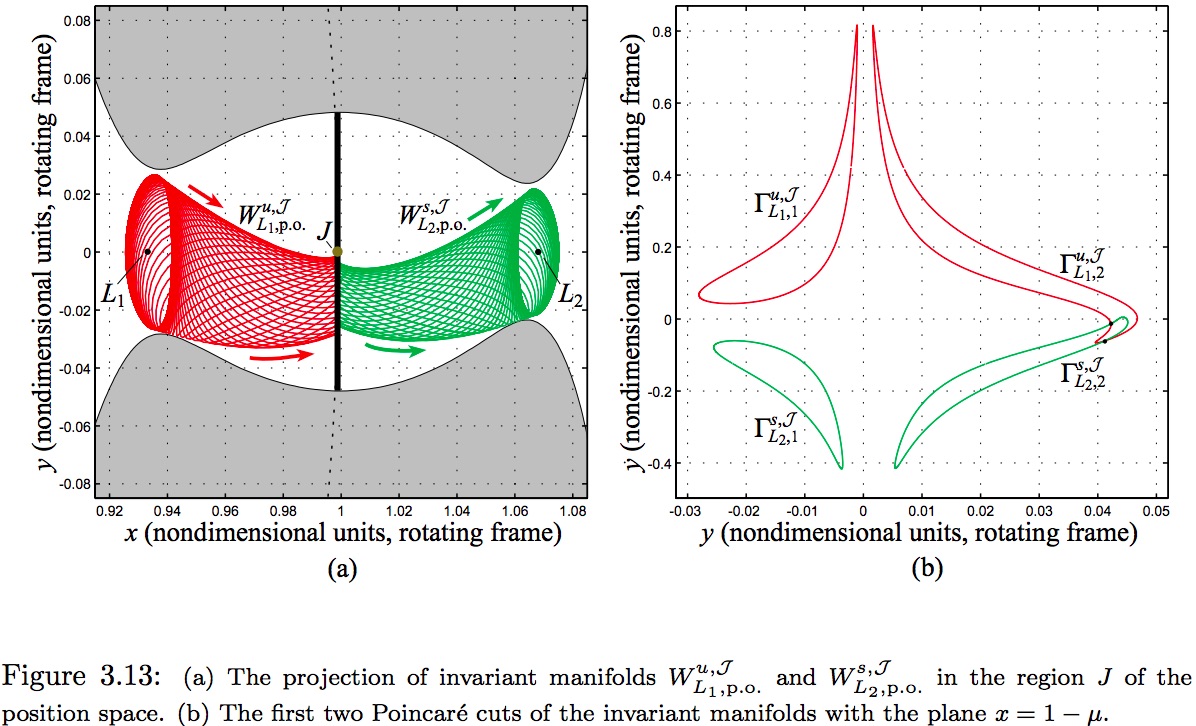 For example these illustrative figure (simplified for illustrative purposes for a planar case) shows multiple coincidences of the manifolds in the $y$ coordinate.

Not the answer you're looking for? Browse other questions tagged orbital-mechanics the-moon lagrangian-points low-energy-transfer three-body or ask your own question.

8
Will Chang'e-4 really take a month to “get to the Moon”? With what trajectory?
4
Chandrayaan-2; time taken to get to the Moon
4
How will the Lunar Gateway go to L2 and L1; how much delta-v is needed?
1
Nickname and citation for famous, historic three-body spacecraft trajectory design “manual”; something like “DoKaRoMo”?
2
How many times will the Photon fire its Curie in order to “reach the right spot” to deploy CAPSTONE towards the Moon?
2
Do Lissajous orbits have stable/unstable manifolds?
2
Did DSCOVR travel “along the stable manifold of it's future SE L1 Halo orbit” to get there?

4
Gravity braking and orbit around same body in Low energy transfers
19
Is the ideal transfer between two arbitrary planar orbits always a bi-tangential ellipse?
4
How will the Lunar Gateway go to L2 and L1; how much delta-v is needed?
2
Do horseshoe orbits have anything to do with Lagrange points? Do words fail us here?
8
Why haven't there been more space missions that use low-energy trajectories?
2
Are there some three-body orbits that can't be escaped? Can we know without propagating forever?
3
What is the cheapest possible way to land a crew of 2 on the moon?
5
What is the highest number of impulses required for an optimal orbital transfer?