Are there more operating interplanetary missions today than in the past?

From this question, we have learned that there is in fact fewer interplanetary missions being planned now than there has a decade ago. One of the items discussed as to why this might be the case is that there are more active missions, requiring more money, allowing less for new missions. Is that the case?

Specifically I'm looking for if there is more operating interplanetary missions now than there has been in the last, say, 10 years, and (bonus) what the funding required to keep those missions alive is compared to the overall budget. Ultimately, I'm trying to figure out if NASA's decrease in funds is responsible for fewer missions, or if it's that the current missions cost more (Or something else, as of yet to be determined).

The space program is busy right now, but Dawn and Rosetta and New Horizons and Cassini are 10 year old missions. Some asteroid and a Solar mission are planned. And something will be sent to Mars at every conjunction from now on. But the Moon, Venus and the outer planets are completely left without any plans for exploration.

Emily Lakdawalla at the Planetary Society makes a "What's up in solar system" summary once or twice a year. Maybe you could search them and find the trend? Her illustration below. She explicitly does not care at all about "planned" missions, only realized ones. At least space telescopes are looking good. Nobel Prize winning cosmologists might have more political influence than planetary scientists. (I think Emily misses Gaia space telescope there, the historical final nail in the coffin of astrometry, now we'll know where everything is, everything. Well, alot of it anyway).

I saw a talk of an astronomer who entertained with telling that their university arranges cross-discipline gatherings over lunch. He was upset because the budget for a space telescope had been slashed down to only 450 million dollar when he had asked for almost a billion. So he had lunch with a psychologist who was so happy because she had been granted 100,000 dollar for her project (figuring out what makes people happy or something useless like that). I wish more was invested in science, but among scientists, astronomers are not discriminated against. They go ask the politicians for billions of dollars to drill down a telescope in the Antarctic or to send something strange far away to study who knows what. And the politicians just nod and pay. It could've been worse. 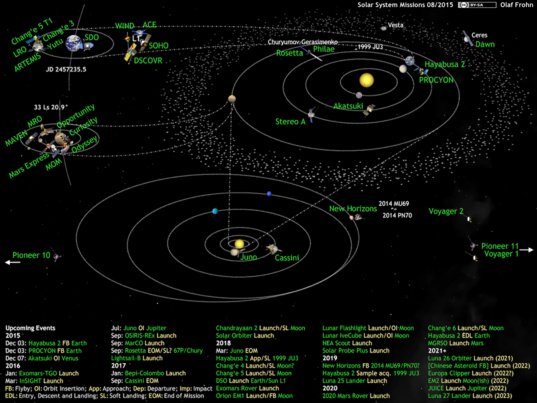 Ultimately, I'm trying to figure out if NASA's decrease in funds is responsible for fewer missions...

The decrease in launches and/or planned missions is due to budget cuts.

...what the funding required to keep those missions alive ...

The operational cost of maintaining contact with and retrieving data from any given spacecraft depends upon the age of the spacecraft and distance of the spacecraft from Earth. The former cost difference results from differences in designs/software/specs/etc. than the newer spacecraft (things change with time), which requires different personnel. Sometimes this can decrease the cost if things are simple and well understood by a younger, less senior engineer. Other times it can increase the cost if the only people that still understand such things happen to be very senior level engineers. It really depends upon the team and the mission.

The latter arises from the costs associated with maintaining and using either the Deep Space Network or the Near Earth Network. Using the DSN is expensive for several reasons that involve the use and maintaince of large area antennas, power, security, etc.

In general, operations costs are typically more expensive for spacecraft located farther from Earth than nearer (not always true, but a decent hand-wavy guideline).

...or if it's that the current missions cost more...

Yes, newer missions can cost more than older missions, but this is not always true either.

Changes in Requirements
Much of the reason for the increased cost is due to the decreased risk requirements. Meaning, newer missions are often held to a very high standard where failure is effectively not an option. The result is an increase in redundancy, testing, and quality of parts. Another significant fraction of the increased cost came from the increased price of launch vehicles bought from the United Launch Alliance (ULA).

Early Space Age Advantages
In the early days of the space age, missions were often approved based upon ~3-5 page proposals and they were designed, tested, and constructed by small teams (often a dozen or less university faculty and researchers). The missions had a lot of risk (i.e., little-to-no redundancies and/or the instruments being flown had no previous flight experience in space), were typically smaller thus requiring a smaller (i.e., cheaper) launch vehicle, and many missions flew fewer instruments. Most of the earlier missions were just much more simple in design and scope.

Changes in Opportunities
There has also been a significant decrease in the number of small explorer program (SMEX) and explorer program mission opportunities. Many of the recent (i.e., last ~10 years) announcements have been for the much larger and more complicated Flagship Program missions. These are more expensive for multiple reasons and the larger price results in fewer SMEX opportunities because there just isn't enough funding.

Summary
There are a semi-infinite number of reasons for why newer missions can be more expensive, but budget cuts often affect different parts of NASA differently. Sometimes budget cuts are specifically directed at one program (e.g., when congress cut funding for the manned spaceflight programs) while other times it is an across the board cut.

Regardless, you can see for yourself that NASA's budget peaked in 1966 and has been steadily declining since the mid 1990's until the most recent fiscal year, where the budget slightly increased.

Not the answer you're looking for? Browse other questions tagged nasa interplanetary cost or ask your own question.

12
How much of the International Space Station annual operating costs are due to human crew?
13
Are there any proposals for a permanent orbital interplanetary ferry?
0
How will the BE-4 engine “Save taxpayer money”?
4
What are the limiting factors for interplanetary mission trajectories?
3
Are there any atheist or agnostic American astronauts, past or present?
3
Why does the Perseverance Rover do sample caching?
2
Are the Perseverance rover's “drivers” working on Martian sols or Earth days right now?