Could airships be used to construct large structures in the air?

This is relevant for Venus colonization since that considers floating cities. Since one can't use cranes, I was thinking perhaps helicopters or airships could be used to move construction pieces around. One inspiration is the SkyLifter airship.

So imagine one had multiple of these airships, could they then coordinate the assembly of multiple parts in the air, or would this just be way too complicated? I assume one could hoist humans down in a tether to connect the parts once two airships got the parts close to each other and managed to hold them close for long enough time for humans to connect them.

Construction in air might happen via assembly like you suggest, by docking and then connecting elements together using standardized mechanical lockings (analogous to ISO container locks, but more secure) to produce a rigid frame for larger constructions. I recently made a concept video of what such a container might look like: https://vimeo.com/258318163 (This is just the rigid support frame, the full assembly would also have inflatable or solid walls, plus a lot of extra stuff that I was too lazy to model.)

One of the many problems of buoyant element assembly and docking is that when they are combined rigidly, they together form a new buoyant body, with a different center of buoyancy and center of gravity. This affects the stable orientation of the composite body, which needs to be taken into consideration. (This is not the case if the airships are only connected with long flexible tubes, but that solution has its own set of problems.)

And it also goes without saying that this kind of in-air assembly and docking needs to be practiced on Earth before trying it on another planet (one where the floor really is lava).

The density of the atmosphere at the surface of Venus is about 65kg/m³, much higher than on Earth (1.2 kg/m³). That gives airships a lot more lifting-force. Furthermore, the Venus atmosphere is mostly carbon dioxide, which has a high molar mass. That allows use of other gasses for an airship, for example nitrogen or oxygen.

An important question is of course if any work at all can be done on the surface, due to the extremely high temperature and pressure. Higher up in the atmosphere, the conditions are a little more friendly, and once leaving the ground, flying vehicles become a necessity. Given the fact that lighter than air technology has always been close to the surface, but never quite made it, here on Earth, gives airships a good chance in the more dense atmosphere of Venus. 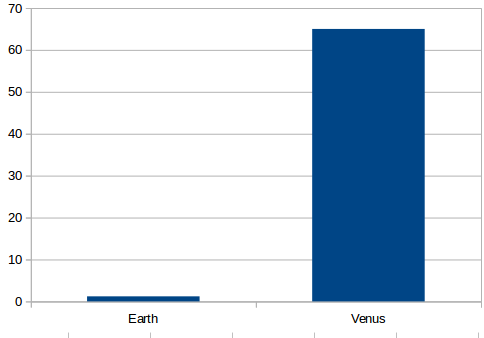 Density of the Earth's and Venus' atmospheres in kg/m³

Not the answer you're looking for? Browse other questions tagged venus construction or ask your own question.

13
Does Mars contain materials that could be used to build a space colony?
8
Folding structures in space - What are the potential benefits and problems?
11
Could the ISS pressurized elements withstand a full depressurization?
2
What's required to construct a space port on the Moon or Mars?
1
What are the challenges of a large Bola style Habitat
36
Could the Saturn V actually have launched astronauts around Venus?
4
Could H₂S₂O₈ (peroxydisulfuric acid), made in the clouds of Venus, be used for making a propellant?
8
Could a fan be used to prevent overheating on a Venus bound space probe?