Why are the Trojan libration points equidistant and not mass weighted?

The locations of the collinear Lagrange points L1, L2, L3 are mass weighted, so for example Sun-Earth-L1 is only 1% of the distance to the Sun from Earth. But L4 and L5 are one AU from both the Sun and from Earth. Shouldn't Earth's gravity be negligible that far away? Are L4 and L5 another kind of phenomena than L1, L2, L3?

From Wikipedia (emphasis mine)

The reason these points are in balance is that, at L4 and L5, the distances to the two masses are equal. Accordingly, the gravitational forces from the two massive bodies are in the same ratio as the masses of the two bodies, and so the resultant force acts through the barycenter of the system; additionally, the geometry of the triangle ensures that the resultant acceleration is to the distance from the barycenter in the same ratio as for the two massive bodies. The barycenter being both the center of mass and center of rotation of the three-body system, this resultant force is exactly that required to keep the smaller body at the Lagrange point in orbital equilibrium with the other two larger bodies of system. (Indeed, the third body need not have negligible mass.) The general triangular configuration was discovered by Lagrange in work on the three-body problem.

Also from the article: 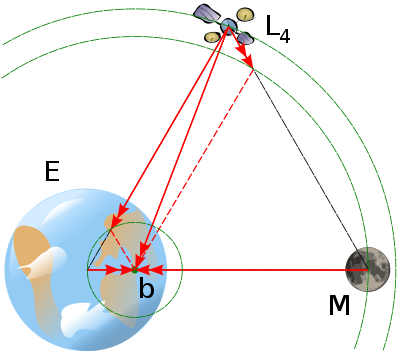 Objects at L3, L4 and L5 are orbiting the sun at very nearly but not quite exactly 1AU. They naturally orbit in about 365.25 days, would continue to do so if the Earth was zapped out of existence. Earth's gravity isn't exerting much force on them.

Okay so what's the difference? Any object at very nearly 1AU and not too close to Earth will maintain its position relative to Earth relatively well for a time span measured in decades, although over time the cumulative effects of Earth's gravity will perturb the orbit. L3 is more stable and L4 and L5 are stable infinitely for idealized 3 body.

In contrast any object with a semi-major axis around the Sun of 0.99AU or 1.01AU will normally very quickly change its position relative to Earth, being at least 2 days ahead or behind the Earth within a single year. The exception is L1 and L2 where the gravity of the Sun and Earth combine such that an object with a suitable velocity and minor station-keeping can follow an orbit synchronized with Earth's. In that sense, the L1 and L2 points are pretty special and Earth's gravity plays a much larger role in their stability.

Centrifugal acceleration is $\omega^2*r$ where $\omega$ is how fast the system's spinning and r is distance from barycenter. 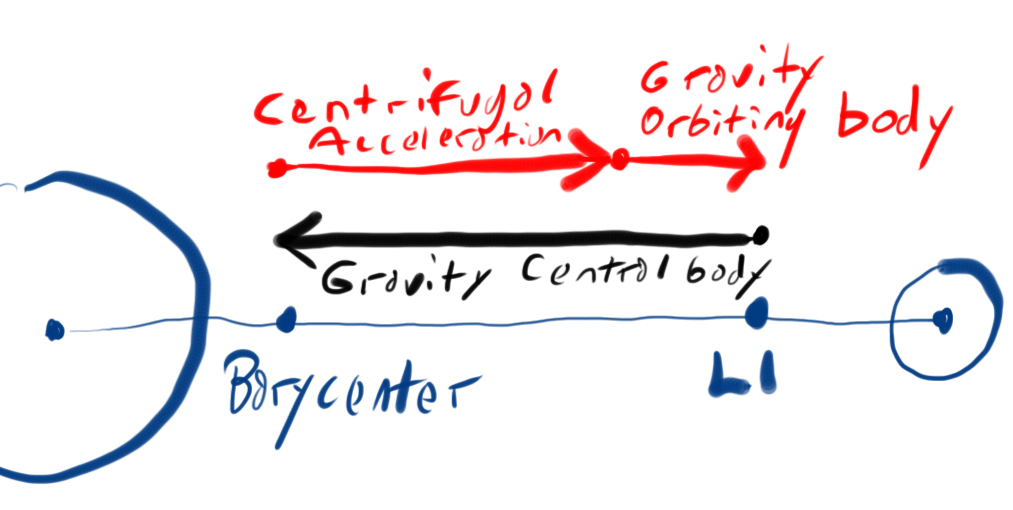 In the case of L1, centrifugal force and orbiting body gravity are on the same team. These two exactly cancel central body gravity. In this case all accelerations are parallel or anti-parallel.

At L4 and L5 none of these forces are parallel. 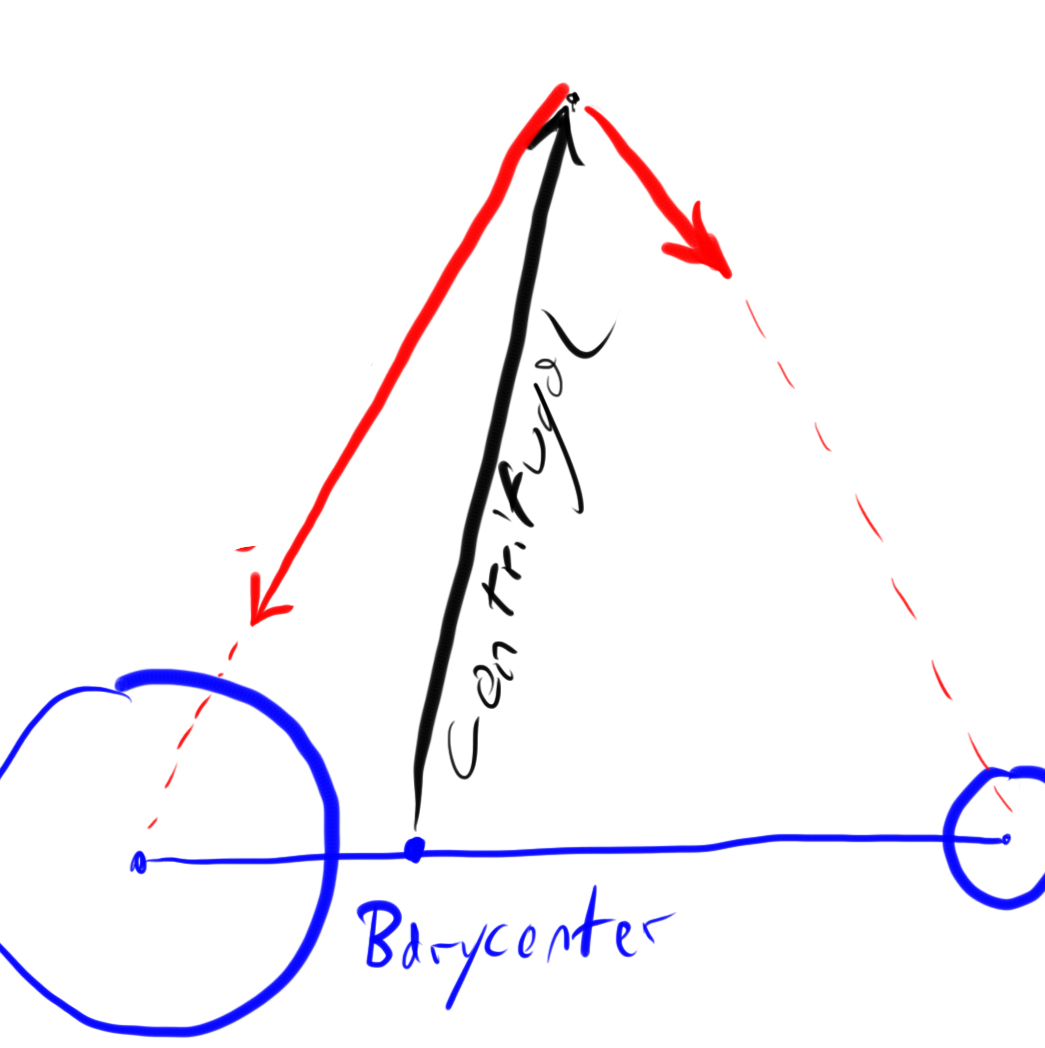 The way to add vector forces is to put the foot of one vector on the head of the other vector. The sum is a vector from from the first vector's foot to the 2nd vector's head. 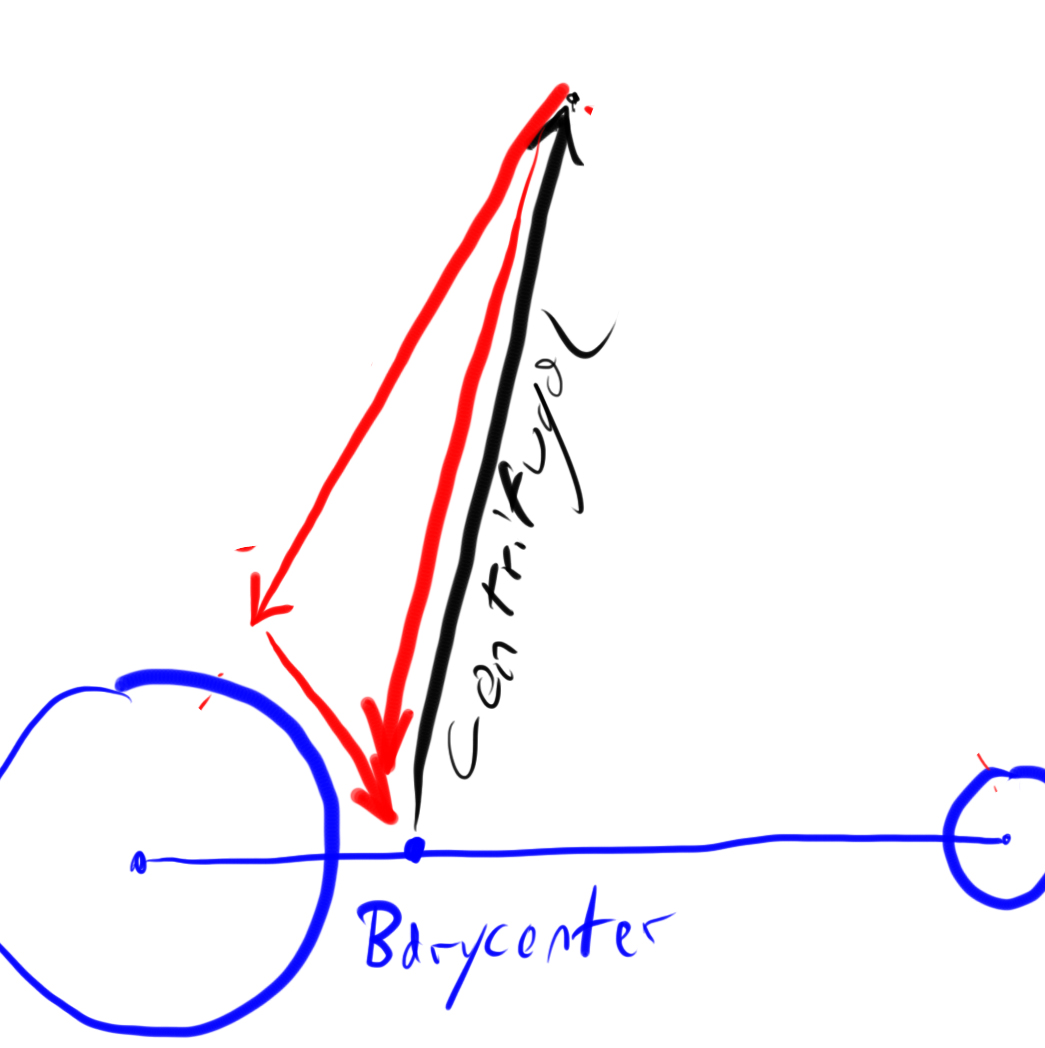 Adding the two gravities we get a vector that exactly cancels centrifugal acceleration.

If we shrink the orbiting body's mass, barycenter moves closer to center of larger body. Central body's gravity becomes more dominant and the orbiting body gravity vector gets smaller. But the two gravities still sum to cancel the $\omega^2r$ which points from barycenter to L4.

If you look at $L_4$ and $L_5$ the $y$ coordinate the general solution tells you that they lie along the vertex of an equilateral triangle with other two vertices lying at two masses. This is because the function $\pi_2$ is generally $<<1$ so $x$ becomes essentially $r_{12}/2$. Thus they are function of majorly $r_{12}$.
This unique geometric position enables the force acting on $3^{rd}$ body to pass through the barycenter, which essentially makes it motionless wrt to one of the bodies as seen from other. For better understanding you consider two bodies of comparable masses, then your barycenter position $\rightarrow r_{12}/2$ and your mass ratio $\pi_2 \rightarrow 1/2$, so your $x$ becomes zero. Based on vector diagram it is easier to see that net force will then pass through the barycenter in such case. So all points are equilibrium points and none of them have something special attached to them.

On effect of Earth gravitation at $L_4$ and $L_5$, using Newton's Law we can show that on a unit mass at those points $\dfrac{F_e}{F_s} = 0.000003003 $. This small yet significant force arising due to Earth changes the application of resultant force on unit mass to act on barycenter instead of pointing directly at the focus (the Sun center).

Not the answer you're looking for? Browse other questions tagged gravity lagrangian-points or ask your own question.

7
Do Lagrangian points apply to eccentric orbits or binary systems?
8
How does gravitational stability change with the distance from special places such as geostationary orbit and lagrange points?

17
Are Lagrange points stable over a long period of time?
19
How deep is the force well of L4 and L5 Lagrangian Points of Earth-Sun set?
8
How does gravitational stability change with the distance from special places such as geostationary orbit and lagrange points?
7
How could transfers between SEL1&2 and EML Lagrange points be utilized?
1
Why has the Earth-Sun libration point L1 been chosen over L2 for NEOCam to detect new NEOs?
3
What was the probability that Osiris Rex would find Earth Trojans?
12
How Many Martian Lagrange points are there? …And are they useful for satellites?
2
Do horseshoe orbits have anything to do with Lagrange points? Do words fail us here?
5
Are Lagrangian points associated only with the smaller body?
4
How Moon and other planets affect Earth-Sun lagrange points locations?