For a typical Shuttle mission, how much solid fuel is leftover at SRB separation?

If I understand correctly, solid booster rockets never expend literally all their fuel before jetissoning, because the burn rate slows way down in the end and it would take too long to spend it all, plus the burn rate becomes chaotic near the end.

So they separate before that happens. What I want to know is how much fuel is leftover for the average Space Shuttle mission. Either a percentage of the full fuel, or absolute value, are fine.

The SRBs are pretty close to burnout when they separate:

SRB separation is initiated when the three solid rocket motor chamber pressure transducers are processed in the redundancy management middle value select and the head- end chamber pressure of both SRBs is less than or equal to 50 psi. A backup cue is the time elapsed from booster ignition.

The separation sequence is initiated, commanding the thrust vector control actuators to the null position and putting the main propulsion system into a second-stage configuration (0.8 second from sequence initialization), which ensures the thrust of each SRB is less than 100,000 pounds. Orbiter yaw attitude is held for four seconds, and SRB thrust drops to less than 60,000 pounds.

So at separation, thrust is down to 1.8% of the initial value. Here's a graph that shows the thrust profile: 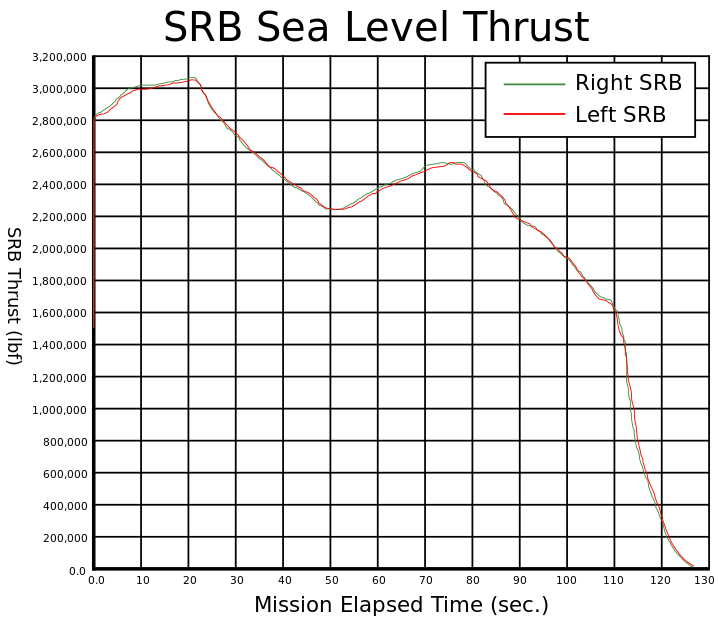 At liftoff, the entire propellant surface burns and provides thrust. The propellant is cast (mostly *) with a cone-shaped hole down the middle. At the point where the cone is widest, the layer of propellant is thinnest, and at this location the burn time is the shortest. So the SRBs will gradually reduce thrust for a while before separation.

To get a rough approximation of the amount of fuel remaining: Thrust in an SRB is related to the propellant area that's burning.
If you were to coat the inside of an empty SRB casing with a thin layer of propellant, you'd get something close to takeoff performance (3.3 million lbs thrust).
If you're down to 1.8% of nominal thrust, that means most of the casing is now bare, and about 1.8% is still covered by propellant.

I'm going to make the following assumptions:
- length of the propellant stick is 40 m
- diameter is 3.7 m
- the SRB is filled with propellant in a simple negative cone shape

These won't be very accurate figures. I've taken a number of shortcuts. I've used the length of the cone as a proxy for its internal area. I've ignored the exact shape of the propellant and just assumed a regular cone. So I might be several hundred kg off.

So the amount of propellant left at separation is 0.02% or 0.06% of what the SRB started with. Or something in between, probably.

As Russell notes in his comment, you could use more complex methods to get a more accurate answer.

note: I was unable to find a source that listed the propellant mass at separation. The above is an attempt to get to the answer from first principles.

*: yes, I know one section of the SRB is cast with a more complex pattern, but that pattern is gone a while before burnout so for this question I'll ignore it.

In this video taken by cameras on board the boosters, you can see flames coming out of the nozzles until at least 16 seconds after separation. The first 6 seconds, the flame is pretty solid but reducing rapidly, after that the flame becomes uneven.

Offered as a supplement to the other answers, here are some data about SRBs thrust profiles and operation.

Thrust of a SRB is function of the area of the solid fuel burning, as shown below:

You can find here how the space shuttle SRBs are filled:

The propellant had an 11-point star-shaped perforation in the forward motor segment and a double-truncated-cone perforation in each of the aft segments and aft closure. This configuration provided high thrust at ignition and then reduced the thrust by approximately a third 50 seconds after lift-off to avoid overstressing the vehicle during maximum dynamic pressure (Max Q).

Here is a very interesting GIF about how a SRB is built and burnt:

You can see that once the initial ignition is done you cannot stop it, and all the solid fuel will burn. This is why every space vessel using SRB will always starts its stoppable engine (SSME on NASA space shuttle, Vulcain engine on european Ariane rocket) in order to check if everything is working fine, and only after this verification unleash the power of SRBs:

The three main engines (SSMEs) started at T-6.6 seconds. The main engines ignited sequentially via the Shuttle's general purpose computers (GPCs) at 120 millisecond intervals. All three SSMEs were required to reach 90% rated thrust within three seconds, otherwise the onboard computers would initiate an RSLS abort. If all three engines indicated nominal performance by T-3 seconds, they were commanded to gimbal to liftoff configuration and the command would be issued to arm the SRBs for ignition at T-0

This is the tail end of the thrust graph given in Hobbes' answer:

I've added guidelines showing the point where thrust falls below the 60,000 lbf point, about 2.7 seconds before it hits zero.

The area under the curve there has units of lbf × seconds, which is impulse. The pic is a little fuzzy, so it's hard to tell if the arc continues smoothly all the way to zero, or if it falls off sharply at the very end. I made two different estimates, 79500 and 98050 lbf-s, one by modeling the area as a right triangle, one by modeling it as a trapezoid (base at about 14,000 lbf). (It might well be a little less, because of the concavity of the curve.)

The specific impulse of the SRBs is known - 242 seconds at sea level. Specific impulse given in seconds is actually "impulse per unit weight", so all we have to do is divide, and we get 328 to 405 lbs (149-184kg), which is very much in line with Hobbes' estimates.

This old paper gives some actual propellant mass versus time numbers for a single SRB: 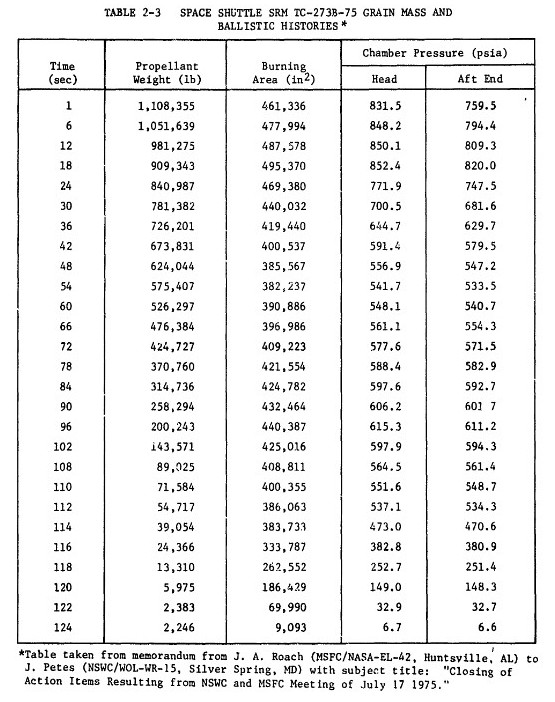 Extrapolating (ha-ha) with a power curve from the given tailoff points and a sep time of 125.5 seconds gives 1130 pounds of propellant left. Take it with 1130 pounds of salt, the actual curve looks much flatter. I would say the number is between 2200 and 1000 pounds and can't be determined any closer from this information. 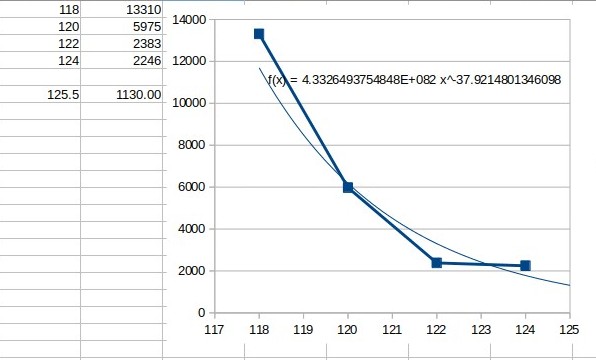 Note thrust correlates very poorly with mass remaining. It correlates much better with burning area, as you can see in these plots.

Not the answer you're looking for? Browse other questions tagged space-shuttle solid-fuel stages booster or ask your own question.

47
Could the shuttle wait out the whole burn of SRBs on launchpad in case of a problem on launch?
42
Do booster stages run out of fuel, or are they purposefully shut off?
16
Were the Space Shuttle's Main Engines ever off while the Solid Rocket Boosters were firing?
10
Why do some rockets jettison their boosters much after they are burned out?
6
Shear forces between Shuttle, tank, and boosters - what pushes what?
3
Do some solid rockets burn faster at the bottom? What's an extreme case?
0
Was the Titan SRM thrust vs time curve engineered to allow for acceleration switches to initiate staging sequence events?

19
How much fuel was used for a Space Shuttle launch?
21
Could 3D printing be used to achieve perfect grain geometry of solid and hybrid rocket motors?
14
Is it possible for the Space Shuttle Solid Rocket Boosters (SRB) to hit the Space Shuttle after jettison?
11
What ever happened to SpinSat - did it work?
7
How much did the fuel for the space shuttle missions cost?
10
Why aren't airbreathing SRBs a thing?
8
How is solid rocket fuel sourced?