Would it be feasible to use wind turbines on Venus?

It has been proposed on Earth to use airborne wind turbines, anchored to the ground and flying at high altitudes where wind is strong and consistent.

On Venus, I would immediately say that anchoring anything to the ground is a no-go. However assuming a floating cloud colony, a wind turbine would be attached to a several km long cable and dangled below. This would exploit the differential in wind speeds between the colony and turbine to drag the turbine through the air and generate electricity.

The primary reason to consider such an option is that it would provide an energy source independent from sunlight, generating energy continuously including at night and under dense cloud cover.

In general, the wind gradient is such that as the height above the ground increases, the wind speed also increases. It is true for Venus also. However, the gradient slope is heavy there. 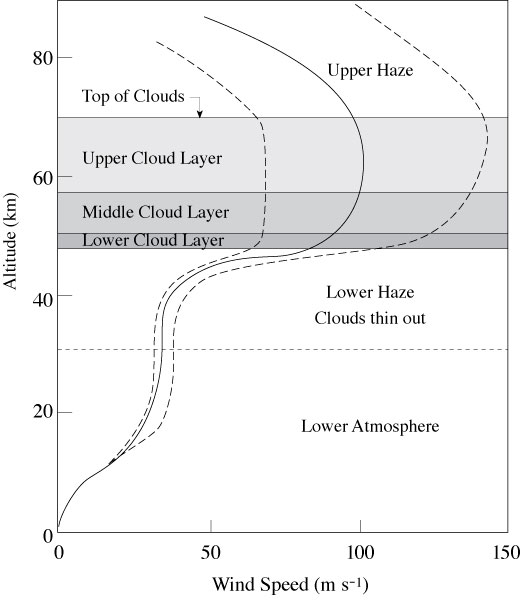 In case of Venus, any floating cloud colony would have to be above the sulphuric acid clouds if it has to have any chance of survival. So, basically the colony would experience as much or more winds compared to the dangling turbine.

Also, as one goes down the atmosphere, the pressure and density increases much more than earth. This would, in turn require the turbine to be smaller (for less drag) and sturdier (to overcome the pressure, to say nothing about the sulphuric acid).

One of the main advantages of having floating turbines in earth is that they can be of large sizes and are exposed to high speed winds at altitude. However, both these advantages are lost in case of Venus. So, it will be highly impracticable for using airborne wind turbines on Venus.

Not the answer you're looking for? Browse other questions tagged colonization venus energy or ask your own question.

18
Would geothermal energy be practical on a lunar base?
11
Would a human colony on Venus be possible?
20
Would terraforming Venus destroy its ionosphere?
7
How efficient would it be for an outpost to use human-powered vehicles?
24
How does Venus' thick atmosphere survive against the solar wind?
4
How would people measure time on Venus?
8
Would it be feasible to use natural light to grow plants on Mars?
4
What is the atmospheric composition of Venus at the 34 mile (50 km) altitude of the proposed HAVOC program?