How full is the geostationary belt? 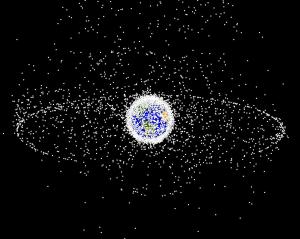 The geostationary ring clearly seen in the above picture looks alarmingly crowded. How full is it? How much space does a satellite in that orbit require to operate safely? Surely, (other) geosynchronous orbits will also need to be taken into account.

Do countries have to reserve or announce positions prior to launch?

Jonathan McDowell's geostationary orbit catalog lists 1349 objects. The criteria for inclusion in this list is only that the period is between 23 and 25 hours (inclination is not a factor). It is worth noting that while a geostationary orbit is typically defined as circular, uninclined, and having a period equal to one sidereal day, actual satellites are only maintained near this, as the unequal mass distribution of the Earth (specifically the tesseral harmonics) will perturb the satellite East/West, and the Sun and the Moon perturb it North/South. "Near", here, is very flexible, but inclinations below 3-5 degrees and a mean altitude of +/- 50-75 km from GEO is common.

How "crowded" it is depends on the location you're looking at, as the distribution in longitude is not at all uniform. For instance, there will tend to be fewer satellites over the open Pacific than the Americas or Europe. As mentioned in geoffc's answer, the International Telecommunication Union (ITU) does indeed assign orbital slots, but how that occurs or even the size of these slots is complicated enough that there is no "typical" answer (but think on the order of tenths of a degree of East/West longitude).

An additional complicating factor is that operators may share slots with either other spacecraft that they own or spacecraft from other operators. In this case, the stationkeeping maneuvers alluded to above must be tightly coordinated.

Unlike the LEO environment, GEO is a single, well-defined orbit regime, and most countries and operators understand the need to be responsible with it. As such, when a satellite nears retirement, it usually raises its orbit to the GEO graveyard, which is (roughly) a circular orbit several hundred km above GEO (the IADC has guidelines which are discussed on the linked page). This does a lot to keep the amount of debris/dead satellites out of the GEO ring.

The International Telecommunication Union allocates orbital slots, generally for Geosync. So yes, countries do have to reserve slots. Specifically, the Radiocommunication Sector (ITU-R) division of the ITU is responsible for orbital slot allocations.

A broadcast or communications satellite needs to be properly spaced to avoid frequency interference/overlap. But a weather satellite, or earth observation satellite might not interfere and could coexist.

There is a ton of great detail on the Wikipedia page for Geosync orbit.