Could waste methane be recycled as propellant on the ISS?

Under standard condition methane burns with oxygen in stoichiometric ratio of 1:2 to liberate 891 kJ/mol of energy. Why is the ISS not making use of the methane, which is expelled as waste instead? Why couldn't it be mixed with oxygen and this mixture used as fuel for reboosting, and reduce the amount of fuel that needs to be delivered to the ISS by rockets?

What are the practical problems in implementing methane as a propellant?

There are a few studies at NASA (and I don't doubt, under the auspices of RKA and ESA) that bring up designs for tying Sabatier and liquefaction equipment that potentially can be used in LEO and elsewhere:

AES funding will be used primarily to develop the experiment package that will include interfaces with the ISS power, data, cooling and GH 2 sources, the GH 2 liquefaction heat exchangers and J-T valves, the cryogenic refrigerator (20 W at 20 K and 40W at 90K), the cryogenic fluid management payload (mixing pump, spray bar, liquid acquisition device) , a small (<200 liter) liquid hydrogen tank, and the passive thermal control systems. The demonstration project will be a collaboration between multiple NASA centers, including Kennedy Space Center (KSC), Johnson Space Center (JSC), Glenn Research Center (GRC), and Goddard Space Flight Center (GSFC). As envisioned, KSC will responsible for the design and fabrication of the experiment pallet, the passive thermal control system, the fluid components, and the pallet integration and systems engineering; JSC will be responsible for integration of the pallet to the ISS, the command and control system, and the orbital test operations; GRC will be responsible for design, fabrication and integrating of the CFM components into the storage tank and the system modeling; and GSFC will be responsible for the development of the 20W at 20K cryogenic refrigerator. 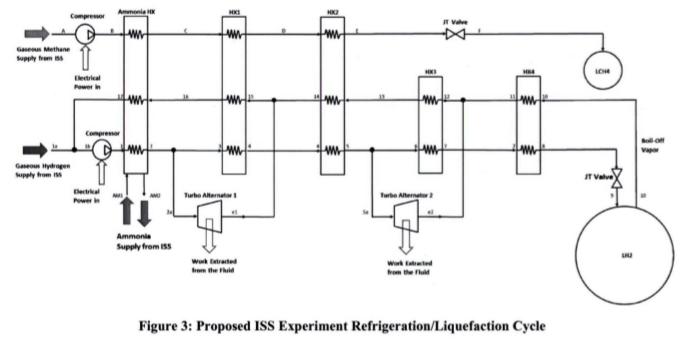 Why hasn't this been done before?

The simplest answer is that you need a bunch of liquefying machinery (or compressors) to transform methane into usable state, and that machinery was not fitted into the original Russian modules (which do the thrusting).

Another consideration is that storable hypergolic propellants are much more studied at the time.

Methane-oxygen engines are very much in vogue nowadays, with Mars exploration and "clean" rocketry, but that was not always the case.

A related question: Why does the International Space Station produce so much methane?

Besides... hypergolics (which I assume the ISS uses) don't require an ignition system to initiate combustion (just open or close a valve), making the thrusters simpler and more reliable than any fuel+oxygen system.

Not the answer you're looking for? Browse other questions tagged iss fuel waste isru or ask your own question.

45
Why does the International Space Station produce so much methane?

10
What happens to waste on the ISS?
14
What is so difficult about the ISS zero propellant maneuver?
46
Why vent $CO_2$ and $H_2$ waste products to space on ISS?
5
How does methane waste produced by the ISS interact with our Atmosphere?
2
Are there any photographs of the frozen waste water after a urine dump in space?
22
What were the "pills" that were added to solid waste in Apollo 7?
5
Where, physically speaking, are CO2, Hydrogen and Methane ventilated on the ISS
7
Sabatier reaction oxygen to methane ratio for Mars ascent propellant
7
Is the silica gel used in the ISS recycled?