When was the last time 9 people were on the ISS?

Currently (September 4, 2015) there is a complement of 9 people aboard the ISS. This will change a week from now, when 3 of those people return to Earth.

When was the last time the ISS had 9 people on board, if ever? It seems over the last few years it has been much more common for 3 or 6 people to be on board.

And why are there 9 people on board now? Based on the recently crew history of the ISS, this seems a bit exceptional. My guess is that it is related to the year-long mission of Scott Kelly and Mikhail Kornienko, whereas typical ISS missions last about 6 months.

Last time the station briefly hosted 9 astronauts before today's (September 4 2015) One-Week Handover, was on November 2013 (for 3 days, Nov. 7 - Nov. 10) before the 2014 Sochi Winter Games when the Olympic Torch was in space for the first time in history. Before that, without involving publicity stunts, the final flight of the Space Shuttle, STS-135 (Atlantis) carried a crew of four, which joined on 10 July 2011 the Expedition 28 crew of 6 on station for a total of 10.

During final assembly of the station and before Space Shuttle fleet retirement in 2011, the station often hosted 9 or more crew at the same time. For example, the final mission of the Space Shuttle Endeavour, flight STS-134, delivered a crew of 6 joining on 18 May 2011 first the complete Expedition 27 crew of six for the total of 12 crew members on the station, before the Soyuz TMA-20 departed on May 23 with thee Expedition 27/28 crew members, for a total on station of 9.

That was dubbed in the media as space traffic jam and it had some interesting side effects, like not all of the crew on the station being able to also sleep on it. But it actually wasn't the first. I think that the record was 13 with STS-131 (Discovery) crew of 7 joining another crew of 6 on 7 April 2010 for a total of 13 (as shown in this picture): 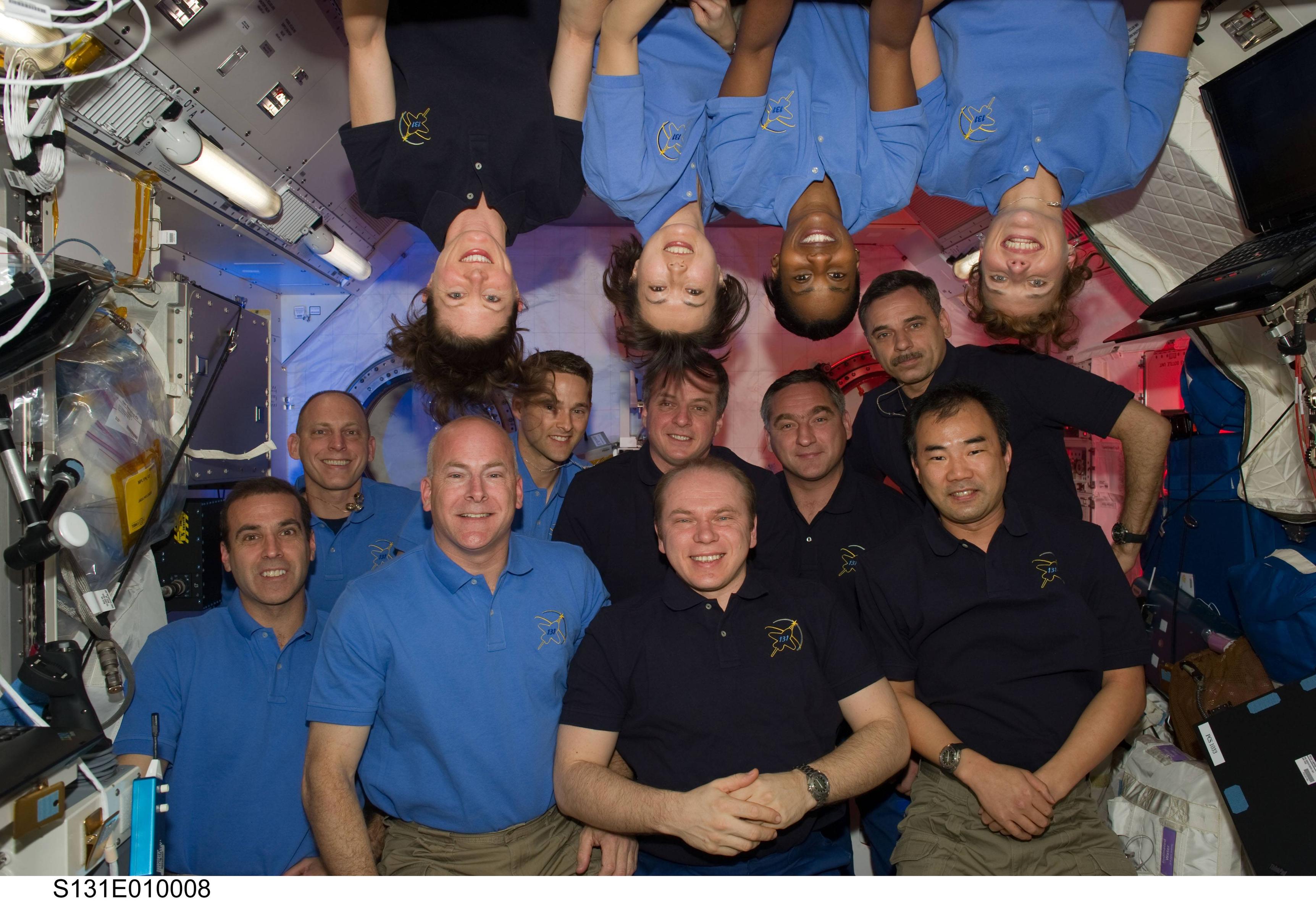 STS-131 and Expedition 23 crew members gather for a group portrait in the Kibo laboratory of the International Space Station while space shuttle Discovery remains docked with the station. Image credit: NASA

The last time nine people were on board the ISS was in November 2013. Here's a photo of the crew of nine on the official flickr feed.

NASA states explicitly in a recent blog that the last time nine people were on board the ISS was in 2013, and I subsequently looked at the individual mission descriptions to infer it was in November 2013, when a brief overlap between expedition 37 and expedition 38 (unofficially dubbed "expedition 37.5") brought the Olympic torch into space for the 2014 Olympic Winter Games.

I couldn't find a simple "ISS occupancy timeline" online but found a great blog with details.

Your question made me curious about what the process looks like when the crew goes from six to nine and I found an interesting interview with Luca Parmitano during the last nine person stay on the ISS detailing how the logistics worked out in hat particular case (spoiler alert: the old crew called dibs on the sleeping stations and the new guys were left to make do with temporary arrangements...)

15
Does having only 3 people on the ISS create workload problems?

32
Will the ISS need more docking ports?
9
What would happened if the ISS was depressurized while astronauts were sheltering?
9
How much crew time is required for visiting craft, at the ISS?
7
Will Soyuz TMA-16M have the most experienced crew?
4
Lowest amount of people on the ISS at one time
26
How many times were there thirteen people inside the ISS? Is it hard on the station?
4
How many people could the ISS support?
9
When might we get fourteen people in space?
4
What caused the ISS Two Line Element Day of Year problem beginning 12-24-2019?