Here is the Cargo Dragon: 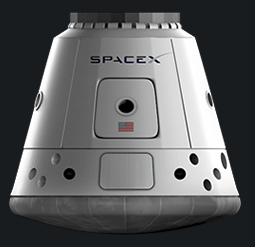 And here is the Orion: 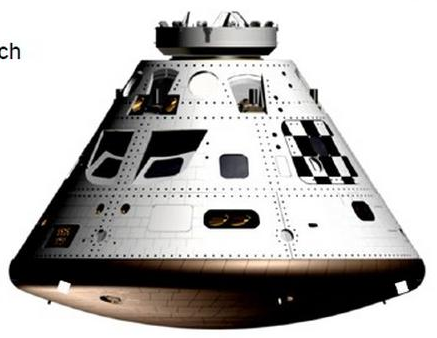 The "cone" that orion makes has a large opening angle - perhaps about 70 degrees. Meanwhile, the Dragon is almost cylindrical - the opening angle is about 20 degrees I would say.

What is the reason for these vastly different "cones"? I would have thought an optimal "cone" exists for minimal aerodynamic drag, or minimum thermal heating on reentry for example. What would a chain of decisions be like that would produce the very different geometries (as in the above example of Dragon vs. Orion).

Thank you for your insight! 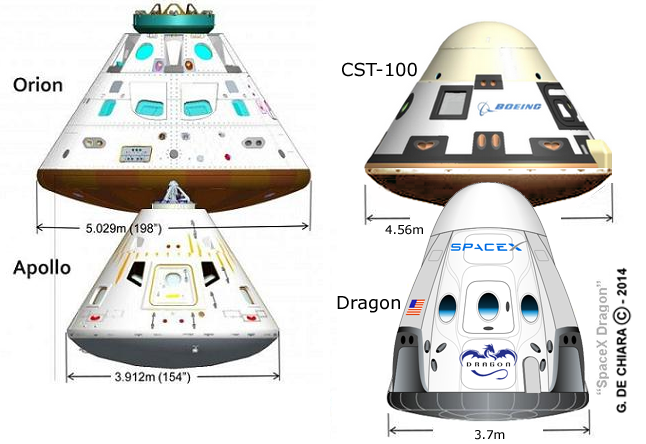 As usual in this sort of thing, there's no single optimal answer because the capsule has to do a few different things, so the shape has to balance different requirements.

I believe the stubby cone of Apollo/Orion/CST provides good passive aerodynamic stability in the reentry; Dragon is closer to the "biconic" shape, which might offer more lift on reentry (thus potentially a shallower entry with lower G-load for the crew). Wikipedia has some info on shapes for re-entry vehicles.

This is such an expansive question that it is difficult to answer without writing an entire essay. The answer comes down to the systems engineering process and the mission requirements. As in all spaceflight missions, the payload needs to be protected, especially when a human is the payload. The shape will largely be derived from payload, aside from its passengers, the materials, and entry trajectory (including velocity, etc.). Once you know the 'ballpark' for your entry corridor as determined by your mission, then you can modify your trajectory or even your vehicle design. Depending on your mission you might have to make major changes to the design and in some cases you may need to change your flight plan. There is a very specific re-entry corridor for each craft. Too little drag results in overshoot and too much causes your spacecraft to undershoot.

So now that we know the process of arriving at the vehicle shape (very broadly), we can talk about why they are shaped differently. This all comes down to the vehicles ballistic coefficient (BC), which determines the amount of lift. A blunted cone vehicle will generally have a lower BC than a regular cone. The BC will also affect heat, shockwave, rate of deceleration, and a few other aspects of re-entry. Shape will also affect accuracy. The less time spent up in the air, means the less chance that your vehicle will be off target.

There is no single, magical solution to the shape of a spacecraft. The "cone angles" are a direct result of the mission and its requirements.

If you are interested in reading a more detailed explanation there is a book that lightly covers many aspects of space exploration. It is titled Understanding Space, 4th edition, by Sellers, Astore, Giffen, and Larson.

Hicks' text on reentry provides a really good look at the derivations of the reentry problem, and touches on the impacts of top-level design choices. For example, although dependent on the actual entry profile, total heat transfer often has the following form: \begin{equation} \bar{Q}_{f} \approx \left(\frac{c_{f}A}{C_{D}S}\right)f(V,\vec{p}) \end{equation} where $c_{f}$ is the surface/skin friction, $A$ is the total surface area of the vehicle, $C_{D}$ is the drag coefficient, $S$ is the wetted area, and $f(V,\vec{p})$ indicates a nonlinear function of velocity and other vehicle and environmental parameters $\vec{p}$. If examining heat flux in a vacuum, one would see that heat transfer is minimized for smaller values of surface friction and wetted area, or increase the drag quantity $C_{D}S$. This is the equivalent of saying a blunt vehicle minimizes the total heat absorbed.

But there's a catch. To demonstrate, consider tne form of the maximum deceleration in terms of kinetic energy $T$ for a shallow gliding entry profile: \begin{equation} \frac{a_{decel}}{g_{0}} = \frac{1-2T}{\frac{C_{L}}{C_{D}}} \end{equation} where $a_{decel}$ is the deceleration, $g_{0}$ is a reference gravitational value used to normalize, and $C_{L}$ is a lift coefficient. We saw above that a higher drag quantity minimizes heat flux, but now we see that higher drag coefficients increase the deceleration, which increases the loading on the vehicle.

The cone angle and the bluntness / sharpness of the nose are all design choices that attempt to optimize some design space for a particular mission profile while also meeting a given cost, schedule, and performance. And based on these two simple relations, we already see that it's a very complicated process. Hicks' text reference above is a great introduction to the subject, and most intro to orbital dynamics texts will give the topic some attention as well.

The target lift-to-drag ratio (L/D) also plays an important role. A high L/D provides greater aerodynamic control authority during hypersonic entry, providing engineers with greater flexibility in terms of controlling the maximum heating rate and maximum g-load, as well as achieving cross range and targeting objectives. Early in the Apollo Program, the capsule designers were targeting L/D ratios as high as 0.5, which requires a significant angle of attack. Thus the sidewall angle of the Apollo capsule was set at roughly 32.5 degrees to minimize direct flow impingement and the associated heating effects on the sidewall, which would impact the thermal protection system (TPS) design and materials. As the Apollo capsule design evolved, engineers found it difficult to achieve the target L/D because it requires a substantial offset to the center of gravity (cg) to achieve the required angle of attack (AoA). In addition, a low cg (closer to the base heat shield) improves aerodynamic stability, but a greater lateral offset is required to achieve the same AoA. This conflicts with the fact that, as designers pack more and more equipment into a capsule, the cg tends to converge toward the centerline. Ballast can be used to influence the cg location, but every extra kilogram in the Apollo capsule flowed through and impacted the mass of the Service Module and the ability of the Saturn V rocket to inject the CSM into the trans-lunar trajectory. In the end, the capsule design represents a compromise across many factors including internal volume/dimensions, ballistic coefficient, L/D, TPS materials and thicknesses, etc. The Apollo capsule ended up flying at a L/D of ~0.32.

The Soyuz capsule, in contrast, has a very shallow sidewall (I seem to recall a value of 7.5 degrees). Its more cylindrical shape provides greater volume for a given base diameter. But it is also flown at a lower angle of attack, achieving an L/D in the range of 0.18 or so. The Soyuz capsule provides excellent stability, but pulls fairly high g-loads and has limited control. But it is a very efficient design, as well, and has proven itself over a large number of missions.

This is a very brief and simplistic treatment of the topic. As noted in other posts, the launch environment and abort scenarios introduce their own design influences to a crew capsule, as does the landing scenario (e.g., land versus water). If you enjoy this type of intellectual exercise, then you might want to consider a career in aerospace engineering.

Not the answer you're looking for? Browse other questions tagged spacex spacecraft dragon orion-spacecraft aerodynamics or ask your own question.

16
Why will the BFS reenter broadside rather than engine first?
16
Why did the cones of the Mercury and Gemini capsules have a neck?
6
The aerodynamic stability of the truncated cone shape
-4
Boeing starliner launch vehicle

5
Have any other capsules used a movable ballast system for control?
10
Why space probes are so different from each other?
11
Why not jettison the nose-cone from Falcon Heavy side boosters for better control authority?
16
Was SpaceX's launch of Formosat-5 more vertical than normal for any particular reason?
8
Would an autogyro be a good solution for a space re-entry vehicle?
5
Why was the nose cone on the Space Shuttle's external tank pointy?
2
Dragon launch escape: is nose cone ejected for parachute deployment?