The Apollo spacecraft, launched by Saturn V, the most powerful rocket ever build, could only take 3 man to the Moon. But how can SpaceX's Falcon Heavy, second to Saturn, take seven crew to Mars on a single Dragon V2?

The Falcon Heavy cannot send humans to Mars in a single launch and probably won't ever send humans to Mars in any mission scenario. I believe the source of your confusion stems from the recent postings of Elon Musk on instagram. These 5 images depict the EDL of a Crew Dragon in a mission known as Red Dragon. Red Dragon is a mission architecture developed by NASA(not SpaceX) in which a Dragon capsule is sent to Mars as a large lander. Since Crew Dragon has 8 SuperDraco thrusters and a robust heatshield designed for Mars, it could land on Mars with a sizable payload if the fuel supply was increased.

Anyways your main question is why can Crew Dragon plus Falcon 9/Falcon Heavy seat 7 when Apollo plus Saturn V only sat 3. The answer is that the capsules were designed for different roles, different destinations, and in two different time periods. Crew Dragon is a LEO Taxi. It is designed to be fully automated and take people to and from the ISS. It has the internal cargo to seat 7 but will most likely fly with 4 astronauts and cargo.

Apollo is the crew module for a lunar mission. Its service module contains the consumables and propulsion equipment necessary to go to the Moon. The mission plan called for 3 astronauts so it was designed with 3 seats. There was actually a plan to have a 5 person Apollo capsule in order to rescue a stranded Skylab crew. 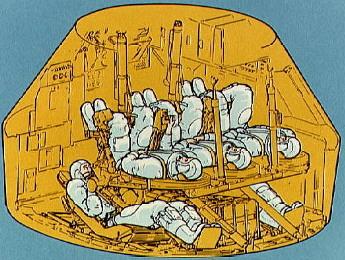 Not the answer you're looking for? Browse other questions tagged mars spacex dragon-v2 falcon-heavy or ask your own question.

23
Is the SLS irrelevant if the Falcon Heavy launch is successful this year?
8
How will the Falcon 9 carry the lunar xprize rovers to the moon?
9
Is it possible the Falcon Heavy Demo flight could be done with three previously flown boosters?
8
Is it probable the Red Dragon will successfully land on Mars on the first try?
18
What would the challenges be in developing a Falcon Heavy with three or four strap-on boosters?
8
How long would a Falcon Heavy last in orbit around Mars before degrading?
7
How much payload can Falcon Heavy Reusable lift?
6
Do Falcon 9/Heavy Block 5 boosters need landing legs? Or can they land back on their launch mounts?
1
What is the maxium weight the falcon heavy can take to mars
4
What is the closest distance SpaceX's Tesla Roadster (Starman) will ever be to Mars?