How has the angular velocity of Earth changed over the past 100 years?

What is the total change in the Earth's Angular Velocity over the past 100 years? I have read other posts that discuss how much mass has been lifted out of Earth's Atmosphere. I'm trying to get an idea of the effect of all of our launches on the angular momentum of the Earth. It would depend not only on the mass of all launches but the weighted-radial separation from the Earth, of all launches, that will ultimately determine the net change in angular velocity. This should be something that can be looked up as it should have been accounted for early in our space exploration history.

Spacecraft launches are not AFAIK the main reason for changes in Earth's angular rate and angular momentum.

Regarding the angular velocity, you can check DUT1, which is defined by Wikipedia as follows:

The plot provided by Wikipedia for the evolution of DUT1 is: 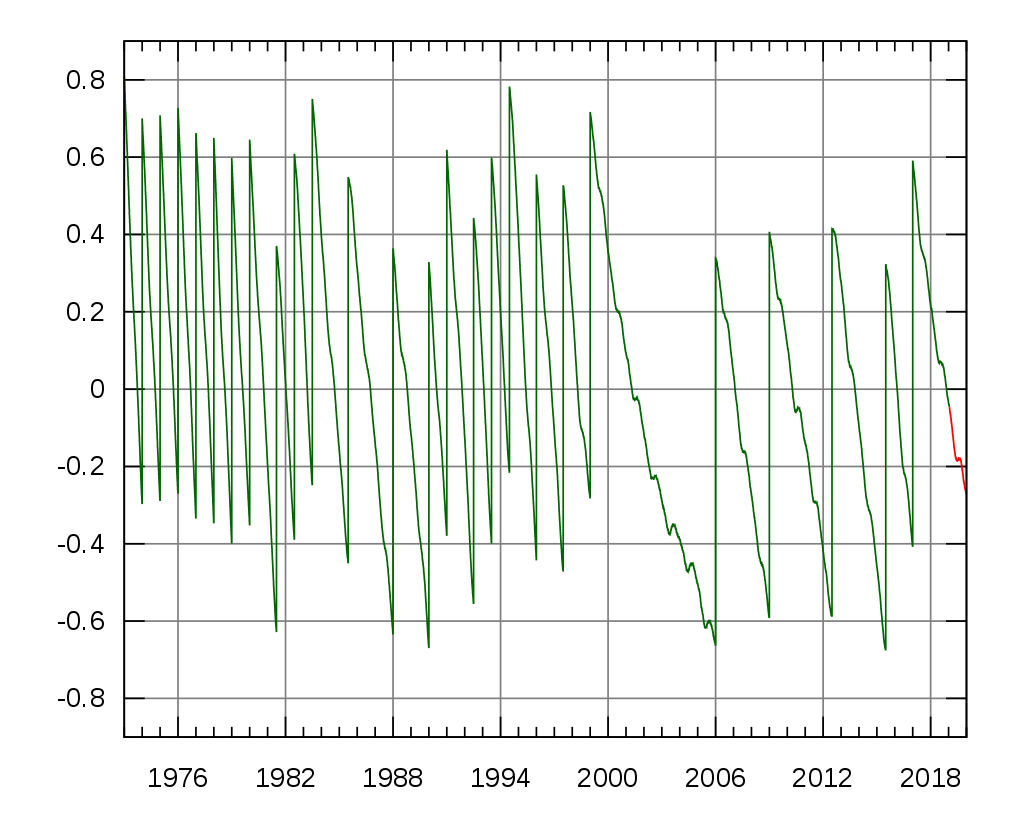 The slope of DUT1 is basically the deviation of the Earth's angular velocity with respect to it's nominal value. The graph is not continuous though, because of the addition of Leap Seconds.

Another parameter that might provide you more directly with what you need, is the (excess) Length of Day (LOD)

The variations in LOD can be split into several components, according to their causes. The total variation is shown in the upper part of the figure, without oscillations induced by the tides of the solid Earth and oceans, are shown separately for the long and short periods. The dynamical influence of the liquid core of the earth and climatic variations in the atmosphere account for slow variations (trend in the upper part of the figure). The rest of the atmospheric excitation can be split into a seasonal oscillation and residual oscillation, which includes 50-day oscillations as well as large anomalies like the one associated with the 1983 El Niño event. Yearly values of LOD since 1623 are available.

Not the answer you're looking for? Browse other questions tagged launch artificial-satellite earth rotation or ask your own question.

1
How are satellites, rocket launches and other space programs affecting the earth’s rotation? How will it be affecting living beings?

5
Why do gps satellites rotate over the Earth
14
Why does the Earth lose rotational velocity in the vacuum of space?
5
Earth angular size looking from the ISS
8
In "spacecraft talk" is nadir just a fancy word for "down"?
3
Why does a spacecraft have angular velocity relative to Earth?
12
Is it possible to get a spacecraft into earth orbit using Linear Eddy Current Braking on an orbital runway?
7
How has the brightness of SpaceX's Starlink constellation changed since May?
1
How much of the total angular momentum of the Earth-Moon system is due to the Moon?