How important is the size of an astronaut?

It seems to me that weight and size would be important in choosing spacefarers for many reasons; I came across this Wikipedia article where the Chinese astronauts (taikonauts) have to be between 50 and 70 kg, which makes sense to me, but other countries don't seem to stipulate a size requirement.

I would think that it would be easier and cheaper to get the person into space if they weigh less, and could survive on less food for a given time frame so you also save on the provisions.

Cramped conditions would be less of a problem.

All else being equal, is there any reason why sending bigger people into space would be an advantage?

In the early days of crewed space exploration, size and weight of crew was an issue. The original batch of Soviet cosmonauts selected were restricted to 1.75m height and 72kg mass, for example, and US astronauts to 1.80m and 82kg.

As launchers got bigger and spacecraft got more complex (and roomier), these restrictions became less important because the crew represented a progressively smaller share of the mass budget.

For example, in the Mercury program, the astronaut's mass was ~5.8% of the spacecraft mass; in Gemini, the crew was ~4.3%; in Apollo earth-orbit configurations, ~1.2%.

At some point in that progression, it makes sense to start relaxing the astronaut height/mass restrictions. China's space program simply hasn't advanced far enough for them to do so yet.

As for inherent advantages of a larger crew member, all other things being equal, larger people in good health are generally stronger, which can be important during certain EVA operations. In most other criteria a smaller crew member would probably be very slightly preferable primarily due to resource consumption rates.

Not a complete answer, but Shuttle height restrictions reflected the initial requirements of not restricting most of the US population and were generous: minimum of 4 ft 10 1/2 inches for mission specialists, 5 ft 4 inches for pilots and commanders, maximum of 6 ft 4 inches.

This is quite a wide range, as this picture from STS-86 indicates. Russian requirements were not so generous and this fact caused issues for this crew (it was a mission to Mir). 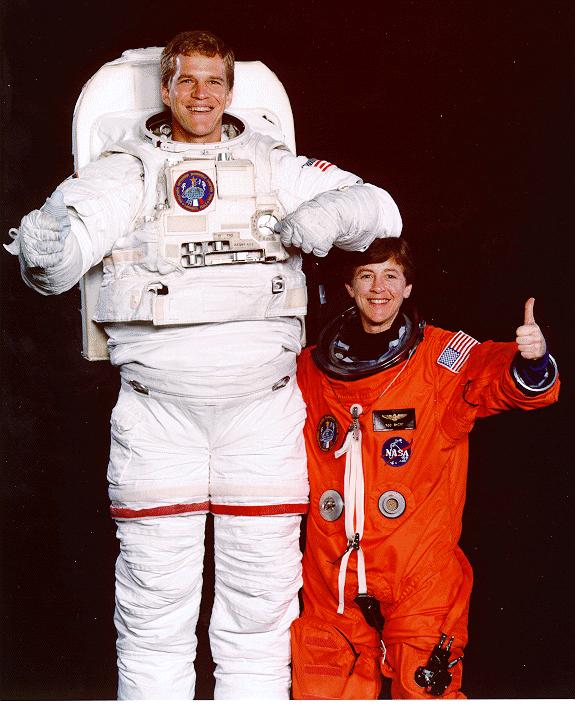 Not the answer you're looking for? Browse other questions tagged astronauts medical or ask your own question.

24
What medical conditions can impede someone from going into space?
20
Size of Apollo era astronauts
8
Does a persons weight effect their potential selection to be an astronaut?

20
Size of Apollo era astronauts
3
Won't an astronaut exposed to the vacuum of space bleed from everywhere?
12
How much does it cost to train an astronaut?
2
Did astronaut candidates have a lung capacity test, as portrayed in the movie The Right Stuff?
2
How to become an astronaut?
8
Astronaut distance from Earth?
7
What protocol is in place if an astronaut kills another astronaut in or around the ISS?
2
How was the deep blue colour of these astronaut “jump suits” selected?
4
Is retired astronaut Scott Kelly now the same height as his brother?