Have any of the rovers ever recorded a solar eclipse on Mars?

I've heard a rumor that Curiosity rover sent a recording about Phobos covering the Sun on the Martian sky. Did it happen? If yes, how frequently could such things be recorded?

No, because Mars can't have eclipses. Strictly speaking, Mars has only transits. The difference is that Mars's moons are smaller than the Sun as viewed from Mars, thus they don't block out the entire sun. Eclipses are defined as only occurring if the entire sun is blocked, or at least the vast majority. Phobos blocks out only about 60% of the sun at most. This could arguably be called a partial solar eclipse (But definitions are fluid, so...)

And yes, there have been several transits viewed by the rovers Curiosity and Opportunity and photographed. Here's pictures of some of them. 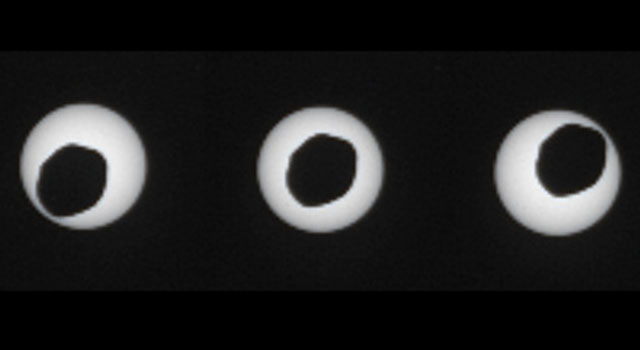 15
Are data we get from surface rovers accurate?
31
Who took the Curiosity rover's self-portrait photo from the surface of Mars?
9
The types of motors used on the Martian rovers?
5
Is Martian wind strong enough to produce aerodynamic forces on a spacecraft?
20
Curiosity is still dirty! How will the ExoMARS Rover keep its solar panels dust-free and collecting sufficient power?
9
How do the Mars rovers sleep through the night on Mars?
13
Do Mars rovers protect optical windows during dust storms? Do they "avert their eyes" or do they just "grin and bear it"?
2
Why did Perseverance have cameras to record the sky crane operations?
8
Sending Mars rover to the Moon
4
Plot of the thermally-induced tilt in Martian surface during solar eclipse by Phobos? (slope of 1 atom per meter?)