What are the “unpleasant effects” of having a cold in microgravity?

I went to Technik Museum Speyer's space exhibition, which presented an excellent overview of the Apollo missions in a series of posters. The poster describing the Apollo 7 mission (an Earth orbit test flight) contains the following interesting detail:

Only the crew was suffering some tension because [Walter] Schirra developed a cold at an early stage and passed it on to both his crewmates. In the weightlessnes of space, a cold has unpleasant side effects.

No further explanation is given, but I'm curious: Why is having a cold in weightlessness especially unpleasant?

For reference and completeness, here is the relevant section of the poster. I digitally highlighted the above quote in yellow. The German text on the left says the same. 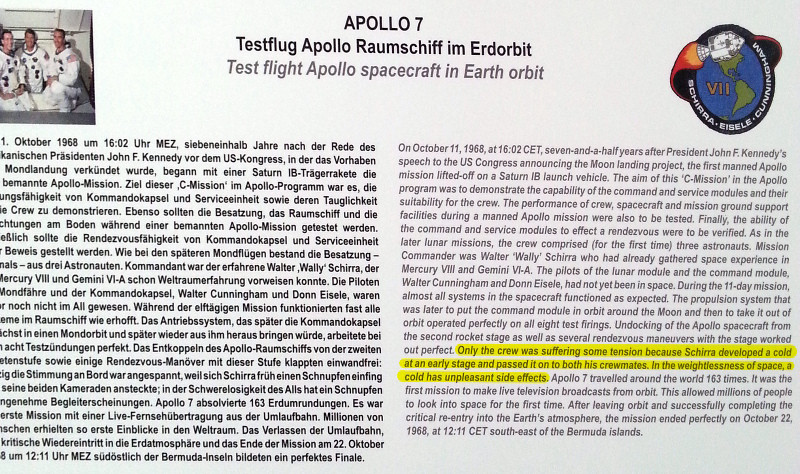 This description of the Apollo 7 mission from NASA contains a more detailed description:

Mucus accumulates, fills the nasal passages and does not drain from the head. The only relief is to blow hard, which is painful to the ear drums. So the crew of Apollo 7 whirled through space suffering from stopped-up ears and noses. They took aspirin and decongestant tablets, and discussed their symptoms with doctors.

In contrast, gravity on Earth drains nasal mucus out through the nose (where it can be wiped off) or into the lungs (from where it can be coughed up, then swallowed). These processes do not put pressure on the ears.

The piece even suggests that blockage of the ears could cause dangerous levels of pressure during re-entry:

Several days before the mission ended, they began to worry about wearing their suit helmets during re-entry, which would prevent them from blowing their noses. The buildup of pressure might burst their eardrums. Deke Slayton in mission control tried to persuade them to wear the helmets anyway, but Schirra was adamant. They each took a decongestant pill about an hour before re-entry and made it through the acceleration zone without any problems with their ears.

Related: Astronauts in microgravity often experience space sickness and other related conditions already, and the fluid not draining from one's head has been described as feeling like "a constant head cold". I'd speculate that the discomfort from an additional actual cold could cumulate with that in a non-linear way.

Not the answer you're looking for? Browse other questions tagged crewed-spaceflight apollo-program microgravity astronauts health or ask your own question.

31
How is the ISS equipped to deal with the outbreak of a contagion?
14
Do the majority of astronauts experience space sickness while adapting to micro-gravitational conditions?
8
How often do astronauts suffer headaches, migraines, etc. in microgravity?