Do the propellant tanks of actual (not planned) expendable vehicles' upper stages have relief valves?

This question was inspired by the answer to this question. The answer, in part, states that overpressurization of propellant tanks is a cause of upper stage explosions, leading to orbital debris.

The only propellant tanks I am familiar with, those in the STS External Tank, had relief valves that would pop open if the the tank pressure reached a certain value.

After reading about the suspected cause of the latest Falcon 9 anomaly, I assumed that the second stage relief valve was undersized for the rupture of a helium sphere - a design error. But perhaps there was no relief valve at all?

Since Centaur Upper Stage has a long flight history*, and it did experience hydrogen-venting problems in its early versions resulting in several modifications to its pressurization system, I was fairly certain that it ought to have several relief valves in place;

The Centaur liquid hydrogen and liquid oxygen propellants are contained in thin-wall, pressure-stabilized tanks. Pressures in each tank are maintained by propellant boiloff. Vent valves are used to control pressure levels during tanking and flight. All of the vent valves are of the same design, differing only in pressure setting. A solenoid in each valve may be energized to place the valve into a shutoff mode to preclude venting.

The liquid oxygen vent system is mounted on the aft bulkhead and consists of one vent valve, insulated ducting, and a vent disconnect. This system is shown in Figure 7. Venting on the launch pad occurs through the disconnect and a duct which penetrates the interstage adapter. After separation from the Titan booster, venting will occur overboard through the ducting. The ducting is aft canted, and adjustable (prior to launch) such that the thrust from the vented gas is directed through the vehicle center-of-gravity. This orientation minimizes disturbing torques while venting.

The liquid hydrogen vent system is located on the forward bulkhead as shown in Figure 8. It consists of two vent valves, a plenum, ducting, two aft canted vent nozzles, and two inflight vent disconnects. Venting on the launch pad and during ascent prior to Centaur Standard Shroud (CSS) separation occurs through one leg of the vent system and overboard through a shroud-mounted vent fin. After CSS jettison venting occurs through both legs of the system.

This system is symmetrical, which provides equal thrust forces from the two vent nozzles. The nozzles are canted aft 30°, so that a positive forward force is produced on the vehicle. In the event the propellants are not completely settled at the time of venting, or if there is some liquid entrained in the vent gas, the additional thrust will help settle the propellants and reduce any problem.

Two vent valves are used to control hydrogen tank venting. The primary vent valve controls the tank pressure during most of the prelaunch and flight operations. However, a requirement exists during boost flight for a higher tank pressure to react flight loads. The secondary valve is set to operate at a higher pressure level than the primary valve, and serves as a relief or safety valve during this period of flight. A solenoid has been added to the secondary vent valve in order to disable the valve during the long zero-gravity coast periods. This permits higher tank pressures to be attained, and reduces the number of tank vent sequences. Except during the boost phase of flight, the vent valves are controlled by a system known as the Computer-Controlled Vent and Pressurization System (CCVAPS). This system will be discussed in detail in the section termed Propellant Management. 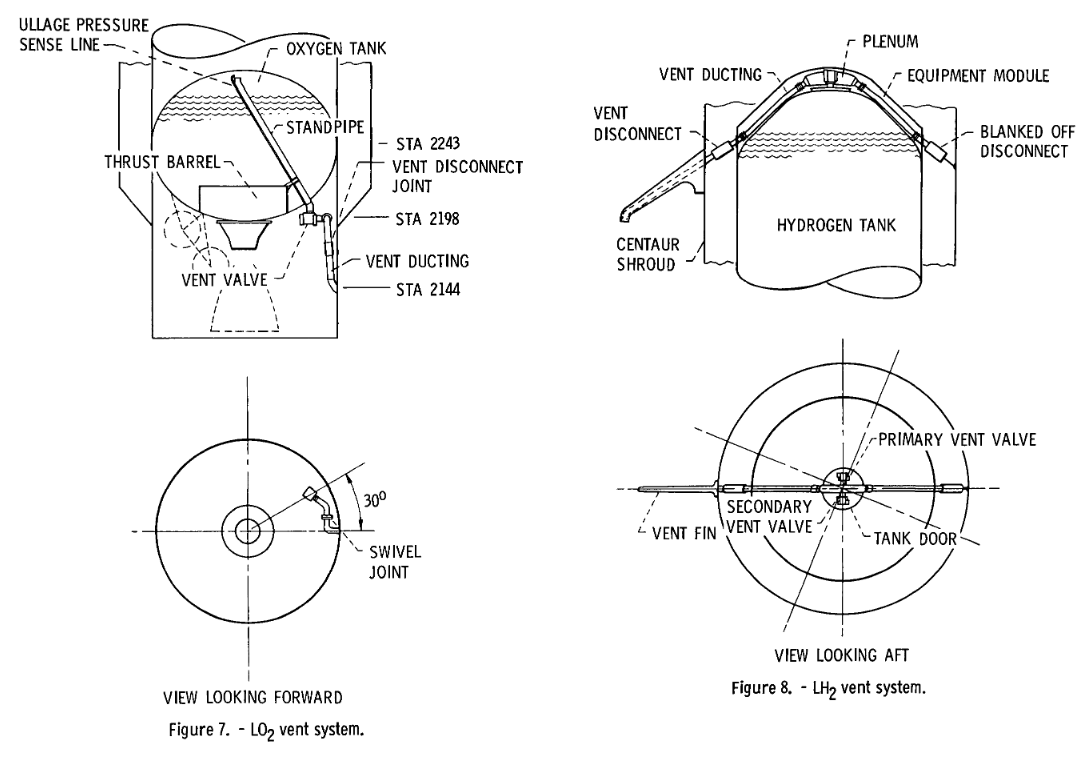 And so on and the same source also describes the use of solenoid valves on the RCS and Hydrogen Peroxide systems, and explains a bit more the interstage purging system.

I know, this qualifies as vintage, but even today's Centaur screams legacy throughout, so I wouldn't be surprised if none of this changed substantially at all since they resolved problems with hydrogen-venting system's fire hazard that destroyed the first Atlas-Centaur (F-1) mid-flight. But I'll keep my eyes peeled for anything newer. Also see Taming Liquid Hydrogen: The Centaur Upper Stage Rocket 1958-2002, Virginia P. Dawson and Mark D. Bowles, 2004, The NASA History Series (PDF).

Possibly not what you're looking for, but the Apollo LM's fuel tanks used helium pressurization, and the helium tanks had burst disks (or diaphragms). When pressure in the helium tanks got too high, several days into the mission, they'd pop and vent to space. This means no more pressure in the fuel tank, but this would normally happen well after the lunar landing, after the LM was abandoned. On Apollo 13, they didn't land, and kept the LM on the trip back, so in both the transcript and the film, there's some discussion of when they could expect the "bang" of the burst disk.

There are 2 different systems that are both called relief valves:

The upper stage of the Ariane 4 had pressure relief valves. These were added after an explosion on an early Ariane 4 upper stage. These valves are used to dump all remaining fuel overboard after the stage has been expended.

The ESC-A upper stage of the Ariane 5 also has valves that are used to dump all remaining fuel overboard after the stage has been expended.

Not the answer you're looking for? Browse other questions tagged launch rockets design upper-stage booster or ask your own question.

20
What exactly causes stranded upper stages to explode?
11
What is the object protruding from the left side of the payload fairing during ULA Atlas V 501 AFSPC-5 launch?
2
Why didn’t the space shuttle external tank have pressure-relief vents?

22
Where are the upper stages for the Voyager/Pioneer stages?
12
Does the Falcon 9 (v1.1) first stage have an explosive Flight Termination System?
2
What are the issues encountered when placing a ladder up the middle of propellant tanks?
2
Why haven’t upper stages used the RL-60 engine?
10
Function of this big pointy thing on the Titan Transtage? Do other upper stages have something similar?
3
Is it true that hydrogen is the only practical fuel for upper stages?
6
Which rockets have their upper stages separating at(around) 100 km?
2
Why didn’t the space shuttle external tank have pressure-relief vents?
4
Why are propellant tanks filled from the bottom?