The electronic "heart" of the International Space Station are the Multiplexers-Demultiplexers (MDMs) located within & outside the pressurized modules.

Note: This answer has changed as of July 23, 2014. Because of the April 11, 2014 external MDM failure and some additional corrections and improvements, both the data and analysis portions of this answer have changed, so read carefully. If you are interested in the previous versions of this answer, please view the edit history.

How often are they replaced? 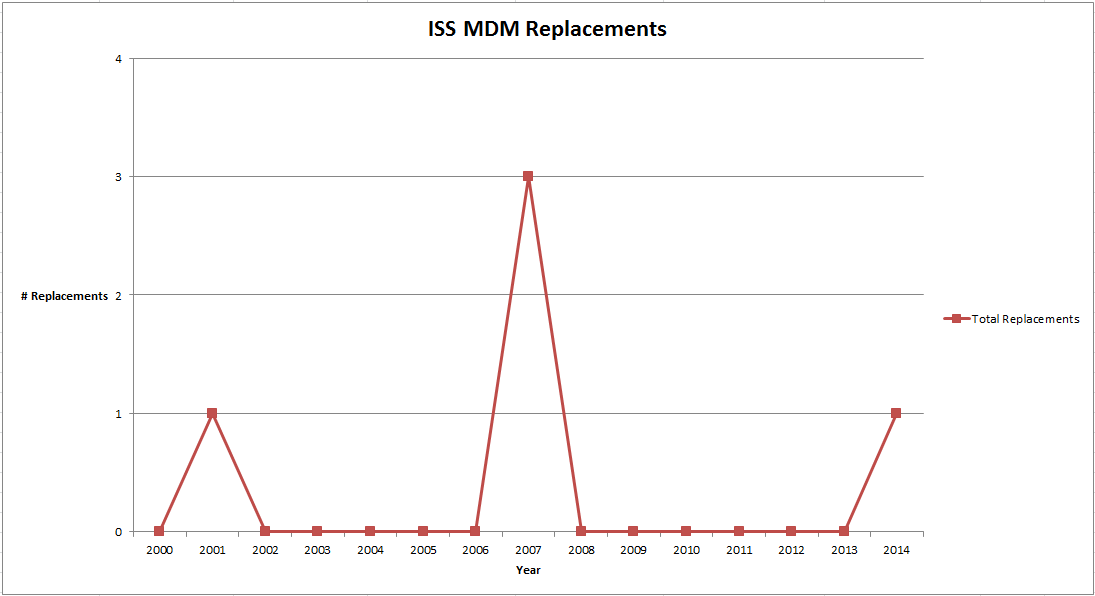 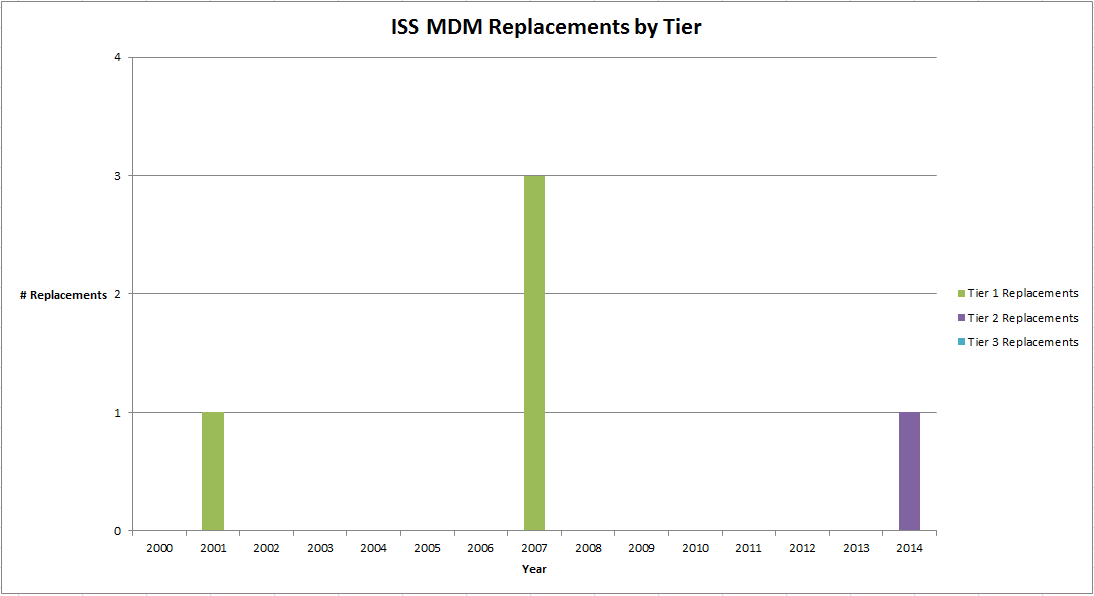 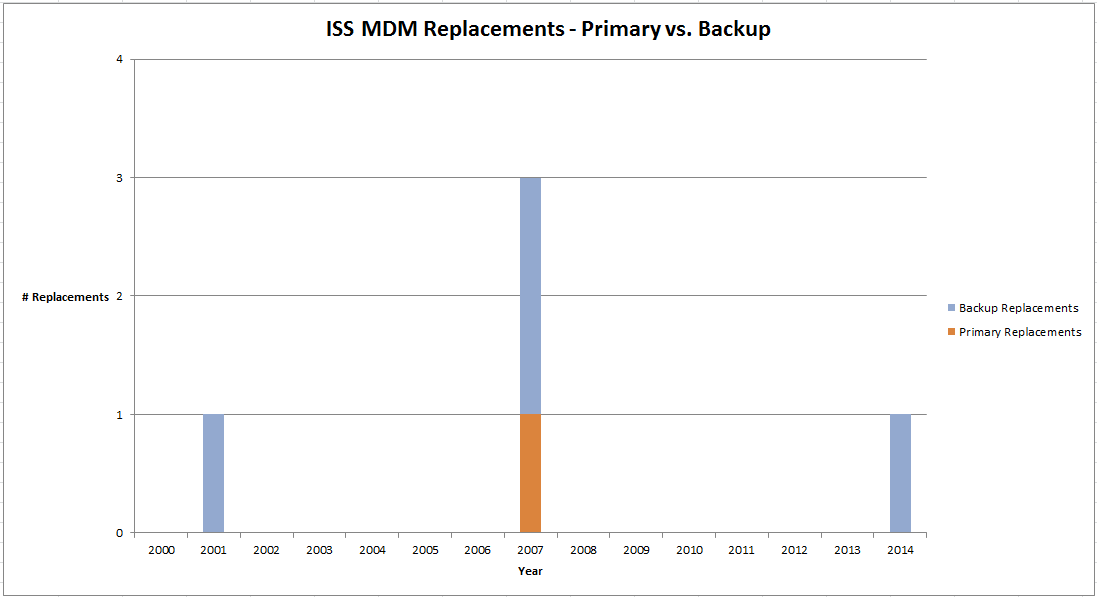 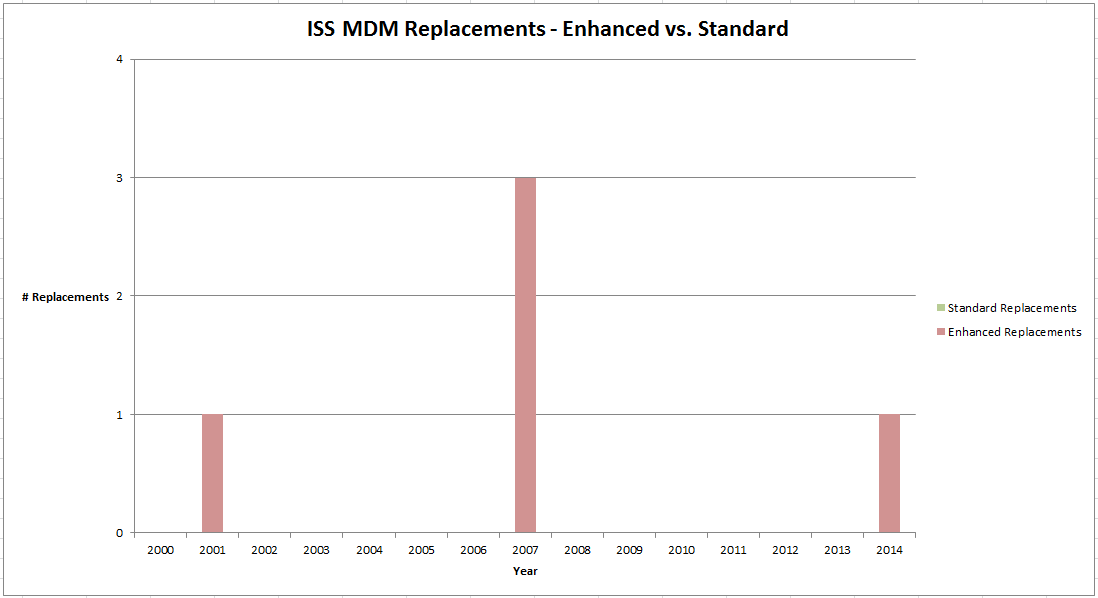 In previous analysis (see edit history), I erroneously included an MDM replacement on a Space Shuttle in 2008 as part of the ISS MDM replacements. I also skimmed over the 2007 replacement and did not realize that it involved replacing not one but three MDMs. The MDMs (best described in this infosheet from Honeywell) are divided into three tiers. There are three Tier 1 MDMs responsible for Command and Control. One is primary, and the other two are backups. There are six categories of Tier 2 MDMs which relay commands to various systems. Two MDMs exist for each category--one primary, one backup. Finally, there are three categories of Tier 3 MDMs which execute commands from the Tier 2 MDMs. In the Internal Systems category are 11. Twelve are Power Systems MDMs, and 8 are External Systems MDMs. In all, that's 46 MDMs.

Can we confidently say that the reliability of MDMs is increasing, that is, can we disentangle the effects of solar cycles from changes in manufacturing quality?

From this it is difficult to derive a correlation between the solar cycle and the need to replace MDMs. However, it is notable that both solar activity crests in the lifetime of the ISS coincided with MDM failures! We cannot say with any confidence that the reliability of MDMs is increasing. It seems that a few MDMs need to be replaced every 6 years or so. The Command and Control MDMs seem especially vulnerable, which is a serious issue.

What are the lessons from the ISS avionics experience for our future missions beyond LEO?

Only five of the 46 MDMs have had to be replaced during the life of the ISS. A few do seem to need to be replaced every six years or so, so it may be necessary to take this into account for future missions beyond LEO. However, since we have little data on the effect of the solar cycle on MDMs, it is difficult to tell what effect increased radiation beyond LEO will have on MDMs. It may be that increased radiation results in a greater frequency of computer failure.

The vulnerability of the Tier 1 MDMs is particularly troublesome if solar activity is connected to the failure, because the more extreme environment beyond LEO may make this untenable with the current technology. On the other hand, there hasn't been another Tier 1 failure since 2007, so perhaps the issue has already been handled.

There are 48 total MDMs on ISS (not including spares) of two major varieties placed both internal (24) and externally(24) on the station. They are Standard (33) and Enhanced (15). The Standard MDMs all utilize an Intel military 386 processor and perform the sensor and effector type IO. There have been two standard MDM and one enhanced failure on orbit resulting in replacement of either the box or the specific card. The Enhanced MDMs have either a higher speed 386 or a Pentium depending on the processing requirement of that MDMs function and perform computational and communication duties rather than the sensor and effector type IO of the standards. The Pentium was the most recent upgrade to the MDMs with 7 internal Enhanced having been upgraded and 2 external upgrades yet to be performed. The other upgrade to the enhanced MDMs was the 2001 replacement of the rotating mass storage device with a solid state unit. There were several failures of the rotating media on orbit prior to the solid state upgrade. Five of the MDMs utilize the mass storage option. In addition to the actual failures, there have been several anomalous behavior incidents which were self recovered or recovered by power cycle. These are mostly attributable to radiation upsets (the design is rad tolerant, not fully rad hard) or power disruptions.

I'm going to stick my neck out and say this: very rarely. Why? After three weeks of me and several others trying every combination of ISS and MDM we could shove into Google, we still only know of Tildal's 1 replacement and 1 upgrade - and that's it.

These things aren't classified, and it would seem that replacing them because of a failure would show up somewhere in Google.

Now, here's the thing we have to remember: lack of evidence is just that: lack of evidence. Therefore, all we can say is that, to the best of our knowledge, MDM's aren't replaced often enough to make a graph and say things about it.

Not the answer you're looking for? Browse other questions tagged iss flight-computer maintenance or ask your own question.

4
What are the MDM's on the ISS, and how many different kinds are there?
4
What level of radiation protection do electronics on the ISS or in LEO need?

52
Why are spacecraft computers obsolete at launch?
16
How often must the ISS desaturate its control moment gyros?
4
What are the MDM's on the ISS, and how many different kinds are there?
46
How often does ISS require re-boosting to higher orbit?
15
How often has the ISS been physically vacant (un-manned)?
3
Commercial grade single board computers (SBCs)
5
What kind of condition do Orbital Replacement Units (ORUs) keep while mounted on the outside of the ISS?
9
Why was the ISS' DC vacuum cleaner replaced with an AC version? Are there "wall sockets" throughout the ISS where it's plugged in?
9
How did Shuttle computers internally represent time?