Why does the ISS viewing times go through repetitive patterns of being always morning or always evening?

In examining the upcoming schedule for viewing the ISS, why does it seem like the AM/PM is repetitive. It will appear in the AM several days in a row, then it will switch to the PM several days in a row. What is it about the ISS orbit that causes AM/PM repetition? Why wouldn't the schedule alternate more often between AM and PM?

Here are some current examples. Notice the repetition of PM or AM based on the four locations. 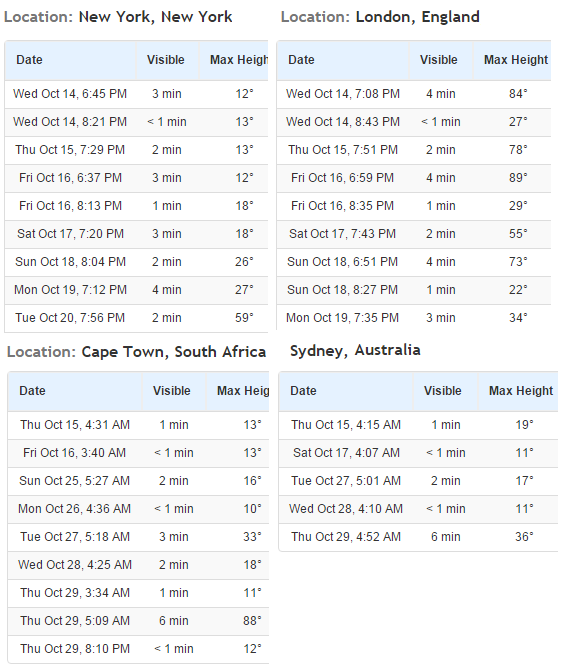 To be visible from the ground, a satellite (including the ISS) must satisfy several conditions:

Those three conditions basically mean that with the exception of a few extremely bright Iridium flares, all visual satellite observations must take place in fairly narrow windows before sunrise or after sunset (depending on the satellite's reflectiveness) such that the sun is visible to the satellite but not the observer.

The reason successive passes are clustered as all-morning or all-evening has to do with the inclination of the orbit, its orbital period, and the rate of precession of the orbital plane (which also depends on the inclination). The ISS orbits very nearly divides a 24-hour period, so the timing of overhead passes does not change very much from day to day. The orientation of its orbit does rotate (completing a full rotation over a span of about two months or so), however, so what you end up with is several days of morning passes (with occasional interruptions), followed by several days of no visible passes, followed by several days of evening passes, etc.

This is further complicated by the changing seasons altering how the terminator between illumination and shadow is laid out across the planet.

Satellites are easiest to see if the satellite is in light, and the sky is dark. This happens most often in evening/morning. In the middle of the night, the satellite is in darkness, and is difficult to see. In the day, the sky is too bright, and again, you can't see it. The satellite, being overhead, has a shorter time without seeing the sun than those of us on the Earth do, thus, it is the best time of day to see a satellite.

It is due to orbital period time of earth and ISS. Earth orbits it self each 24 hour however ISS orbits around the earth each 1.5 hour approximately. It would be possible to see ISS once each 12 hour if earth and ISS were at same orbital period. However now coinsident of two phenomena is needed for visibility. This coinsident is is not in a second. It is in several hours.

45
Can I see the ISS from the surface with the naked eye?
14
Calculating Which Satellite Passes are Visible

32
Have any animals that have been studied onboard the ISS come back alive?
9
How much crew time is required for visiting craft, at the ISS?
22
Why does the International Space Station have a downward facing light?
11
Why does the ISS always point the same side towards the Earth?
19
Does the ISS have zenith-facing windows?
4
What viewing angles does the Hubble Space Telescope use during its orbit in LEO, avoiding the Sun and Earth?
2
Why was AMS-02 launched to the ISS instead on being standalone?
10
Who is the space artist? Patterns on the Spheres robots on the ISS
8
Why are there times when the ISS can transmit audio, but not video?
5
How many time-zone does the ISS cross through during one orbit?