Why don't we take the shortest route to Mars?

As far as i understand we are going on a route shown in the picture. When we can actually let Mars do the travelling for us and just take the short route and wait for Mars to arrive... Won't that be faster? I have added a picture with some arrows to show what i mean. 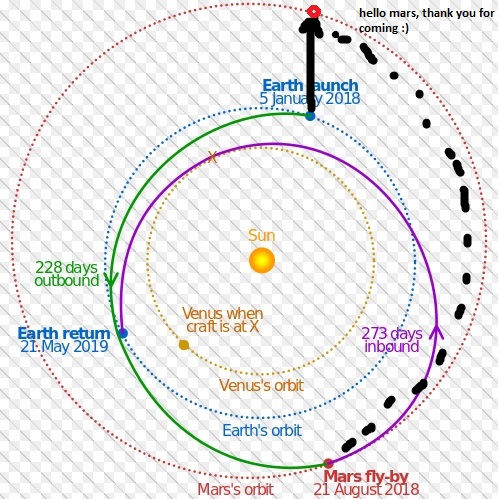 The original picture can be found here -> http://www.extremetech.com/wp-content/uploads/2013/03/Inspiration_Mars_trajectory.svg_.png

When a spacecraft is launched from Earth, it's moving counterclockwise across your diagram at a speed of 30 km/s (the same speed as Earth itself), plus a speed of 10-15 km/s in the direction of the launch.
The trajectory you propose is only possible if you reduce the spacecraft's counterclockwise speed to zero. The fastest launch ever (New Horizons) reached about 16 km/s, so at the moment we can't fly the trajectory you've drawn.

Fuel mass and time of flight are the two main variables to be traded off for deep-space spacecraft. In this case, they decided to design their spacecraft and orbit around a minimum-fuel operation (and also a unique opportunity to do a human flyby of Venus, "Plan B")

If you had a lot (A LOT) of fuel mass to spare, you could use thrusters during the entire flight (accelerating for halfway, decelerating for the rest), you could drastically decrease the time of flight, but the amount of usable mass you'd have at the end of the flight would be negligible (or the takeoff mass would be insane)

1
Why do we travel on an elliptical path towards Mars?

8
Can Indian PSLV take ISRO to Mars?
59
Curiosity: Why did they "reinvent the wheel" instead of using pressure tires?
3
What's the cheapest way to send 10,000 kg to Mars?
12
Why should the Mars 2020 rover drop drilled cores along its route to be picked up later?
16
Can you take a bath on Mars?
5
Could Tianwen-1, Hope, or Mars 2020 image one another en route to Mars?
17
Why don't Raptor engines use CH3Cl instead of CH4?
4
How to obtain 3d data from MER Spirit "Planetary Data System" products/files?