I would like to know the performance for escape mission of the Ariane 5 launcher. More precisely, I would like "LV Performance vs. C 3" curve. My problem is, I can find this info for a lot of launchers but not Ariane. Does anybody have such plot or, at least the value for low C3 (around 0-4)? 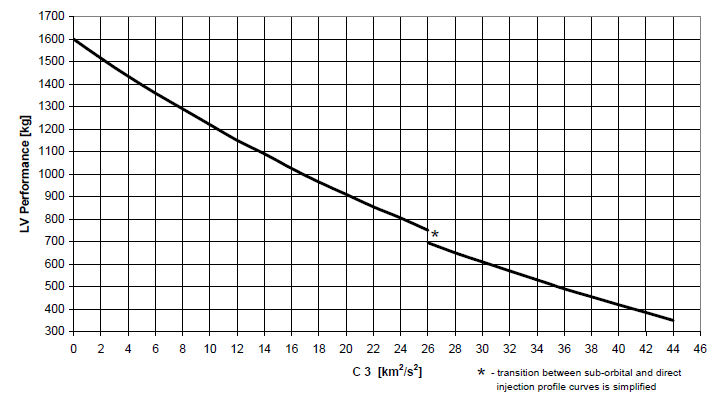 Here the kind of plot I would like. This one is for Soyuz and I found it in the Soyuz user's manual but this is not in the Ariane one's.

The Ariane 5 user manual has the following data:

Using a storable propellant upper stage, through a delayed ignition of this upper stage, Ariane 5, in the A5G version, has demonstrated its ability to carry a satellite weighing 3065 kg, leading to a total required performance of 3190 kg, towards the following earth escape orbit:
- infinite velocity V∞ = 3545 m/s
- declination δ = - 2°

The typical Ariane 5ECA performance on a similar orbit is 4.3 t.

C$_3$ = (V∞)$^2$. And V∞ is related to payload mass via the rocket equation, so you should be able to draw a plot using this one data point. I've no time to do that today though.

Not the answer you're looking for? Browse other questions tagged interplanetary reference-request ariane performance specifications or ask your own question.

15
Why are Europe’s Air & Space Academy and DLR urging ESA and CNES to reconsider the use of solid fuels for the proposed Ariane 6?
5
Which launch sites were considered for Ariane 6?
5
What payloads and launch speeds could a sling launcher get using modern materials on the Moon?
3
What payload mass can different launchers send in Hohmann trajectories to different destinations?
6
What is the accepted methodology for prioritizing scientific exploration missions?
6
Generating plot of LV's performance as a function of the C3 parameter
6
Could oxygen be used in a resistojet in a vacuum environment?
3
What performance specification would be lower for Krypton than for Xenon in Hall effect thrusters?
3
Why doesn't Ariane-5 lift off at T=0 seconds?