What are the "crossing beams of light" in the Cassini images taken during Enceladus plume flyby?

Whilst checking the latest images of the E-21 flyby returned by the Cassini probe, I've noticed that some of them show interesting optical phenomena that I'm not sure I can explain;

For example, on this one, there are two spotlight-like beams of light at the top part of the image, crossing each other just above the Enceladus' plume at the image center: 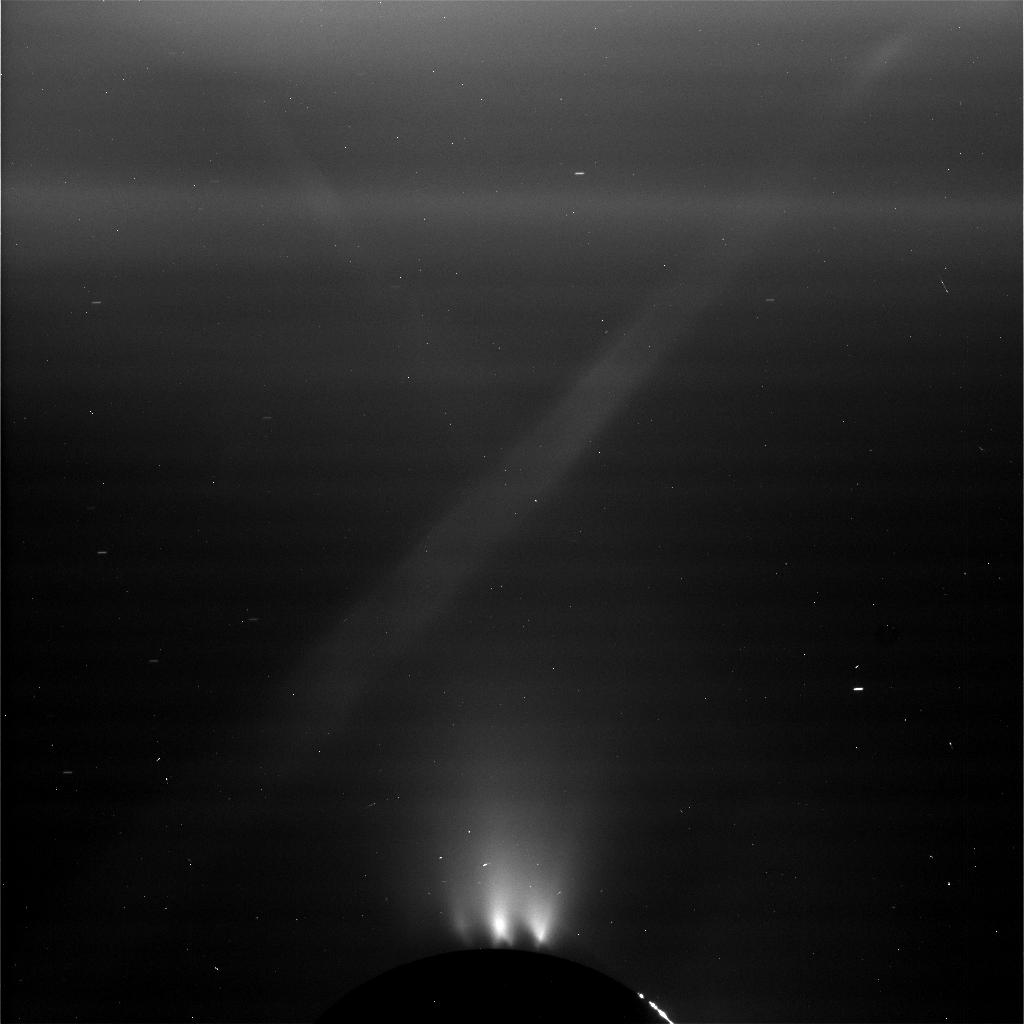 My thinking is that the beam going from the top left towards image center is forward scattered light of Saturn shine through the E Ring, and the beam going from top right towards image center could be coherent backscatter amplified reflection of the Sun by Saturn's main rings, but the latter makes less sense to me as coherent backscatter should be visible when the spacecraft is directly between the Sun and the surface reflecting its light, so maybe there's some other type of light amplification going on there.

So, since I fail to explain it better and I doubt these beams are actual features of the E Ring as they don't appear in all subsequent images (e.g. they're not visible here), neither do I think these are lens flares or other image artifacts as they still appear on several other images (e.g. this one only shows one of them, but not the other), here's my question:

Could these optical effects be explained with the help of Cassini's position relative to Saturn and the Sun when images they appear on were taken? Or are they some other optical phenomena? Or are they actual tangible features, perhaps the E Ring tendrils?

The very structured nature of the features strongly suggests stray light. In fact, in-flight calibration has an example of this (ref. Figure 18). From the text:

Also, when a bright object is located near to the corners of the NAC frame, a bright streak can be seen to extend diagonally across the field of view

Not the answer you're looking for? Browse other questions tagged flyby imaging optical cassini enceladus or ask your own question.

10
What makes materials on the Moon look so different when the sun is high?
6
Cassini flyby through Enceladus plume - How risky is that for the spacecraft and its instruments?
0
Does Cassini have one or two identical main engines - if two, how does that work?
2
What causes these cross-shaped artifacts in TESS' first images?
3
What causes Hyabusa-2's close-up images of Ryugu to be dark in the corners?
2
What are these mysterious white star-like dots near MU69 Ultima Thule? Real objects near the asteroid, noise, cosmic rays, or something else?
4
Did any lander or rover photograph the sun rising or setting during a Martian dust storm?
1
How exactly did Cassini provide rock-solid attitude control to enable high resolution low light imaging? (1.2 arcsec/pixel for narrow angle camera)