Is Hydra of Pluto cut unusually, or just darkened on its surface?

The image of Hydra recently released shows a sharply edged black half oval cutting deep into its bottom as in the image below. Is it dark sky behind an open gap we see, or just unreflective matter on that surface patch? If the latter, could it be similar with the upper right black part of it too, that gives it its apparent shape of an axes head? I've not read or heard any comments about this yet. Is it likely to be figured out from New Horizon data? 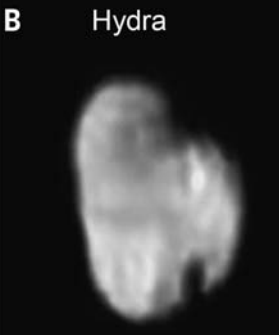 The feature then I suppose is about 6-9 km wide and high, as seen. But with pixels at 1 km its regularity can maybe not be trusted. Hydra is about 10 times as large as comet 69/P, and looks almost more incredibly irregularly shaped.

According to New Horizons team, it is most likely a bilobed body produced by a slow collision of two older moons, and is somewhat similar in shape to comet 67P/Churyumov-Gerasimenko. Here's an enhanced version of same image you attach to your question: 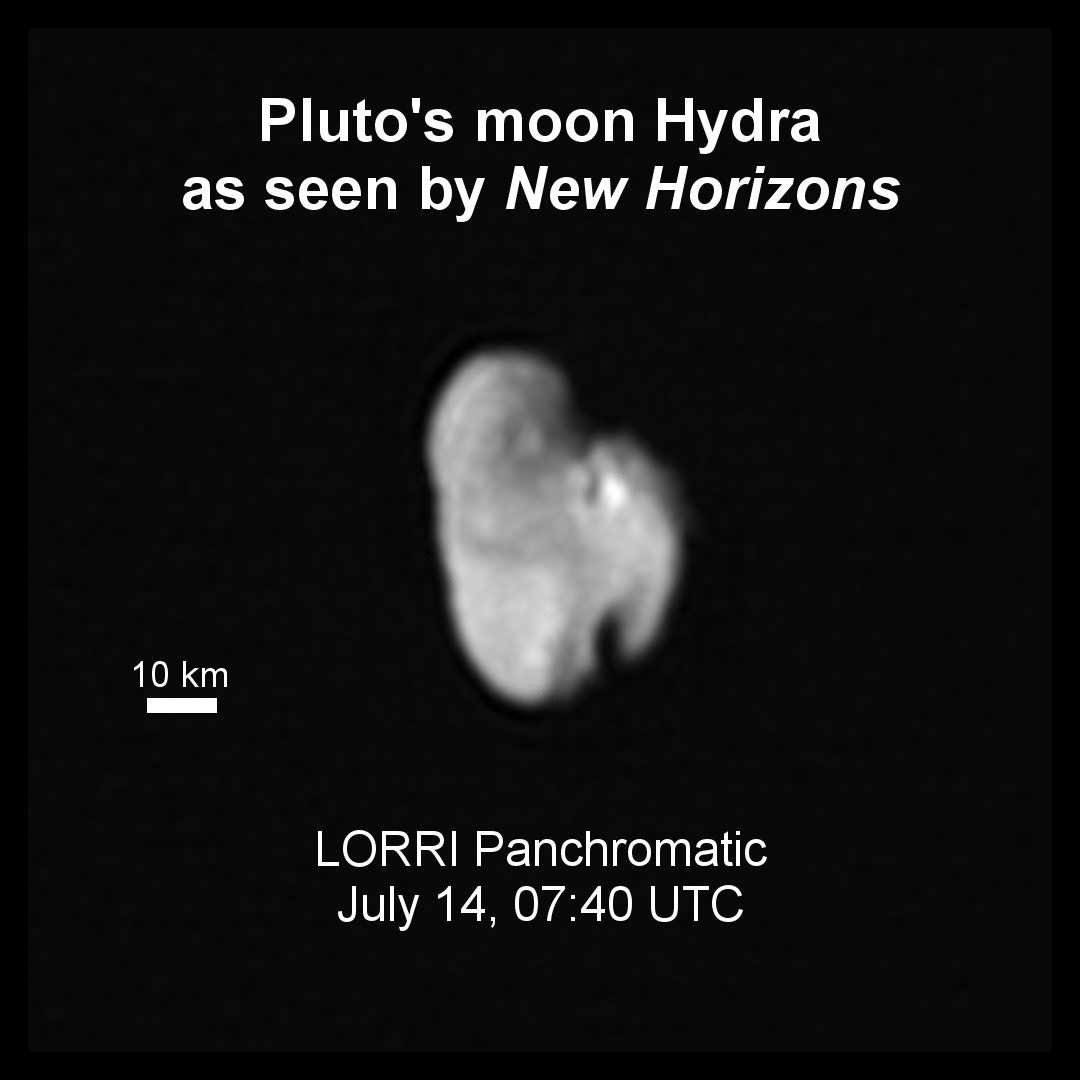 This processing reveals a couple of subtle differences to the raw image. Mainly, with respect to your question, the lower dark blotch appears less sharp (despite the image being sharpened, likely deconvoluted) and the front and back lobe edges don't align any more, suggesting it is a saddle-shaped col more than a cut-through impact site or a darkened, lower albedo surface feature. A sharp (sharper but somewhat shorter after processing) graben-like antipodal depression and no global feature seamlessly transitioning between both lobes further suggest that Hydra might indeed be a result of a low speed collision of two smaller bodies.

Either that, or it's a rather big figurine of a Chow Chow. :)

It seems like it is dark, probably due to a hole (But not all the way through). I imagine I see a dark spot, but not quite the same levels as the black of space. So it's either a dark spot, or a non-penetrating hole, which I suspect the later to be the truth.

Not the answer you're looking for? Browse other questions tagged planetary-science new-horizons pluto moons or ask your own question.

20
At what approximate distance will the New Horizons spacecraft resolve Pluto better than the Hubble Space Telescope?
22
What's after Pluto for New Horizons?
16
New Horizons - How much time will we get to image the Pluto system?
11
Why isn't Pluto a circle on LORRI images?
10
Pluto's satellites other than Charon orbits around Pluto or center of gravity between Pluto and Charon?
13
How long have we known Pluto is red?
8
Why does Pluto change color?
6
Ice Mountains on Pluto