Is it possible to design a completely fail-safe rocket? [closed]

Is it possible to design a rocket, such that if anything goes wrong, the crew and people on the ground will always be in no harm, or are there certain limitations that we will never be able to overcome?

No, there will always be failure modes that may lead to injury or death with any design (see Nathan Tuggy's comment!). Launch and space travel involve conditions that you have to actively control to avoid catastrophe. For example, once the rocket has launched it is also now a wayward missile if guidance and control systems were to fail -- hence why there are explosives installed to self-destruct, as well as why launches occur over the ocean or other uninhabited areas (mostly).

The most important thing that your question alludes to is the idea that failures are bound to happen so the system should fail gracefully. Unfortunately, we learn the most about how to best handle failures by studying catastrophes that have happened. A tragic example is the loss of the Apollo 1 crew, where an in-ward opening hatch was used because it was feared it might accidentally open in the vacuum of space but in the end made it too difficult to escape during an emergency (of course this was by no means the cause or the sole contributing factor).

At most, I could see rocket travel being something akin to commercial airline travel is today. Commercial airline travel, while safe, is hindered by poor pilot judgement, mechanical defects, etc. And don't even start about the terrorist potential! Still, for the most part, it is quite safe, and in fact, I personally don't think anything of the safety factor of flying.

Today, it isn't possible to build rockets as reliable as commercial airliners. Why? First of all, the technology is still in it's infancy. There have only been around 5,000 orbital launches in all history (See Wikipedia count of rocket launches). Compare that to the 30,000 flights in the United States every day! The reliability has to be up to allow for such a convenience. 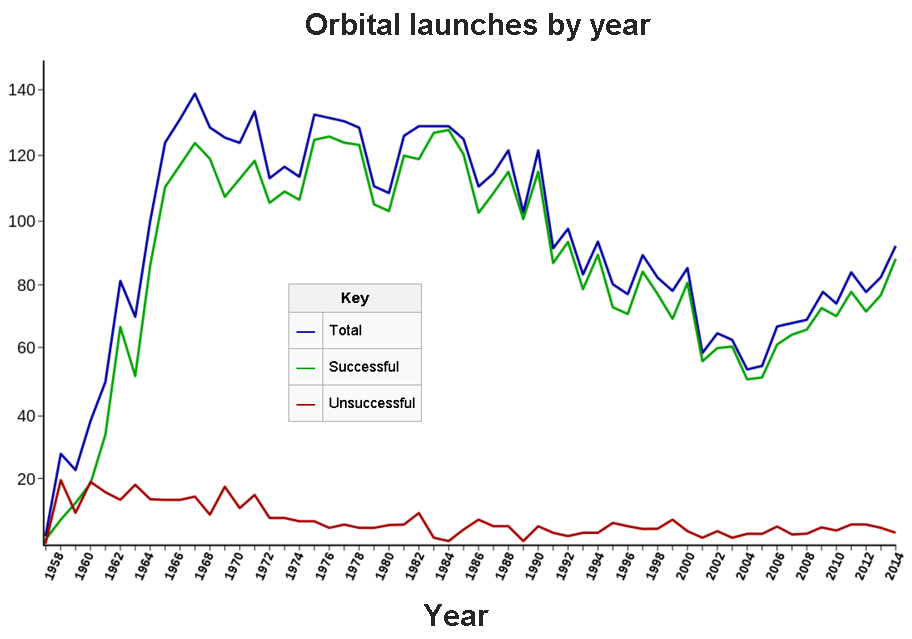 Furthermore, it should be noted that rockets are controlled explosions. Yes, in theory you can say that of a jet or car engine, but they are on a much smaller scale (And don't contain oxidizer). With the oxidizer and fuel, there is much more potential for catastrophic damage. Furthermore, there are huge heat loads makes things even more difficult.

Bottom line, space travel can no doubt be made more reliable, but achieving a fail safe rocket isn't likely to be done anytime soon. One could hope for the reliability of commercial aircraft, which hopefully will happen someday soon.

14
Engineering difficulties towards near-perfect rockets?
7
What exactly does it mean to human-rate a rocket? As opposed to the escape system?
25
Do all launches include self-destruct mechanisms?
6
Did Orion do a pad abort test? A live fire abort test?

11
What would make a rocket sled launch feasible?
7
What is the time breakdown for getting a rocket like the Falcon 9 or Atlas 5 ready for launch?
21
How does a simple construction keep a firing rocket on the ground?
2
Would it be possible to go beyond Jupiter without making any slingshot?
12
For a launch, how is safe viewing distance determined?
23
What is "mission design"? What do mission designers do (if such a designation exists)?
0
Flying saucer shape rocket vs cylindrical shape rocket
17
Is this egg-shaped nose cone a good, aerodynamic design?
9
Will the NASA Commercial Crew "zip line away from the tower and into" this "military armoured truck" in case of emergency? Does the truck have a name?