Are there solar panels available today that would last through various lunar days?

I have been working on a project to build a realistic digital model of a Moon base. I'd assumed that during the initial phase of the base, the power source would be photovoltaic panels. But now that I think about it, could ones available today make it through a week or so of -170oC temperatures at night?

Something about the size of the ISS solar array is probably what is called for, but that array only spends something like 40 minutes at a time in the cold of orbital darkness, and I guess the Earth is always throwing some warmth their way. The solar panels on Opportunity have lasted 10 years on Mars, but they only deal with temperature swings of around 100 K, and it only gets down to about -100oC, and only for 12 hours or so. No rover or instrument on the Moon has ever made it through the night - nobody has even tried yet. (Edit - Chang'e 3 has lasted for almost 2 years, and Surveyor and Lunokhod missions lasted through lunar nights, all these on solar power. Apollo seismometers lasted for years using RTGs. See comments and answers.)

Has it been worked out what would happen to the kinds of solar panels used in space today, if they had to work on the Moon?

Here is a great picture of the ISS panels, just for the mood... 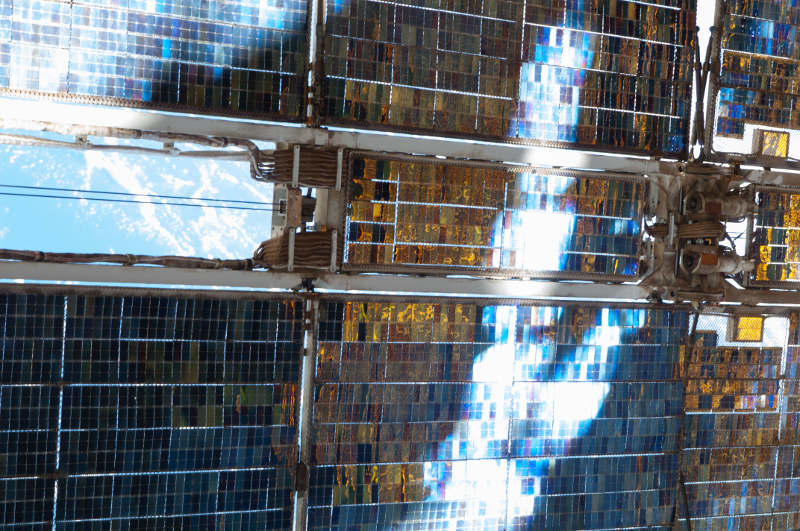 Well, first a correction regarding no (solar powered) rover or instrument on the Moon ever making it through the night and nobody even trying. There has been several instruments and two rovers that made it through at least one, if not several lunar nights:

This doesn't tell us much about durability of today's solar panels on the surface of the Moon, or effects of thermal cycling though, since all of these achievements are probably older than your average readership here.

Luckily, NASA comes to the rescue in Analysis of Stationary, Photovoltaic-Based Surface Power System Designs at the Lunar South Pole, Joshua E. Freeh, Glenn Research Center, 2009 (PDF). Environment selected for for the study is arguably even harsher, though thermal cycling periods average out to about once per year instead of once per month closer to lunar equator. Still, it gives good overview of challenges and assumed lifetime of photovoltaic-based regenerative (using hydrogen fuel cells) power systems.

Dust problem is explained in more detail in "Kicking Up Some Dust": An Experimental Investigation Relating Lunar Dust Erosive Wear to Solar Power Loss, Jeremiah N. Mpagazehe et al., 2013 (PDF) but could be mitigated with, say, Optimization of Photovoltaic Performance through the Integration of Electrodynamic Dust Shield Layers, S. Nason et al., 2014 (PDF) and strategic placement of arrays where they wouldn't be a subject to bombardment of kicked up dust. Radiation environment is somewhat harsher than for solar arrays in GEO due to secondary reflected off the surface radiation, so PV durability would likely be closer to those of GPS satellites orbiting within the Van Allen radiation belts and I'd assume ~ 2% degradation per year instead of more average 1%, tho that's my own assumptions, and micrometeorites are something you'll have to design to live with. Certain PV designs (like, say, multi-junction cells that NASA loves to use for its probes and orbiters despite larger mass than, say, thin film PVs) will tolerate single cell defects better than others, but you'll want to design with some reasonable margin and redundancy in mind.

If I had to design what you're doing, I'd probably go with Stretched Lens Array Squarerigger (SLASR) and state-of-the-art multi-junction cell design. For example, one proposed Europa Orbiter design described in Solar Power for Outer Planets Study (PDF) uses Advanced SLASR Arrays SOA MJ Cell at 45 kW BOL at 1 AU, using four 7.0 m diameter Ultraflex arrays at 513 kg total mass. And that was in 2007, you can assume that state-of-the-art somewhat improved by now.

Some other documents worth considering:

And of course NASA Technical Reports Server (NTRS) is your friend whenever you're looking for information on something that might have been considered before.

Not the answer you're looking for? Browse other questions tagged the-moon mission-design solar-power or ask your own question.

3
Where should a lunar polar ISRU mission land?
18
Why does NASA's Juno spacecraft only have a one year primary mission?
7
Why aren't solar collectors in space solar power concepts placed closer to the sun?
3
ViaSat's 18 kW solar array - largest ever for a commercial telecom satellite?
8
How are the orientations of the ISS' eight independent solar arrays optimized?
8
What was the temperature of the Apollo 11 moon landing zone?
3
Why can't the VIPER lunar rover recharge its 100-day power source using its solar panels?
10
How long is a day on the Moon?