I'm making a Mars probe in Kerbal Space Program Real Solar System, and I have 13 km/s of Delta-V in the lifter itself. I have a cryogenic second stage with a KVD-1 engine, it has 7.36 km/s of Delta-V, and about 4 km/s is used for the orbital injection. Does my lifter have enough Delta-V? I can upload a picture with the delta-v overall, if that helps.

Let's break down your problem into a very simplified launch phase from the ground to low Earth orbit at 250 km altitude. Then we'll use patch conics to get an estimate of the $\Delta v$ necessary to reach a low Mars orbit of 80 km altitude.

One method that I like to use to get ball-park estimates of required launch $\Delta v$ is to first consider an instantaneous impulse on the ground that will give you enough velocity to reach the target orbit altitude (like throwing up a ball with enough speed that it just reaches the orbit altitude at it's peak), then consider another instantaneous impulse at that point that gives you enough velocity to reach orbit.

We'll assume we start at the mean Earth radius of 6378 km (the actual radius at the Kennedy Space Centre could be substituted but probably won't make a significant difference considering our crude analysis). That gives us a difference in potential energy of 2.357 kJ/kg, which translates to a required initial speed of 2.171 km/s.

Once we reach our peak height of 250 km, we'll be at zero velocity and need to accelerate to an orbit velocity of 7.755 km/s based on the following equation.

So that gives us a total launch $\Delta v$ of about 9.926 km/s. If you launch from the equator to the East then you will have an initial speed of 0.465 km/s from the Earth's rotation, so that could reduce your launch $\Delta v$ to 9.461 km/s. This is probably about 5-10% higher than the true value, but a good conservative approximation.

Next we use patch conics to analyze the interplanetary transfer. The figure below shows the interplanetary trajectory using a Hohmann transfer from Earth to Mars in the centre, where we can just assume our heliocentric radii are those of the planets. The spheres of influence for Earth and Mars are expanded on the left and right, respectively, to show the hyperbolic trajectories in each planet's reference frame as well as the planetary orbits.

First we find the semi-major axis of the Mars transfer orbit or MTO, $a_{MTO}$, based on the radii of the orbits of Earth and Mars (which we assume are circular for this analysis).

Then we can find the velocities of the spacecraft as it departs Earth and when it reaches Mars.

In the Earth reference frame, we consider the spacecraft to "depart" when it leaves the sphere of influence or SOI (at a radius of about 924000 km). Assume we can set up our hyperbolic escape trajectory so that our velocity in the heliocentric frame is parallel to Earth's. So that means that in the Earth frame, our velocity at the edge of the SOI will be:

Given the radius and velocity at the SOI we can find the semi-major axis of the escape trajectory as well as the required MTO insertion velocity to leave low Earth orbit:

Note that our velocity in LEO is:

Next we use the same analysis at Mars, where the right-hand side of the above figure shows the spacecraft hyperbolic rendezvous trajectory as well as the target low Mars orbit.

First we determine the relative velocity that the spacecraft will have at the edge of the sphere of influence (again assuming that the velocity is initially parallel to Mars'):

Next we determine the hyperbolic orbit semi-major axis and rendezvous velocity at the periapsis (which will be at low Mars orbit radius):

Note that our velocity in LMO is:

With those two manoeuvres, the total $\Delta v$ for interplanetary transfer is 5.668 km/s. Adding the approximated launch $\Delta v$ results in a grand total of 15.129 km/s, which should be within reach of your design.

I've made a spreadsheet for stuff like this. It assumes circular, coplanar orbits so the numbers are ball park.

Here is a screen capture: 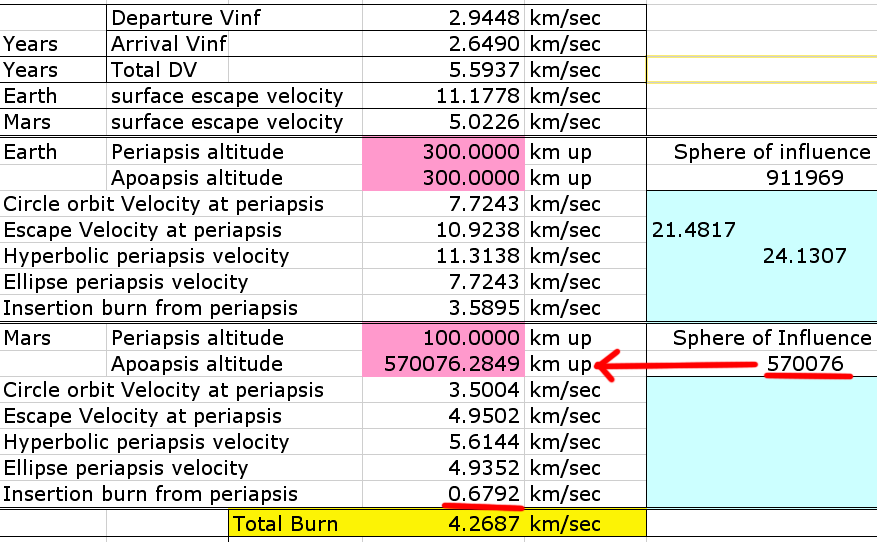 I've set ellipse's apoaerion altitude at the Sphere of Influence. This is a capture orbit, the sun's influence won't tear it away any time soon.

I've set ellipse's periaerion altitude at 100 km. The ship passes through Mars upper atmosphere each periaerion. Atmospheric friction will shed velocity each pass serving to lower the apoaerion. When the apoaerion reaches 400 km or so, a tiny burn will serve to raise the periapsis above the atmosphere.

So at Mars arrival it will take a .7 km/s periaerion burn to achieve capture and eventually a low circular orbit.

Not the answer you're looking for? Browse other questions tagged mars low-earth-orbit delta-v hohmann-transfer or ask your own question.

6
How do you plot a porkchop plot like this one?
1
Transfer to Capture Orbit Delta-V

16
How accurate is the patched conic approximation when performing a Hohmann interplanetary transfer?
11
Mars Orbit Upon Intercept
13
What is the least energetic trajectory design to send uncrewed supplies to Mars?
12
How is rocket engine cutoff controlled?
9
How can I calculate the delta-v correctly, this way does not seem to be correct?
3
Low arrival V-infinity?
1
Delta-V to accelerate to/decelerate from .5c
4
Mars mission success rate vs. outer planets success rate
5
Mars and back, staying only a few days
8
How much delta-v does it take to go from one arbitrary orbit to another?