Would plasma sheathes from reentry heating block optical/UV communications as well as radio?

During reentry, it's routine for the ionized atmosphere surrounding the spacecraft to cut off radio communications for a certain period. As far as I know, this can't be avoided, except perhaps by using aerodynamic lift to avoid sudden reentry deceleration and therefore heating. But that's a radio blackout. What about using higher wavelength EM communications — visible light, UV, or the like? Would those also be blocked by the reentry sheath typical of e.g. Apollo, Shuttle, or similar "flying brick" craft?

The problem is the plasma is VERY bright.

I can't find all the numbers easily but let's find a ballpark figure cobbling some available data together.

After plugging the numbers we have 0.2 gigawatt of energy output on the average. This is the kind of interference we are obtaining, spread over multiple spectra including electromagnetic, visual, UV and sound.

Any broadcast would need to overcome this level of noise - or broadcast on bandwidth way, way low to be discernable from that noise.

Well, there would be some way to win: instead of overcoming the noise, harness it. Imagine some kind of spoilers/fins coated in ablator, that can be extended/turned in modulated way, burning away at a modulated rate. The trail of plasma itself would become the message. But do we really need it? Is there anything the ground control could actually do - help somehow during the reentry if something goes wrong? Would it help with anything other than anxiety?

As it happens, reentry temperatures peak at approximately the same temperature in kelvins as reentry speed in m/s, so assuming roughly 8 km/s, 8000 K is the figure to work from.

This diagram from Ohio State shows that roughly half the emitted black-body radiation at 8000 K is in the UV spectrum: 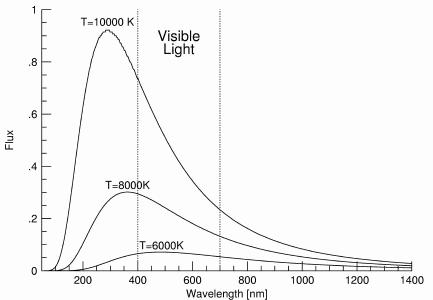 Of course, the atmosphere absorbs middle and far UV quite efficiently, which would be a problem. The absorption mostly takes place in the ozone layer, at around 100000 feet and below. But we can see that Apollo, at least, exited its blackout at nearly twice that altitude, which means that there's no real absorption until quite a ways below the spacecraft at that point:

So it would seem there's no inherent reason UVC (~120 nm) communications would not be possible using satellite or high-flying balloon relays. This could be more generally useful than the Shuttle technique of shaping a hole in the sheath to beam relayed radio transmissions through, since it doesn't rely on specific body shapes.

The re-entry blackout problem was resolved for the Space Shuttle with the implementation of the TDRSS system. It consists of (currently) 7 satellites in geostationary orbit. During re-entry, the shuttle was able to communicate with a satellite "through a "hole" in the ionized air envelope at the tail end of the craft, created by the Shuttle's shape".

Not the answer you're looking for? Browse other questions tagged reentry communication optical-communication or ask your own question.

11
Why do you need a heat shield on Mars entry if the atmosphere is so thin?
1
How can SpaceX receive data from Starship during re-entry communications blackout
2
What was the nature of the visible part of the viscous wake trailing the Apollo CM during reentry?

6
What is the smallest object that would survive a reentry from LEO? What would it be made of?
7
Would radio / wifi and other communications work on Jupiter's moons?
1
How well would optical fiber work on the Moon or Mars?
18
Is there such thing as plasma (from reentry) creating lift?
2
Which theory does this reentry heating rate equation come from?
1
Will future deep space optical communications "ground stations" actually be in space, or on the ground?
2
How did LADEE and LDRC measure it's distance from Lunar orbit to Earth to 1 centimeter accuracy using optical communications?